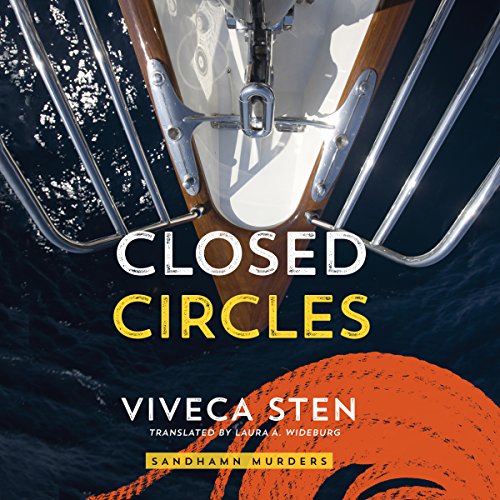 It's a beautiful day for a regatta - until one of Sandhamn Island's most prestigious residents is killed aboard his sailing yacht.

Oscar Juliander was a rich lawyer and deputy chairman of the prestigious Royal Swedish Yacht Club. While at first his death seems like a tragic accident, there is evidence of foul play. Police detective Thomas Andreasson teams up with local lawyer Nora Linde to investigate. As they work to uncover clues, they face resistance from an elite world where nothing but appearance matters.

When the rich and powerful inhabitants of Sweden's idyllic island getaway come under scrutiny, Thomas and Nora must work closely and secretively to seek justice.

I am really enjoying this mystery series from Sweden set in Stockholm and the Sandhamn Island sailing community. The character development, the wonderfully descriptive background setting and the believable interactions between the characters are all excellent, and make the books very engaging. My only trouble rests in the lackluster or really, more specifically, the choppy odd narration. That said, I think the stories as a whole have a lot to offer and this overrides the narration issues. I am determined to push forward and continue with the series. I love the glimpse into Swedish life and thought the books present.

It's a year later, the summer after the events in Still Waters, and an important yacht race is happening at Sandhamn. Thomas is a spectator, a guest on the marine police boat he once captained, when the starting gun fires--and the prominent lawyer, commanding a yacht favored to win, collapses to the deck of his yacht.

Juliander was successful, prominent, a major figure in the yacht club, and well-liked. He was especially liked by women, and had, in addition to a well-connected wife who looked the other way, a string of ex-lovers whom he'd managed to part with on reasonably friendly terms. He also had a lifestyle that seems not to have been adequately supported by the income the police can identify--yet there is no untoward debt, either. Where is the money coming from?

Thomas, Margit, and the rest of their team have potential motives, but no one they can connect to them who doesn't have a good alibi for the time of the shooting. What's going on?

Thomas's friend Nora, a bank lawyer, helps them track down some potentially critical evidence regarding finances. Thomas is dogged and persistent, even has this confusing case drags on, and another murder occurs that appears to be directly connected. It's complicated, interesting, and compelling.

Meanwhile, both Thomas and Nora have problems in their personal lives. For Thomas, Carina is a sweet, charming girl who does really love him--but he's finding he doesn't love her. The age difference doesn't have to be a relationship killer, but for Thomas, Carina's youth is too great a difference. He's been enjoying her cheerful vitality in a way that he increasingly feels has been exploitative, and it's now just making him feel old. For Nora, of course, it's her husband, Henrik, who might have learned something from her near-death the previous year, but apparently didn't. Things are deteriorating, and maybe, maybe, Nora is starting to recognize what she really needs to do.

What puzzles me in the story is that Margit, who is Thomas's older, more experienced partner, has so little presence. More so than in the first book, when she was of course supposed to be on vacation, but why does Thomas seem to be running this investigation? It's not an inability to write strong characters, and maybe we'll see more of Margit in future books.

I bought this audiobook.

Loved it! The book ended, sort of, with a cliff hanger. Can't wait for book number 3 being released in May 2017.

I am hooked! this is book 2 of a series and I am anxiously waiting for the 3rd!

great story the book audio has skips in it so a little frustrating but still can easily follow story. I love audio books!

Closed Circles is the second novel in the Sandhamn Murders series by Swedish author Viveca Sten. It is an excellent suspense mystery set on the sparsely populated Sandhamn island chain a few miles east of Stockholm. Author Sten is a very talented novelist who writes excellent crime/police novels. The protagonists of this series are a male detective (Thomas) and female lawyer friend (Nora) who works for a bank. Nora's husband and their 10 and 6 year old sons are also significant characters.

The story had a slow start and almost too many side stories. Overall, it was a pretty good read.

It’s rare I listen to a series this time I wanted to know what Nora did about her job. I found out and now will she stay in her marriage? Brilliant !
The story keeps my interest.

Solid enough but rather dry.

I liked the yacht-related murder and it's an enjoyable enough read. It's a bit dry though, not as engaging as Sten's other novels.

A good story with a good preformance. Yet there seems to be additional story lines with some characters. one story line only very loosely connects to the others. there is absolutely no reason for any part of that story line. it is just confusing to the reader/listener.

good plot
enjoyed the characters and there were a couple of nice twists. good but not brilliant