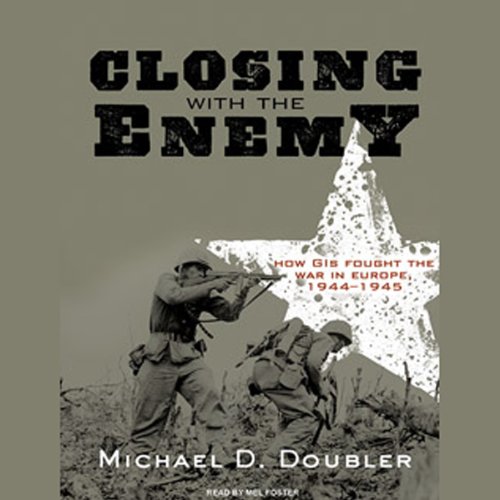 Closing with the Enemy picks up where D-Day leaves off. From Normandy through the "breakout" in France to the German army's last gasp in the Battle of the Bulge, Michael D. Doubler deals with the deadly business of war - closing with the enemy, fighting and winning battles, taking and holding territory. His study provides a provocative reassessment of how American GIs accomplished these dangerous and costly tasks.

Doubler portrays a far more capable and successful American fighting force than previous historians - notably Russell Weigley, Martin Van Creveld, and S. L. A. Marshall - have depicted. True, the GIs weren't fully prepared or organized for a war in Europe and have often been viewed as inferior to their German opponent. But, Doubler argues that they were more than compensated for this by their ability to learn quickly from mistakes, to adapt in the face of unforeseen obstacles, and to innovate new tactics on the battlefield. This adaptability, Doubler contends, was far more crucial to the American effort than we've been led to believe.

Fueled by a fiercely democratic and entrepreneurial spirit, GI innovations emerged from every level within the ranks - from the novel employment of conventional weapons and small units to the rapid retraining of troops on the battlefield. Their most dramatic success, however, was with combined arms warfare - the coordinated use of infantry, tanks, artillery, air power, and engineers - in which they perfected the use of air support for ground operations and tank-infantry teams for breaking through enemy strongholds. Doubler argues that, without such ingenuity and imaginative leadership, it would have been impossible to defeat an enemy as well-trained and heavily fortified as the German army the GIs confronted.

"This important book is a watershed in critical thinking.... Fluently written and beautifully detailed, it is essential for a complete understanding of American operations in World War II." ( Library Journal)

What listeners say about Closing with the Enemy

The writing style may leave something to be desired but the content is most important to any student of WWII -Europe history. Doubler brings out the nitty-gritty of problems in the US training system, the replacement system and almost every other aspect of fighting modern war circa 1942. Only the artillery had their act together. From there he describes how we learned by doing and describes the pitfalls along the way. The content of this book is what makes it excellent. It could have been titled "How We Learned to Fight - the Hard Way"

Day to Day Combat on the Ground

Finally a book which talks about how the army fought the war. But unlike most books which talk from 60,000 feet up, this book talks at ground level. It talks on combat strategy and how they adjusted their fighting approaches given the circumstances.

The book deals with fighting in the bocage, city fighting, river crossings, bunkers, etc. How they fought and solved problems. How ground, artillery, armor and air power learned to work together and how the process evolved over time. The book explains in detail the challenges and the conflicts with old thinking taught in training manuals that had to be adjusted or tossed out completely

I see somewhat less of a discussion on "How GI's fought" and more of an argument in favor of American ingenuity. The author goes through a number of very interesting examples of how the American Army learned to go beyond existing doctrine to find a true combined arms doctrine. He also speaks to the difference between the school solution and what experience had the American Army actually do in combat. I found it a most compelling argument. Certainly if the preponderance of Arms was all that mattered, then what would be true? Looking at the Bastogne fight, the 101st and other units were outnumbered, and for parts of the battle, lacked the preponderance of Air Power which had characterized the Breakout, yet they prevailed. His appendix on sources, was interesting. I noticed he excluded Stephen Ambrose, which has me wonder what he thinks of Ambrose. It was funny to listen to his argument done in very modern military jargon. I get why, but it was also somehow disconcerting. I was reminded of the purpose of doctrine, and it's limitations. I do think he did a great job in explaining how difficult it would have been to have tried to make big doctrinal shifts after the Normandy Landings, since there was no respite. Worth reading, I know I was wrapped in the narrative and didn't want to put it down. My biggest concern is whether his purpose is more to argue a point rather than give a historical perspective. Does he recognize any weaknesses in his argument. I would have liked to have seen that.

What made the experience of listening to Closing with the Enemy the most enjoyable?

This book focuses on how battle-events unfolded, and what consquences they had for tactics and doctrine. Something that is extremely rare even in the military history field.

I'm going to go with Napalm. Even though HE artillery fire had more overall impact on the story, Every time napalm was introduced to a scene, it was a blast.

Good pronounciation. Did a decent job at pronouncing non-english words.

Put your players to 1.25xspeed. The narrator reads with excruciating slowness.

it's a well researched and very informative book, but like many histories, it can be quite dry. It took me two attempts to finally get through the book.

It is surprising that a subject so filled with drama and conflict with the potential of discovering for the listener new information about a very dynamic period of history could be described in so boring a way. Aside from the fact that the author apparently did not know that there were several other nations fighting in Europe following the Normandy invasion - British, Russian, Canadian, Free French, etc - since he persisted in statements like 'when the US won the war in Europe' etc, he really provides little new news. He is making the case that the US army and GI were adaptable and inventive and able to change strategy and tactics to accommodate a battlefield and enemy for which they had not been adequately trained; and, this he does more or less successfully. However, he refutes the view that the US army simply threw huge amounts of weaponry and munitions at the enemy as its chief tactical move - but then proceeds to describe how the US successfully adapted to the new scene by throwing huge amounts of weaponry and munitions at the enemy... This is mostly what I learned from this book after 16 hours. That and the fact that the uniforms which the GIs were given to wear in the European winter were not winter uniforms. This I think is a very important fact since the author cites trench foot due to being incorrectly clad and shod as THE major factor behind the high casualty rates. To me such a huge blunder speaks to the extreme and criminal incompetence of the same leaders the author is constantly praising. Yet the author doesn't pursue any line of inquiry on this uniform deficiency at all, while continuing to exhort the splendid tactical and strategic skills of the US army. What did strike me, sadly, was that so many men died attacking minor outposts or targets which most likely could have been more economically ignored until hunger drove the German soldiers to surrender. Or, just throw huge amounts of weaponry and munitions at them I guess, which was what ultimately occurred. I did gain respect for the common soldier and admire the incredible courage, will to endure, determination, and camaraderie that really held the army together in the face of considerable incompetence at high levels. The reader had a very pleasant voice which got me through the 16 hours despite growing impatience with the platitudes, contradictions and generalizations.

Need maps for perspective. But a long great book. Many insights into the details and the soldiers superb listening

Great listen on US tactics in the ETO

I myself prefer the high level operational studies on WWII. This book was a nice change of pace from that genre for me and I enjoyed getting into the nitty gritty about how the average US infantryman fought the enemy.

Closing With The Enemy.

An OK Book. I didn't find it that interesting cause I have listened to so many WW ll Books it would have to be something I haven't really heard to much about. I still would recommend this book.