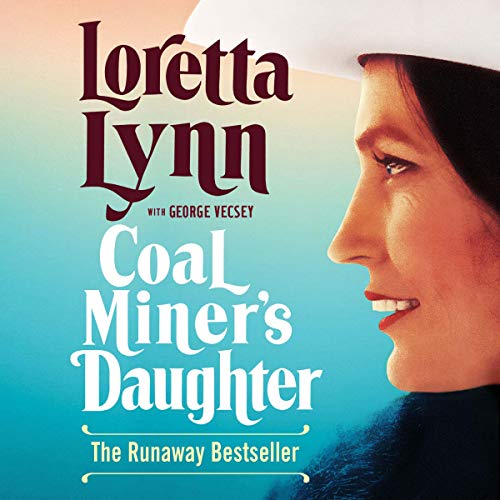 New York Times best-selling author and Nashville legend Loretta Lynn tells the story of her rise from deep poverty in Butcher Holler, Kentucky, to the top of the male-dominated country music industry.

Reissued for the 40th anniversary of the Oscar-winning, Sissy Spacek-starring film of the same name, Coal Miner's Daughter recounts Loretta Lynn's astonishing journey to become one of the original queens of country music. Loretta grew up dirt poor in the mountains of Kentucky, she was married at 13 years old, and became a mother soon after. At the age of 24, her husband, Doo, gave her a guitar as an anniversary present.

Soon, she began penning songs and singing in front of honky-tonk audiences and through years of hard work, talent, and true grit eventually made her way to Nashville, the Grand Ole Opry, eventually securing her place in country music history. Loretta's prolific and influential songwriting made her the first woman to receive a gold record in country music and got her named the first female Entertainer of the Year by the Country Music Association. This riveting memoir introduces listeners to all the highs and lows on her road to success and the tough, smart, funny, and fascinating woman behind the legend.

"Few subjects are too difficult to deal with here, yet there is nothing sensationalistic.... Those reading this can be assured they have met the real Loretta Lynn." (Billboard)

"Engaging reading even for many to whom country music is an alien world." (The New York Times Book Review)

I dunno, I really wanted to like this book. And to have Sissy Spacek read it was like hearing Loretta. So that was a plus! But overall, it’s over the top as far as her innocence to things and life. I can see that from when she was younger, but she’s nearly 90 years old now. And she responds to things that are modern as if she just landed from Mars! Again, I was hoping to love this book. And some of it, especially the beginning is very interesting. But some of the thing’s she talks about had me fast forwarding chapters.

I saw “Coal Miner’s Daughter” when I was 9 and loved it. I’ve been a fan ever since. I got the book for Christmas that year (1981) and read it til I about wore it out. It’s such a wonderful, inspiring story! Lynn writes exactly how she talks and Sissy Spacek narrates perfectly.

This was a wonderful book. I enjoyed hearing the read by Sissy Spacek.
I had never read the original coal Miner's daughter. I thought this might have some updated information that wasn't in the original... of course there seem to be no way to tell. A great story of the life of the Queen of country music.

loved sissy narrating this book in her Loretta Lynn voice! she wrote it like she talks and omg being a kentucky girl like Loretta. I totally related. best audible. experience yet!!

I absolutely loved listening to this over and over again. Brings story to light.

I love to read/listen about other people's lives. The Coal Miner's Daughter was really enjoyable.

Loretta Lynn has always been transparent and she’s done it again. Her life story is like no other!!!! I love this book.

always beautiful always Lorettie always a friend 🤍Wonderful book I loved it twice in my life.

Pure unadulterated Loretta here - straight from the heart. This is an excellent listen, with a great performance by the reader. It's told in no particular order, that is one may pick out any chapter for a great insight into the story of the "Coal Miner's Daughter". Country music fans will thoroughly enjoy this.

Loved this interexting story of Loretta Lynn's life up to 1976.. Sissy Spacek was a good narrator having played the part in the movie