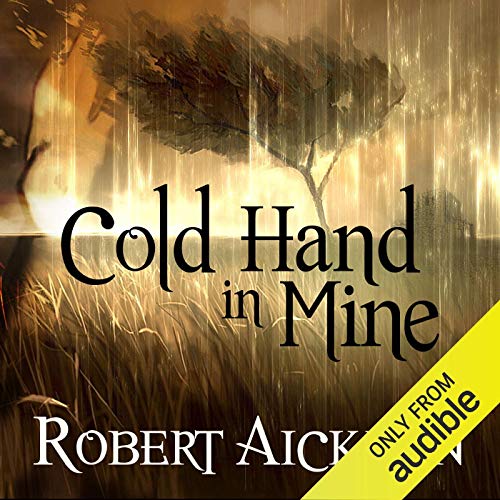 Cold Hand in Mine stands as one of Aickman's best collections and contains eight stories that show off his powers as a 'strange story' writer to the full. The listener is introduced to a variety of characters, from a man who spends the night in a Hospice to a German aristocrat and a woman who sees an image of her own soul. There is also a nod to the conventional vampire story ("Pages from a Young Girl's Journal") but all the stories remain unconventional and inconclusive, which perhaps makes them all the more startling and intriguing.

Cold Hand in Mine was first published in the UK in 1975 and in the US in 1977. The story Pages from a Young Girl's Journal won the Aickman World Fantasy Award in 1975. It was originally published in The Magazine of Fantasy & Science Fiction in 1973 before appearing in this collection.

Robert Fordyce Aickman was born in 1914 in London. In 1951, he published his first ghost stories in a volume called We Are the Dark, written in conjunction with Elizabeth Jane Howard, then went on to publish 11 further volumes of horror stories, two fantasy novels, and two volumes of autobiography. Dubbed ‘the supreme master of the supernatural’, he won a World Fantasy Award and British Fantasy Award for his short fiction, and also edited the first eight volumes of The Fontana Book of Great Ghost Stories. Aside from his writing, Aickman was passionate about preserving British canals and founded the Inland Waterways Association in 1946. He died in February 1981.

Reece Shearsmith is a talented actor and writer. He is most famous for co-writing and starring in the award-winning The League of Gentlemen, along with Steve Pemberton, Mark Gatiss, and Jeremy Dyson. In 2009, Shearsmith and Pemberton won Best New Comedy at the 2009 British Comedy Awards for Psychoville. Reece Shearsmith has just finished filming Ben Wheatley’s horror A Field in England, out in July 2013.

"I think that Aickman is one of those authors that you respond to on a very primal level. Reading Robert Aickman is like watching a magician work, and very often I'm not even sure what the trick was. All I know is that he did it beautifully. Yes, the key vanished, but I don't know if he was holding a key in the hand to begin with. I find myself admiring everything he does from an auctorial standpoint. And I love it as a reader. He will bring on atmosphere. He will construct these perfect, dark, doomed little stories, what he called 'strange stories'" (Neil Gaiman)

"Of all the authors of uncanny tales, Aickman is the best ever… His tales literally haunt me; his plots and his turns of phrase run through my head at the most unlikely moments" (Russell Kirk)

What listeners say about Cold Hand in Mine

Beautifully crafted weird tales that mystify more than reveal. The writing draws one in and captures the imagination. The narrator is a little dull but grew on me as I listened.

What disappointed you about Cold Hand in Mine?

Nothing ever seems to happen. We get a drawn out setting. Then we wait. And we wait for something to happen. Then something flits by and the story ends. Did I miss something? Was there something to miss? I dunno. Maybe I fell asleep.

What was most disappointing about Robert Aickman’s story?

From the description, I was expecting stories of the weird. These are as dry and disappointing as the old Boris Karloff television series, THRILLER. There was nothing thrilling about that series. If you liked that show, perhaps this audiobook is for you.

It's adequate for the job.

I've only listened to the first two stories and have given up. It's possible that there's something good later on, but I don't know if I can last that long.

I did not realise the narration could bring a story to life as much as this did.

Aickman is a master of the creepy tale. great characters wonderful slices of lives under pressure. Always spooky, well written and enthralling.
Narration by shearsmith suits these tales down to the ground

Distinctly underwhelmed by this collection

I struggled to get through this download even though the collection of eight 'strange' short stories is marketed as Aickman's best. The author wrote subtle, creeping horror rather than out and out gore but unfortunately several stories are so subtle that I remained unmoved. Reece Shearsmith's odd narration doesn't particularly help either which surprised me. He sounds unrehearsed, continually halting mid-sentence and putting emphases where they don't seem to fit. The fifth story, The Hospice, is the best of a so-so bunch as its spooky atmosphere does build up nicely, but I wouldn't read any more Aickman after this experience.

really liked Reece shearsmith's narration. he's not as polished as other narrators I've heard, so if that's what you're looking for, I would not recommend. I however enjoyed the fact that it seemed like he was acting every story. as for the content of the book, I'd not read any aickman before but will do so after finishing this. the stories aren't scary in a tropey sense... they make you think more than anything

I could listen to Reece Shearsmith reading me stories all day. The stories themselves were well written, imaginative and enjoyable but I often found the endings a bit sudden and disappointing. If you find the first story in this book a little off putting, please bear with it. I'm definitely going to listen to the others in this series.

Over the past short while I've fallen in love with the works of Aickman, and after listening to The Dark Wine Sea I was excited to get started on Cold Hand in Mine. I did enjoy this collection, but it didn't grab me like The Dark Wine Sea. It's a good listen (or read!) and has some very capturing stories, but I wouldn't say it's the best of Aickman's works. Reece Shearsmith, as always, brings the stories to life, however, and I would definitely recommend this to anyone who is a fan of good old fashioned horror.

What made the experience of listening to Cold Hand in Mine the most enjoyable?

This is very much the dark and evil cousin of "tales of the unexpected"... I don't think I can say anything else without spoiling it!

Brilliantly narrated, the style of the writing is perfect in it's precision but the stories are just not creepy enough. There's subtle horror and there's dull horror, this is the 2nd sadly.

Well worth buying just to hear what a perfectly narrated, perfectly composed text sounds like.

I really like Reece as actor and writer, but even the most talented people have their limitations, and in his case it's audiobook narration. He mumbles and stumbles his way through the text, stops and starts, garbles entire passages as if he's in a great rush to finish and get it all over with. It is so far below a professional performance I'm amazed it was published. I feel bad for being so critical, but it really isn't good.

It's not entirely Shearsmith's fault. Wasn't there a director/producer on hand to politely say "Reece, it's good, but let's try that last bit again. Just relax, there's no rush. How about some vocal warm ups?" It's annoying getting constructive criticism, especially if you're used to being in charge of a project, but it really would have helped here.

Great stories by a modern master of the weird tale. These are very subtle, understated stories of horror, dark fantasy and magic realism. The Swords is a modern classic while other stories include vampires, haunted clocks and sea monsters... Or do they? There are no easy answers to any of these tales and the reader is often left to ponder on their true meaning. Excellent narration by Reece Shearsmith helps pile on the atmosphere. Fully recommended.