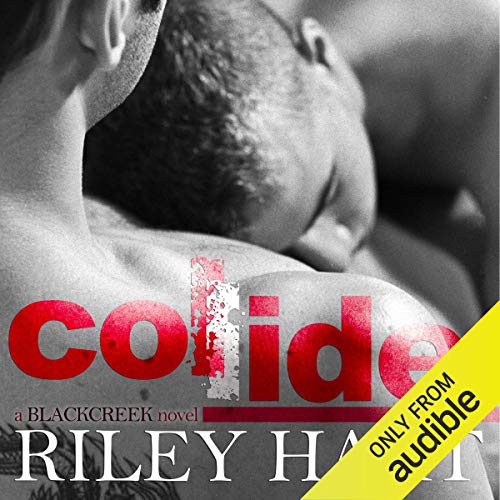 At 10 years old, Noah Jameson and Cooper Bradshaw collided midair when they dove for the same football. For three years they were inseparable...until one day when Noah and his parents disappeared in the middle of the night.

Noah and Cooper never knew what happened to each other. Now, 17 years later, after finding his boyfriend in bed with another man, Noah returns to Blackcreek looking for a fresh start. And damned if he doesn't find his old friend grew up to be as sexy as sin.

Coop can't believe Noah - the only person he trusted with the guilt over his parents' death - is back. And gay. Or that Cooper himself suddenly wants another man in his bed for the first time. There's no denying the attraction and emotion between them, but can they overcome the ghosts of their pasts to have a future together?

What listeners say about Collide

This is another book I was shocked to find I’d never formally reviewed. This was my first “exposure” to the wonderfulness that is Riley Hart. This showcases her expertise at writing “gay first time lovers” so well.
First, she gives us two really well developed MCs with compelling back stories and then puts these guys back in each other’s orbit. That sets us up with not only an interesting, but a believable story.
Second, she excels at the emotion behind the sex. Sure, the physical times are off the charts hot, but even more, they work so well because of all the FEELS. Coop and Noah work slowly toward one another. Each subtly noticing their feelings and then when they act upon them it’s an explosion because we’ve been working up to it right along with these guys.
Third, once they’ve begun acting on their feelings, things are magically “fixed”. There are still a lot of questions, regrets and worries. But… it’s not like they vacillate, just appropriately ruminate and contemplate and proceed cautiously forward. It feels really organic and natural.
I think the flashbacks did a great job of showing us the longevity of their relationship and help us to see some of Noah’s issues as well as Coop’s – beyond the new feelings toward each other.
I really loved this and was so glad to see it come to audio!

Luke Itzvic really impressed me with his work on the # Gearshark series (reviews to come) and he did an amazing job with this! He’s really good at the emotion, timing and grittiness of this story. There’s not much to distinguish Coop from Noah, but it was always easy to know who was talking. He’s got an easy voice to listen to and the sound quality is excellent. This is definitely the best way to enjoy this story and highly recommended.

I love a friends to lovers romance so I was all in when I started this book. Noah and Cooper have a great friendship and an every better relationship. I'm not normally a fan of Gay for You but it works in this book. This one was sweet and sexy all in one. My favorite thing is always when someone important is an ass and doesn't accept the relationship and the couple shrugs it off and knows that all that matters in how they feel. Melts my heart every time!

Luke Itzvic was perfect! I think this is my first time listening to him and I will be looking for more.

Luke Itzvic does a great job with all the emotions

Would you consider the audio edition of Collide to be better than the print version?

I think the audio enhances the story exponentially.

Which character – as performed by Luke Itzvic – was your favorite?

I loved how he portrayed Noah.

Who was the most memorable character of Collide and why?

Too hard - both Noah and Cooper are equally memorable. The emotion runs high in this.

This was a fantastic friends-to-lovers story with a dash of “How did I not know I was bisexual before now?” to spice it up.

When Noah Jameson needs a fresh start he returns to the one place that felt like home during his tumultuous childhood. He reconnects with his best friend, Cooper Bradshaw, after getting clipped with Cooper’s truck. Coop offers a spare bedroom, and then to become roommates so they can continue to catch up.

Noah immediately tells Cooper he’s gay, but Cooper doesn’t care. However, as they spend more time together and Cooper remembers more of their years with one another as kids, his friendship slowly turns to something more, which confuses the hell out of him, because he’s always identified as “straight”. When a bisexual co-worker sets him straight (excuse the pun), he pursues Noah with the same single-minded focus he does everything else.

Noah is gun shy, first because Cooper has never been with a man, and second because he’s determined to live out and not be relegated to any closet.

While the story is great: smoking hot, lightly angsty, and really well done, the star of this terrific story is the narration.

Luke Itzvic does a great job conveying the emotions of the story easily, from friendship to the confusion and then passion that Noah and Cooper go through. He has good character voice distinction, clear diction, tone and steady pacing.

I loved the story, and the narration, and look forward to starting the audio for Stay soon!

Everyone loves a firefighter

a really good romance, I always love when super alpha males learn the squishy feelings of luuurvve, also it was super hot. These kind of stories always make me really sad for all the missed time they had, and also really impatient. like come on dude get over your confused feelings and HEA already, stop wasting time, but then we'd have no story and it'd be like 10 minutes long le sigh. Also I need to say that Like Itzvic was an excellent reader, very good at distinguishing separate characters, I was especially impressed with the range he had from gruff male voices to light female, very talented.

I love this series!

Which character – as performed by Luke Itzvic – was your favorite?

I loved the voice he did for Cooper, super sexy, and really smooth and nice to listen to.
Really painted a picture in my mind!

First of all I wanna say... PLEASE MAKE MORE BOOKS IN THE SERIES!

I finished Collide, and im halfway through Stay right now..
I've never been a big fan of books, or audio books.. but I can't stop listening to these!
They almost make me believe that I have hope in finding someone Like Cooper, Noah, or Braden!

When ever I'm in a bad mood I just listen to this fantastic series and it picks me right up!

Luke Itzvic voice is PERFECT for this series as well.. I just keep coming back for the story, the voices, and everything!

I just suggest.. I want another book on Cooper and Noah! I love their romance and love their story. I got so attached and wanna know more about their lives in Blackcreek
Collide made me Cry, smile, and frisky! It's the perfect book, and perfect series!

Thank you so much for making this series, Riley Hart! xoxo

I just read "Him" and loved it. (Same genre) I just didn't buy the storyline of this book which ironically is very similar to "Him". Cooper is this male slut Uber macho guys guy. Noah shows up and Cooper instantly questions his sexuality. I guess I needed more trepidation on Cooper's part to make it seem believable to me? I'm returning it almost halfway through. I wanted to like it.

Such an emotional story. The book is amazing I can't wait to continue on to the next one.

I mostly enjoyed the audiobook. My issues with it were minimal and for the most part, personal. (like Cooper's voice sounded a bit painful for the narrator and vaguely Jenson Ackles' Dean-like) I do enjoy hearing how other people READ books, that's probably my favorite part of audiobooks. I enjoyed Luke's interpretation of Coop and Noah.

It's not unreadable. But it's not good. The sex scenes are pretty much the entire book and very repetitive. And I hated Cooper. I've read a lot of book in this genre, and this was bleh.

if you're looking to listen to smut every 10 min

the book was cliche in its premise... not offering much in terms of story. all in all it wasn't worth the 7 hours it took to listen to.

Nothing ground-breaking about a gay romance between two all-American boys in a small town. But enjoyable enough - though not always obvious who is saying what from the narration.

Friends meet after years apart and the effects are drmatic but all is well in the end. lovely story with some dramatic moments.

Great story, loved Cooper and Noah. I've near listened to this narrator before, he was excellent. 🙂

the performance was the best part and I didn't rate it. otherwise the book needs a good editor, and the characters need to be something other than 2d.

This was a good old fashioned love story with quite a lot of love making!

Towards the end an event happened to which I thought, "oh not again", a tragic ending. I won't spoil it, but worth getting to the end, whatever the outcome. 😉

This was an awesome story. loved every minute of it. Riley Hart's writing is fantastic!