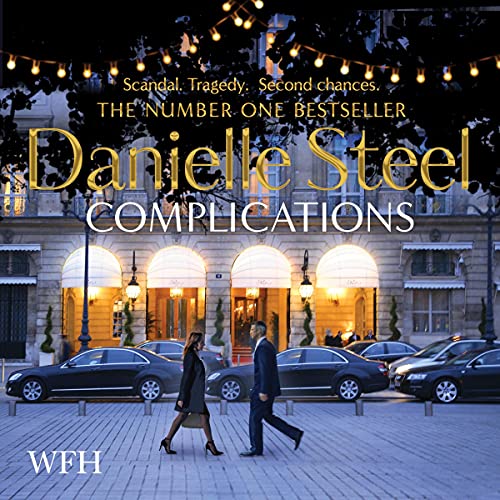 Complications is a riveting story of scandal and tragedy set against the backdrop of an exclusive Paris hotel from the world's favourite story teller, Danielle Steel.

Known for its luxury and discrete service, the Hotel Louis XVI in Paris has attracted an international clientele of the rich and famous for many decades. Now, after extensive renovation and under new management, an esteemed group of loyal returning guests is set to descend upon the hotel, joined by a group of new faces who have managed to secure coveted reservations. Anxiously awaiting the guests is the new manager, Olivier Bateau, and his assistant, Yvonne Philippe. Both strive to continue the hotel's tradition for excellence, but even they were not prepared for what happened on that September evening.

A successful art consultant arrives to seek solace after a brutal divorce and is surprised to find new love. A new guest contemplates ending his life and ends up saving someone else's. A high-profile politician's career will be tarnished with scandal after a mystery meeting conducted at the hotel. And a couple will find their once-in-a-lifetime trip struck by a medical emergency, leaving the future they've longed for hanging in the balance.

Rocked by the events of this one fateful night, guests and staff alike brace themselves for the aftershock, as it quickly becomes apparent that there is much more drama in store....

Danielle Steel tells an unforgettable story about a famed hotel, where a few complications quickly escalate into a matter of life and death, changing the lives of everyone who passes through its doors.

What listeners say about Complications

Well the book was a change from serious books to a light level. I cannot believe that "Complication" is a best seller. These homosexual scandals are a little dated. . Like we had a openly gay Taiseach governing Ireland. Like two rare illnesses that occur in the book is kinda suiting the author not the story. There are a large amounts of reppeatition mixed through the book. No not for me