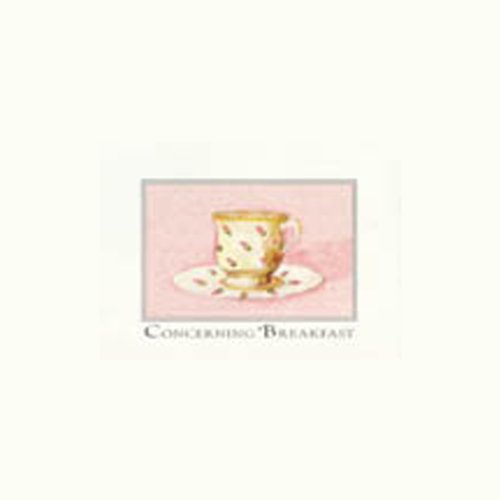 A couple of years ago, Annie was volunteering at a public radio station. The reporters who trained her told her that asking people what they had for breakfast was a good way to set your recording levels and make the interview subjects more comfortable. To Annie, what people had for breakfast was the most interesting part of the conversation. In this season of feasting and family, and the anxiety sometimes associated with it, we have a featured program about eating, and not eating-precisely, about Anorexia.

Credits: Produced and engineered by Jay Allison; Written and co-produced by Annie Cheney; Editorial help from Christina Egloff; Thanks to Ira Glass and This American Life; Funding for Jay Allison's Life Stories series comes from the Corporation for Public Broadcasting The teacup illustration on this page is by Annie's mother, Virginia Burns Cheney.

Postscripts: On Vivian: Vivian's alive and eating in New York City. Since she was interviewed for this story, she's rediscovered life and is making a lot of progress in her recovery. She's started riding horses again, which she hadn't been able to do for years because of her illness. She's also enjoying all kinds of new foods and restaurants. She and Annie eat out together whenever they get the chance. On Annie: Annie's living in Chinatown in New York City, making radio stories in her studio/bedroom. She received the Emerging Artists Radio/Sound Art Fellowship from The Media Alliance in June of '99 and is working on a story about women transit workers. Although her apartment is too small for a piano, she still plays her parents' grand whenever she visits.

Jay Allison is the Peabody Award-winning producer of The Kitchen Sisters.

A Pandora's Box... Simple, yet profound.

Short, but eye-opening and creative. I would encourage everyone to listen to this beautifully-performed window into a terribly misunderstood condition/ disease.

Annie looks back on her past, using interviews to fit the pieces together and reflect on her experience. The piece allows us to understand anorexia, acknowledging it as a legitimate disorder. The story is woven seamlessly, with musical elements and other motifs that emerge and intensify the emotional depth. I recommend this piece, especially to those who have struggled with eating disorders or would like to understand those who do.

Thought it was about eating and health when it turned out to be about anorexia.