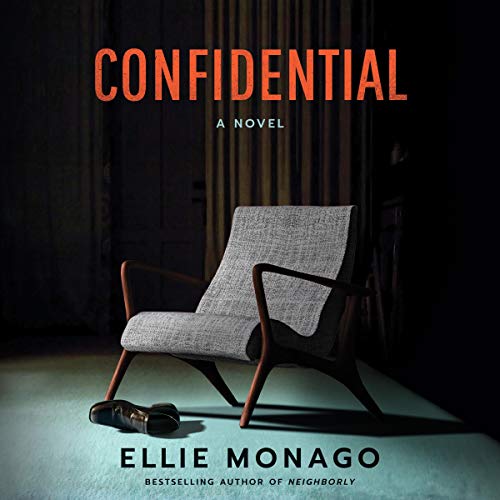 From the bestselling author of Neighborly comes a twisty novel of psychological suspense about the lies three women tell to survive, and the ones they’d kill to keep hidden.

Everyone loves therapist Michael Baylor. He’s handsome. He’s respected. And he’s provided a safe place for his female patients. Now he’s dead, and a detective is casting a tight net for the murderer - because the good doctor may have done some very bad things with the women who trusted him. That’s if their stories check out.

There’s Lucinda, who struggled to process her childhood trauma even as she was falling in love with Dr. Baylor. Greer, an accomplished career woman who was torn by her sudden desire to have children, so she went to Dr. Baylor for help but may have gotten more than she bargained for. And then there’s Flora, a beautiful former patient who’d been on intimate terms with the man she called Dr. Michael for two years. Some might even say she was obsessed with him.

Three women caught in a tangled web of lies and secrets. And each with a motive for murder. With so much at stake, can any of them be trusted to tell the truth?

What listeners say about Confidential

I hate when there’s a good story with

I hate when there’s a good story with a terrible narrator. I can’t tell if one of the actresses
Is acting, but she has the most annoying accent and semi lisp. It’s like she’s faking a euro accent. Not sure if I can finish this thing.

Actually triple Ugh! First 30 seconds turned me off - stupid dialogue, first narration ever heard that combined trying to be sexy with a German/Slavic accented lisp. I don't care what the story is with this ridiculous delivery. A free Kindle read-listen that cost too much for my sanity.

especially the twist at the very end- Damn! it changes your entire perspective on Everything you’ve heard up to that point.
i also really appreciate the different narrators for all the different characters. it really adds to the story line. well Done!

I did not like anything about this book. The performance by Flora was extremely difficult to listen to and the book was not good at all.

But I finished it so I will give it a couple of stars. It was all I had downloaded on Audible while traveling so I listened to it. The narrator performed the voice of "Flo" in a manner that ruined the book completely. It was hideous and awful! I turned it off several times until I sort of got used to it.
I think the idea for the plot was a good one. But then, the characters were developed in a way that had me not caring what happened tothem. The ending was, I think (?) supposed to leave the reader wondering who was crazy and delusional and who was evil,but by then I was apathetic about such character quirks due to the too many liberties taken by the author to misname mental health diagnoses, showing how little the author knows about psychology.
I don't recommend listening to the book at all. Reading it might be OK if you are wanting some mindless fluff to unwind, and don't mind the goofy inaccuracies about the field of mental health.

Good twist for a psychological thriller, just not my kind of story. Great buildup of characters, you can almost picture them (if you don't think too hard on the voices.)

DO NOT spend a CREDIT to listen to this book.

THE worst narration I’ve heard on Audible!
The story is moderately interesting but becomes tedious after awhile; however, the worst part is the listening!
Reading this book is far better than listening.

I rarely write comments in reviews, but hopefully I can save someone else from purchasing this book. Story was somewhat predictable and not a single character was relatable, however I kept thinking perhaps it would improve, so I stuck with it. I routed for no one. Still, the most awful part of this book was the narrator who attempted to portray Flora. What kind of accent was that supposed to be?? Certainly not Russian, which I believe is where the character is supposed to be from. And why distract us even more by adding a speech impediment to an already botched accent? It was offensive and served no purpose, other than to completely ruin an already mediocre book.

I couldn’t even finish the book! The narration was so awful, I didn’t get past chapter 3. I have no idea if the story is any good or not!

Loved it! Great dialogue! Enough mystery to keep you listening to the end! Narrated brilliantly! I highly recommend this book!