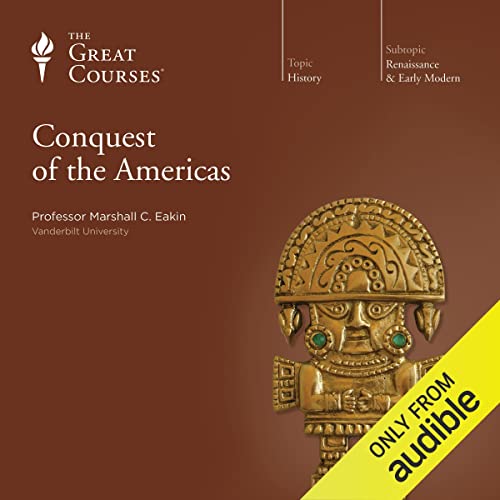 Conquest of the Americas

Was Christopher Columbus's voyage to the Americas in 1492 the most important event in the history of the world?

Professor Eakin's provocative answer is a resounding "Yes" - as he presents his case in an intriguing series of 24 lectures. He argues that the voyage gave birth to the distinct identity of the Americas today by creating a collision between three distinct cultures - European, African, and Native American - that radically transformed the view of the world on both sides of the Atlantic. These thoughtful lectures will remind you that when Columbus completed his voyage, he found a people unlike any he had ever known, living in a land unmentioned in any of the great touchstones of Western knowledge. You'll learn how the European world, animated by the great dynamic forces of the day, Christianity and commercial capitalism, reacted to Columbus's discovery with voyages of conquest-territorial, cultural, and spiritual - throughout the New World. And you'll see the traumatic consequences - not only for the native peoples of the Americas, but for the people of Africa, as well, millions of whom had their lives altered by the transatlantic slave trade that resulted. Yet these lectures are far more than an account of heroes and villains, or victors and victims. They form a dramatic, sweeping tale of the complex blending of three peoples into one-forming new societies and cultures that were neither European, African, nor Native American, but uniquely American. While Professor Eakin readily identifies his own interpretation of events, he generously showcases competing views, and you'll benefit enormously from the many works he cites for further study.

What listeners say about Conquest of the Americas

Good lectures and flow. The guy is a great story teller, which obviously helps. The only parts I took issue with were his own contradictory views of Christianity. First he states Christianity is, at its core, a militant conquering religion. Then he shows that all the great humanitarian efforts toward the Indians were driven by hardcore Christian monks and priest who hated Spanish treatment of the Indians. Was Also was pretty light on all the brutal treatment of Indians to there own. Slavery, human sacrifice and a rigid caste system we’re all in full force before European contact. Not to mention a virtual absence of material development for the common Indian, Which he does a good job showing. The tone is just very anti-European, which isn’t surprising. Just wish we could acknowledge the obvious benefits of western culture. The whole disease narrative is not the fault of the West anymore than the bubonic plague is the fault of trading with African and Arab merchants. But again, great series and worth listening too.

Cons: lecturer is not fair to the Spaniards, especially Cortes. He doesn’t explain that the reason the Spaniards attacked and killed the Aztec nobles after capturing Montezuma was because they uncovered a plot to kill all of the Spanish. Montezuma was in on the plot also.

IMHO, ISIS/ISIL terrorists have nothing on the Aztecs. Actually, ISIS couldn’t compete with the slaughter that the Aztecs perpetrated on their enemies. Human child sacrifice, slavery, cannibalism, imperialism, etc. They weren’t nice and if they existed today we would send a multinational force to take them out.

For all of their faults the Spanish actually grappled with how to do right by the natives. You might not like their approach but they ended the Aztec hegemony.

Karl Marx was quoted in the first five minutes!

I expected better. This is the same postmodern neo-marxist deconstructionist garbage which is being touted as higher learning in college courses. If socialist indoctrination is your goal, save the 100k in student loan debt and study these "Great Courses". If you want to learn factual history, move on.

Not a Great Course, not even a good one

What would have made Conquest of the Americas better?

The Professor needs to seriously re-check his scholarship. Minor errors in facts might fly in a lecture, but not in a recorded medium. Tecun Umam was not the leader of the Quiche Kingdom. The concept of "race" is not wholly divorced from biology, although it remains a cultural construct.

Not another course by Eakin.

Yes, the course needs a narrator. Eakin stumbles over this words, stammers through his narration, and tries to land awkward jokes. He is not a talented narrator.

Few. The lecture on the Jesuits was not bad.

This is not a course on the "Conquest of the Americas." It is a course on 16th to 18th century European colonialism in the Americas. While somewhat related, colonialism is not conquest. They are not equivalent terms. The course needs to focus on the military encounters between Spain and the high cultures of Central and South America and their missteps in the Caribbean. The course needs an expert in that field, not a Brazilian historian.

a new perspective for me

What made the experience of listening to Conquest of the Americas the most enjoyable?

Having realized that I knew a lot of European history, and that I knew next to nothing about Central and South America, I thought this course would be a good listen. And I was rewarded many times over. History I knew but only in a narrow context, people I'd heard of but not in any solid context, and events also, came together in a worldwide story. I kept thinking "of course!" as the course unfolded. Having now been to Central and South America quite a few times, this course has really added a great deal to my appreciation of all the Americas, North to South, and how, when and why we all got here, and more interestingly, how our history has been shaped.

What does Professor Marshall C. Eakin bring to the story that you wouldn’t experience if you just read the book?

His personal experience(s) in the area.

I can't give the book 5 stars because of the annoying canned applause at the end and beginning of each chapter.

Where does Conquest of the Americas rank among all the audiobooks you’ve listened to so far?

One of the best.

The pace of the narrator's voice and the passion for the thoughts he delivers.

What does Professor Marshall C. Eakin bring to the story that you wouldn’t experience if you just read the book?

Passion for the discipline he teaches.

A superb course with many pointers on the major scholars and frameworks that can be found within this historical field. I now have a huge reading list of titles he mentions throughout (including his own work on Brazil). The author has an excellent grasp of the peoples and experiences right across North, South and Central America. Really, really engaging and interesting.

What an amazing lecture

The structure and depth of this lecture is hands down one of the best. If I had any criticism it would be I would have liked a little more attention paid to Ango and Franco America with respect to Latin America. The last three chapters leave something to be desired, but overall this is a masterpiece!

Highly recommend this course and Professor Eakin’s other series on revolution in the Americas. I’ve done 20+ history courses on audible and his are definitely among the best.

The material is dense and detailed but fascinating, and he spends a lot of time placing events in their broader (European) historical context. These courses really changed my perspective on early US history - something I thought I understood well!

Very good, peaks early on. And I have fifteen words to use in order to press the submit button, cheers

I thought this would be purely about the conquistadors. However the remit was much larger. I really enjoyed the beginning part but as this progressed to North America it was scanty on details. The last few lectures on race and ethnicity should be in another social set of lectures or condensed. I would have preferred more details on the Caribbean and colonial wars in the context of world and European history and if North America is to be covered more on the expansion West and it's reasons and outcomes as well as wars versus Mexico.

Fascinating set of lectures giving a lot of context around world events and how the conquest of the Americas happened and evolved, including a breakdown of the different styles and struggles. Very knowledgeable and passionate author. Thank you, one of my favourite classes