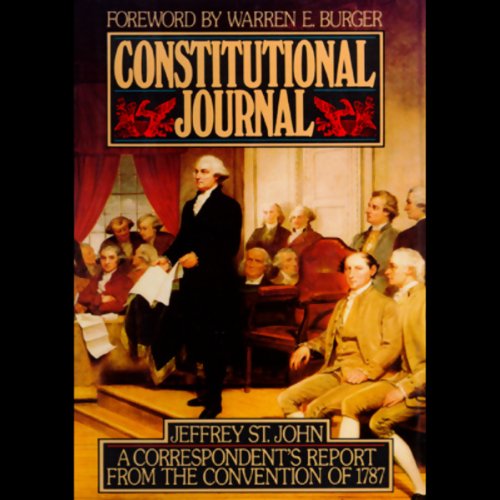 You are there, in 1787 at America's constitutional convention, with the inside story as veteran print and broadcast journalist Jeffrey St. John "reports" each day's proceedings, flavoring his dispatches with quotes from private correspondence and notes of the delegates.

He captures the frustration, conflict, hope, and despair of America's founders during that long, sweltering summer session, as the political future of the country hangs in the balance. It is an enthralling story, never before told in this journalistic form.

"[Riggenbach] has a good sense of how to make history interesting....[He] gives the delegates a forum to air their views, but his voice never intrudes on the weight of their words." (AudioFile)

What listeners say about Constitutional Journal

Awesome!!! A must read/ listen to for any American

This book is written in a format whereby the narrator is newspaper reporter who is reading you his article. The article is a report of the day by day happenings during the Constitutional Convention ( which is a fictitious tool to get a very good chronological story told.) He reports on various things said by the delegates and Reed's various the letters that any members of the Convention sent to anyone else and vice versa, as well as well as various other contemporaneous documents and news articles from other places. The result is an easy-to-understand, very descriptive and detailed, chronological picture of the Constitutional Convention and who said what about the clauses of the Constitution on which they were working at any given moment. The REAL original intent.

I was excited by the conceit of this book, which is that you're getting a backstage view from a journalist of the Founders as they deliberate on the Constitution. But there's not really a lot of insight here, just a lot of annoying journalistic cliches as the "reporter" sends his reports.

The news style format may not be to the liking of some. I found it to be unusual. I was able to set that aside and listen to the information that was presented.

There were things that I'd already knew, yet much that I did not and that was what I received from this book which I found to be helpful.