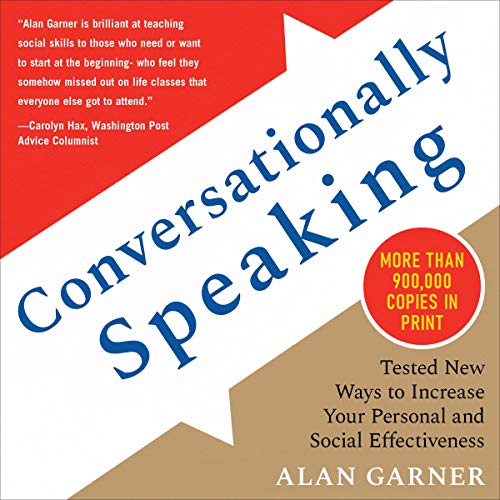 Almost One Million Sold! Conversationally Speaking has become the most popular book in the world teaching conversation skills. Millions of people have used it to learn the secrets of effective communication. This revised edition provides more ways to improve your conversation skills by giving you strategies that work for starting conversations, asking questions that promote interaction, interesting people in what you have to say, listening so that others will be encouraged to talk, avoiding rejection-producing behavior, handling criticism constructively, and more.

Everybody thinks that some people are born with the "gift of gab" and some people aren't. But the truth is there is no "gift of gab." People who are good at conversation just know a few simple skills that anyone can learn. This book will teach you those skills.

Chapter 12 uniquely summarizes the life's work of famed psychologist Dr. Albert Ellis on overcoming shyness and becoming more confident - and does it so well it received praise from Dr. Ellis himself!

Find out why Toastmaster Magazine calls Conversationally Speaking "the classic how-to book in social communication" and why Dr. Aaron Beck, whose work has had a major influence on thousands of psychologists, calls it "of great value for people who want to sharpen their skills in interpersonal relations."

What listeners say about Conversationally Speaking

Great and practical information that anyone can practice today. I started trying up the methods right away and saw an instant improvement in my ability to create and sustain a flowing, easygoing conversations with the people around me

Lives up to the hype

A very good guide of how to keep conversation flowing. The book is the ideal length for a self-help book, and is both an enjoyable read and listen.
In short, lives up to the hype.

Great insights, but more examples would be nice

Well thought out and insightful book.

It was a bit short though and I was hoping for more examples on how to implement the lessons and more techniques to have more engaging conversations.