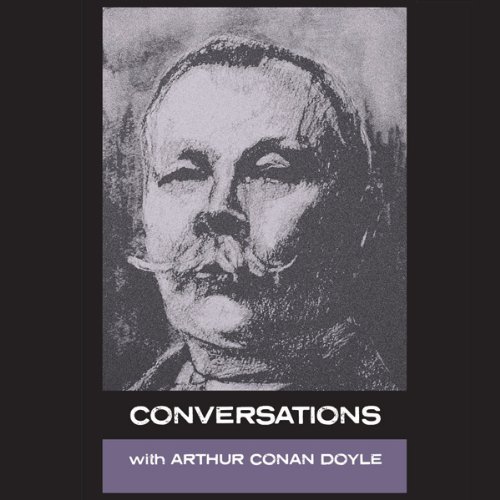 At the end of the 19th century, perhaps every man wanted to be Arthur Conan Doyle. He had written historical novels and short stories of horror and the supernatural; and he displayed huge energy and talent in a variety of fields. He was a fine cricketer (he once took the wicket of the great WC Grace); played football, rugby, and golf. He had trained and practiced as a doctor; campaigned for underdogs, like the falsely accused George Edalji; he liked fast cars and the new and dangerous invention of the aeroplane; he had the idea of a channel tunnel; introduced skis to Switzerland; and knew both Harry Houdini and Oscar Wilde. He was an adventurer, a controversialist, war reporter, and knight of the realm. But most famously of all, he had created Sherlock Holmes, the world’s most famous detective – based on his former medical professor, Joseph Bell. All in all, Doyle was a Boy’s Own dream.

Yet for Sir Arthur Conan Doyle, all such achievements paled into significance when set against his commitment to spiritualism. Although interested in the subject for many years, he publicly converted to the cause around time of the First World War - much to many people’s amazement. ‘Sir Arthur Conan Doyle has many striking characteristics,’ wrote Ruth Brandon. ‘He is gigantically tall and strong. He is a gifted story-teller. He is a man of strong opinions and considerable political influence. But perhaps the most extraordinary thing about him is the combination of all the attributes of worldly success with an almost child-like literalness and credulity of mind, manifested particularly in relation to spiritualism and its surrounding phenomena.’

What listeners say about Conversations with Arthur Conan Doyle

I always thought of Conan Doyle as a very down to earth, scientificaly sort of person. It was a big surprise for me to learn about all of his interest in paranormal phenomena. Who could imagine that Sherlock Holmes' creator was interested in fairies, Ouija boards and mediums. A very absorbing audio-book.

Sir Arthur Conan Doyle is an admirable man who had the courage to leave behind earthly fame to follow a brave path of a reality that only a few could see in his times. Looking what he has achieved, I am inclined to believe that Sherlock Holmes was just a tool that enabled him – because of the money and the fame it brought – to go beyond on a more important mission. As he says, he did not believe in the world beyond the grave, he did not even think there was a world beyond the grave. He just KNEW it. In this audio book, his eloquent ideas and believes are presented in a very "ear-catching" manner. Inspiring, inspirational and impeccable.