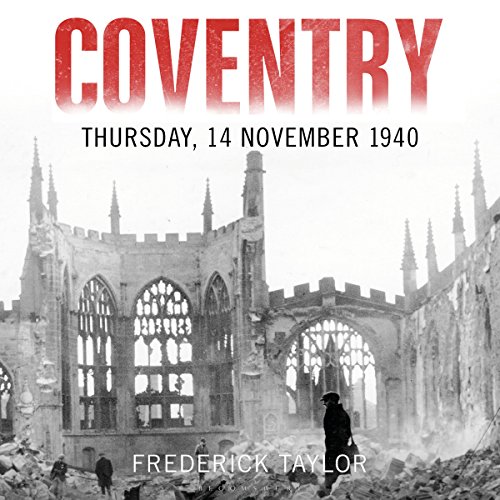 The German Luftwaffe's air raid on Coventry, England, on the night of November 14, 1940 represented a new kind of air warfare. Aimed primarily at obliterating all aspects of city life, it was systematic, thorough, unconnected to any immediate military goal, and indifferent to civilian casualties. In a single night, roughly two-thirds of the city's buildings were damaged or destroyed as the bombers laid waste to legitimate industrial targets and civilian structures alike. The old St. Michael's Cathedral, a 14th-century Gothic structure that burned to the ground that night, still stands in ruins today as a testament to the city's destruction during the raid.

Pragmatic British government propagandists would exploit Coventry's perceived status as a "historic town", playing down the city's industrial reputation. This would prove to be a powerful tool, and, as Frederick Taylor shows, was instrumental in tipping public opinion in the then-neutral United States away from isolationism and in favor of help for Britain.

But the bombing would also set a dangerous and destructive precedent as Allied air forces would study the Germans' methods in the attack and ultimately employ similar tactics in their equally ruthless and destructive attacks on German cities, eventually leading to the bombings of Hamburg in 1943 and Dresden in 1945 that killed hundreds of thousands, mostly civilians.

On the 75th anniversary of the Coventry bombing, acclaimed historian Frederick Taylor brilliantly details this momentous act and analyzes its impact on World War II and the moral quandaries it still engenders about the nature of warfare.

What listeners say about Coventry

Wonderfully written and researched book. Narrator very good but tries a little too hard with the accents when reading quotes; forcing a grating Birmingham accent for first hand accounts from Coventarians is tiring. That is however a minor fault - there is little to complain about, a great book.

Coventry being my home town, I look on what happened to the place in 1940 with fascination. Over the years, many stories have been written and television programs produced, but none tell of the story before or after the 14th November.. This brilliantly written and narrated book has shed more light on pretty much everything to do with Coventry from just before the war to several decades after it. Criticism and prise heaped in equal measure and where required. Each listen reveals something I missed the first time over.

Informative but a bit too long

So I got this book as I am from coventry and wanted to know more about the blitz. The book was very informative and I learned a lot about Coventry’s and it’s efforts in the war, it mentioned a lot of locations which I knew and lived around and was nice to know what was going on .

However the performance, the book just felt sooo long every sentence seemed to drag until eventually I played this at 1.75 speed and I could still keep up with this and understand which helped the book not drag at the end. The author has gone into great detail listing things sometime which no one would even care about however the narrator hasn’t gone to the same lengths as Coventrian accents where voiced in brummy/ Black Country accents, which is a massive misconception and should have been looked into before the performance.
The narrator felt a little bit to upper class and felt like I was being taught in school and not being told a story I found myself getting a bit bored with him.

If you want to know about the Coventry bombing buy this download. Great information on Coventry

Nice. Highlights shame on us not showing off great industry, great output of equipment to fight the Nazis and strong under adversity. After shaping the modern world in war and peace the city should be given special recognition.