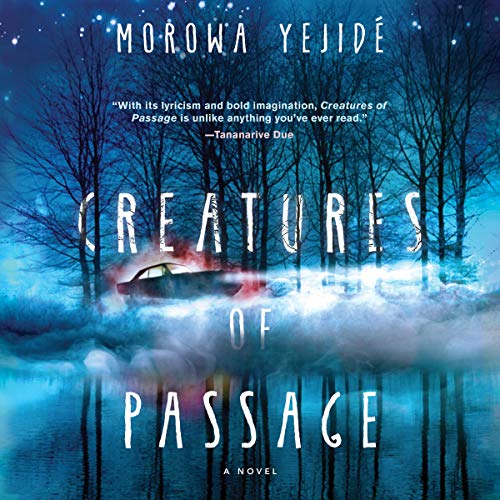 Longlisted for the 2022 Women's Prize for Fiction

With echoes of Toni Morrison's Beloved, Yejidé's novel explores a forgotten quadrant of Washington, DC, and the ghosts that haunt it.

"Yejidé's surreal new novel has no shortage of otherworldly surprises, but it's her this-worldly protagonist who steals the show...Informed by a richly woven mythology and propelled by themes of regret and revenge, Creatures of Passage has earned some apt comparisons to Toni Morrison's Beloved."
—Philadelphia Inquirer, One of the Best Books of Winter 2021

"Hauntingly magical, this sophomore novel by Morowa Yejidé centers a young woman dealing with the loss of her brother, her young great-nephew who mysteriously shows up at her door and Washington, DC, the city that provides an otherworldly backdrop to this imaginative thriller."
—Ms. Magazine, A Most Anticipated Book of 2021

"Skillfully blending fantasy and stark reality while blurring the line between the metaphoric and the tangible, Yejidé successfully tells the story in fits and starts as each major character adds a piece to the puzzle...Highly recommended."
—Library Journal, STARRED Review

"In this beautifully written and gloriously conceived novel, Morowa Yejidé reveals her mastery yet again. This book is both contemporary and ancient, frightening and stirring, playful and wise, an unforgettable blurring of reality and genres from its haunted Plymouth automobile to the mysteries in the fog in this alternate America and hidden Washington, DC. With its lyricism and bold imagination, Creatures of Passage is unlike anything you've ever read."
—Tananarive Due, author of Ghost Summer: Stories

Nephthys Kinwell is a taxi driver of sorts in Washington, DC, ferrying passengers in a 1967 Plymouth Belvedere with a ghost in the trunk. Endless rides and alcohol help her manage her grief over the death of her twin brother, Osiris, who was murdered and dumped in the Anacostia River.

Unknown to Nephthys when the novel opens in 1977, her estranged great-nephew, ten-year-old Dash, is finding himself drawn to the banks of that very same river. It is there that Dash—reeling from having witnessed an act of molestation at his school, but still questioning what and who he saw—has charmed conversations with a mysterious figure he calls the "River Man."

When Dash arrives unexpectedly at Nephthys's door bearing a cryptic note about his unusual conversations with the River Man, Nephthys must face what frightens her most.

Morowa Yejidé's deeply captivating novel shows us an unseen Washington filled with otherworldly landscapes, flawed super-humans, and reluctant ghosts, and brings together a community intent on saving one young boy in order to reclaim itself.

“In this ethereal novel, listeners experience the rare treat of a gifted writer narrating her own mesmerizing work. Yejidé's introspective, languorous pace is well suited to the otherworldly journeys of twins Osiris and Nephthys Kinwell - he from the other side of death's door and she barely on this side of it.” (AudioFile Magazine)

"A deeply layered novel of astonishing scope, suffused in the mythical, accented by the magical, but viscerally rooted in elemental human emotions. A deeply satisfying read." (Bloom)

What listeners say about Creatures of Passage

This was a fabulous book. The symbolism of the twins having a connection from birth and several separate stories that all lead back to several horrific acts of violence and the wandering spirits who could not rest until the wrongs were righted. Since this story occurred in the 60s it was not hard to see the racism, the power of the church, goof vs evil and the fear of the paranormal unknown. The author skillfully delivered this amazingly gifted family’s journey through tragedy and lives lived but tortured by current and last pt events. I would definitely read another book by this author who definitely has intimate knowledge of the “DMV” and it’s fiefdoms lol.

By rights, a new classic

A cross between Neil Gaiman and James Joyce. This is Black lives matter and true Q told by Gabrielle Garcia Marquez.
A near flawless, possibly flawless book.
Get it for the melodic weaving of fascinating characters, depth and story.
This is a book that will change you.

this audiobook was so goog - almost musical


this audiobook was so grea - almost musical

This is the one

If you read only one book this year, read this one. Infused with elements of mystical time, space and body fluidity reminiscent of The Water Dancer, this book stays with you for days and is transformative. Read by the author on Audible, a stunning performance. I lack adequate words to recommend. I’ve never read such apt descriptions of events both sublime and terrible; never graphic depictions of awfulness, rather you are transported into the minds and the moments of the protagonists. There aren’t enough stars to assign this phenomenal book. What an author!

Mystical and gritty, spotless narration. Just finished the book, and am going to listen again soon.

She writes in a beautiful and enthralling way. I really don’t think I’ve ever read a book quite like this one.

The author’s descriptions flow with details that paint lifelike images that wind through this dark retelling of truths unspoken.

Thanks for an insightful read on pertinent issues. Book club & I love it! ❤

From the blurb, I probably didn’t think this would be “my kind of book”. But from the language selection, to the characterisation, to the increíble takes, woven together, this is a wonderful one-off of a read that I fully recommend. On my radar due to a Women’s Prize nomination. Hoping it makes it to the shortlist on the 27th!

A grown up ghost story

This is a novel about how we live and how we die. The sort of mark we want to leave behind when we leave this relm of existence.

Very poetically written and a beautifully performed audio book by the author. it is,also a book abort how badly adults can treat children at times and those on the fringes of society you may walk past on the street and discuss. Love thy neighbour we all need safe passage.