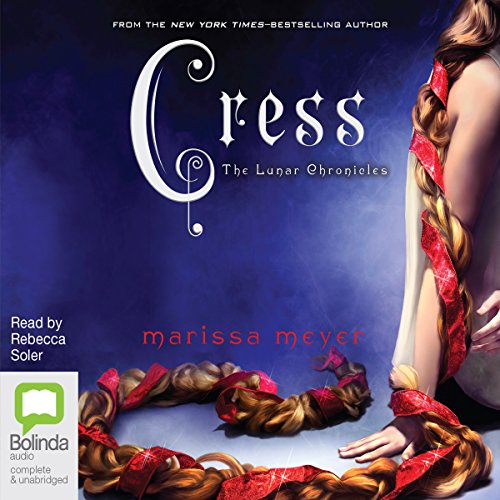 The third instalment in the best-selling Lunar Chronicles series, following Cinder and Scarlet.

Incarcerated in a satellite, an expert hacker and out to save the world - Cress isn't your usual damsel in distress.

Cress grew up as a prisoner. With only netscreens for company, she's forced to do the bidding of the evil Queen Levana. Now that means tracking down Cinder and her handsome accomplice, Emperor Kai. But little does Levana know that those she seeks, and the man she loves, are plotting her downfall....

As paths cross and the price of freedom rises, happily ever after has never seemed further away for Cress, Scarlet and Cinder. This is not the fairy tale you remember. But it's one you won't forget.

"Once again, Meyer offers up a science fiction fantasy page-turner that salutes women's intelligence and empowerment." ( Booklist)
"The momentum Meyer built in the first two books continues to accelerate as the stakes grow higher for Cinder and her friends. The next instalment cannot come fast enough." ( Publishers Weekly)

What listeners say about Cress

Story gets pretty annoying to get through

Everything is revealed beforehand and so most of the important scenes are just reactions of a character to stuff that we already know about so we can't relate to the shock or thrill of the character. Narration was decent.

I'm enjoying these books as they have twisted the original stories that we read as children and brought them into a fantasy future world.
Cant wait for the next installment!

It's all coming together.

I absolutely loved this one. The humour is by far the best and Captain Thorne is definitely a favourite! I don't think I'd enjoy this half as much of it weren't for the reader, Rebecca Soler. What an absolute fantastic story teller.

LOVE this series!! So original, great characters and just brilliant ✨ Really nicely read by the narrator too

This is the third book in the Lunar Chronicles. Cress was first introduced in book one when she warns Cinder of Levana's plan for Emperor Kai but this book is her story.

Cress has been imprisoned on a satellite for most of her life. Our reimagined Rapunzel is a little different to our previous main characters Cinder and Scarlet. Cress is a bit more vulnerable in the beginning. Cress' life has been extremely sheltered due to her imprisonment. Cress quickly learns what real life is like. Cress goes on a huge journey in this book and I couldn't be prouder of her.

As well as this being Cress' book this is also Thorne's book. Through Cress, we learn a lot about Thorne, his past, his motivations. I have to say I did fall a little bit in love with Thorne in this book.

Like in Scarlet we have multiple POV in this story. This keeps us up to date with all the characters. Multiple POVs are one of my favourite things so I was obviously excited about this.

I loved the characters in this book and ultimately I loved the book but it did seem to take me an age to finish. There were a few points in the middle where it dipped but the end more than makes up for it. Once I finished I had to start Winter!

Loved cress and will definately will be relistening to this audiobook. The narrator is perfectly matched and provides a distinct voice to each character. Come on audible get Winter already

I loved the whole series, but I think Cress has been my favourite. I love her character! It’s been narrated really well and the story was so gripping and different to anything I’ve read before! Would definitely recommend to fans of YA fantasy and sci and fairy tale re tellings.

It was great to finally jump back into The Lunar Chronicles after reading both Cinder and Scarlet back in 2016. This was a great continuation. Loved how the story of Repunzel was weaved into the series so far. This flew by as there was so much action, so many twists and turns and a few revelations that made me feel so many emotions. I can't wait to see how this series concludes.

This is the first book in the series that I have listened to and I loved the narration and how well each individual voice was performed.

It’s a good twist on the classic stories.
I love Cress she’s so cute but also becomes a strong character.
Slightly predictable and very PG but it’s a good listen.

Great 3rd book in the series!

Cress, the 3rd book in the Lunar Chronicles held another strong narrative. Meyer wove the stories together perfectly and ended with yet another cliff hanger! Great read. I'm loving the characters!

amazing. absolutely loved Cress. even better listening the second time. Luna Chronicles maybe my fav series in the last 5 years.. marissa meyer i salute you. and big shout out the engaging incomparable narrator. what a series!

still really loving this story.
much better on the reading this time around
highly recommend

Rebecca Soler is a queen

The story itself is wonderful of course, but Rebecca See brings it to life in a way I’ve never experienced with an audiobook. Ever character has such a distinct voice that you know exactly who is talking without any context, and can tell exactly what they’re feeling!

At times it was a bit frustrating but in a good way... when everything kinda worked out (did it?), it was amazing. Loved listening. Recommend. Can't wait for the next.