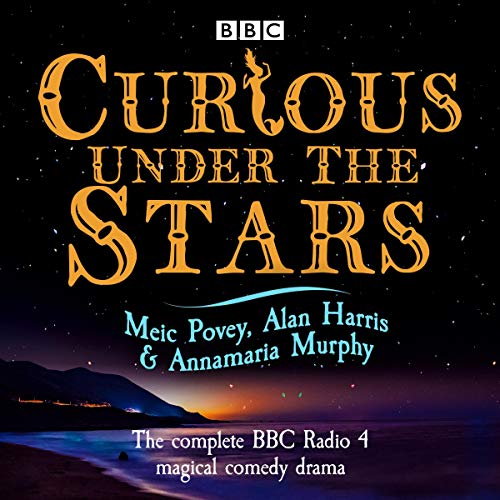 Curious Under the Stars

All 11 series of the mystical drama set in the wild Welsh coastal village of Glan Don.

When Gareth finds his wife, Diane, in bed with another man, the couple attempt to save their marriage by uprooting from London to the West Wales village where Gareth grew up and buying the local pub. It's a bit of a dive - the wallpaper's peeling, there are squirrels in the saloon bar and something's growing out of the pool table. But it's got potential and they're determined to make a go of it.

Soon, the locals are flocking to The Druid's Rest - and as Diane discovers, her husband's old friends are an eccentric bunch. There's ex-soldier Gwyn, who carries a machine gun everywhere; garrulous waitress Megan; cook Matty, whose dishes cast a spell over everyone who eats them and enigmatic Potman (and narrator) Emlyn, who seems built into the fabric of Glan Don. And then there's Bethan - beautiful, bewitching Bethan, Gareth's teenage sweetheart, who may still have a hold on his heart....

If the villagers are strange, Glan Don itself is even stranger. Steeped in ancient folklore, it is both eerie and enchanting. The sea is an all-pervading presence, magical and menacing in turn, home to mermaids and submerged forests. On land are haunted caves, dark woods, ruined castles, old lead mines - and legendary beings including ghosts, dragons, witches and the King under the Hill.

As Gareth and Diane struggle to cope with the dual challenges of running a pub and dealing with the supernatural, will Glan Don bring them closer together - or tear them apart?

Music: "Knee-Deep in the North Sea" by Portico Quartet.

What listeners say about Curious Under the Stars

I only wish it had lasted longer. It was a simply enchanting series… fantastic characters and the performance was fantastic

ok but not great

loved the fantasy part hated the marriage fights and stupid drama between human characters. if drama doesn't bother you you'll enjoy this book.

An extremely good story for cosy fireside reading in a little cottage in the woods...

Wonderful imagination.. stretched folklore...and a thoroughly good listen! I loved this story such a lot. I hope I can find more by the author. Also an excellent production. Very well put together and very well acted. Lovers of Wales this is for you.. and me and in fact anybody! All ages! Loved it. My only complaint is... I wish it were so much longer as I didn’t want it to end!

loved every single second,made me laugh made me cry.Loved all the characters and episodes.highly recommend

The early series are brilliant

Sadly, this continued for too many series and became mired in the deteriorating relationship between Gareth and Diane, hence the 4 stars. However, the early series are magical and remain some of my favourite radio productions ever. The change of lead actor for the penultimate series was jarring (no fault of the performer). There are also a couple of continuity errors, which are irritating but potentially explained by the series conclusion.

I've loved this series from the very beginning on Radio 4. To have the complete series to hand whenever i want to listen is a treasure. Whether you listen from the start or dip in to hear the different stories it's an easy listen. The tales are rich, full of Welsh lore and the actors make the characters so believable you can't help but love them all. If you are interested in folklore of our fair isle, real or created, this is a definite and I recommend it to everyone. Happy listening.

What a lovely listening experience. I spent hours listening to those glorious Welsh accents. Makes me appreciate my heritage. But it’s more than that, it’s the mix between the magical and reality of Glan Don. A touch of faerie.

Disappearing into this series has been an absolute pleasure, really recommend listening, the narration is beautifully done, with a soft calm Welsh accent.

I laughed, I cried, I learnt some Welsh mythology. Absolutely loved this, it's wonderful.

Mystical folklore meets coastal village with colourful funny characters.
Ioved how the creatures were entwined into the dialogue and stories. Funny drama that is full of far out twists and surprises so keeps you guessing. I really enjoyed it.

Take me to Glan Don!

One of the best dramas I’ve ever listened to!!

An excellent series with a twist.

I first heard Curious under the stars on Radio4 extra. I love the gentle pace it runs at as the storyteller, Emlyn a fount of local mythology, leads us from event to event.
A plethora of characters litter the scenes within.

If you've not heard work by Miec Povey before then you can't go wrong starting here.