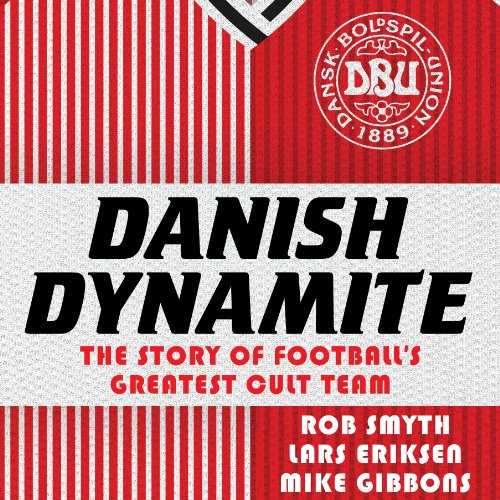 The Denmark side of the 1980s was one of the last truly iconic international football teams. Although they did not win a trophy, they claimed something much more important and enduring: glory, and in industrial quantities. They were a bewitching fusion of futuristic attacking football, effortless Scandinavian cool, and laid-back living. They played like angels and lived like you and I, and they were everyone’s second team in the mid-1980s. The story of Danish Dynamite, as the team became known, is the story of a team of rock stars in a polyester Hummel kit.

Heralding from a country with no real football history to speak of and a population of five million, this humble and likeable team was unique. Everymen off the field and superheroes on it, they were totally of their time, and their approach to the game was in complete contrast to the gaudy excess and charmless arrogance of today’s football stars. That they ultimately imploded in spectacular style, with a shocking 5-1 defeat to Spain in the 1986 World Cup in a game that almost everyone expected them to win, only adds to their legend.

For the first time in Emglish, Danish Dynamite tells the story of perhaps the coolest team in football history, a team that had it all and blew it in spectacular style after a live-fast-die-young World Cup campaign. Featuring interviews with the players themselves, including Michael Laudrup, Preben Elkjr, and Jesper Olsen, as well as with those who played or managed against them, this is a joyous celebration of one of the most life-affirming teams the world has ever seen.

What listeners say about Danish Dynamite

Not quite 'dynamite', but high octane nonetheless

The Danish team of 86' were the antidote to kind of tactics often employed by the so-called 'minnows' of world football as exemplified in the most recent edition of the tournament which saw even 'middle-weights' of world football like Colombia and and Sweden play a brand of football that belied the showcase of football's 'Greatest Show on Earth'.

Being born in 1982, I missed the 1986 edition of the FIFA World Cup, but have vivid and fond memories of EURO 92 when Denmark shook European football to its core. This book took me through the highs and lows of how that hastily put together squad 'piggybacked' on the shoulders of a dynamic team of 'giants'. The warm and cosy (or maybe 'hygge') narration of the story made this book pleasantly listenable even if the pronunciation of some of the non-Danish players was a little off (Marco van 'Besten' springs to mind)

Much like the team of 92, while his book lacked the flair of some of its counterparts, but ultimately delivered a winning result. It made me nostalgic for a series of events of which I have no memory!

Tip: If you can ignore the late Soviet era production quality and Russian commentary, YouTube has 3 minute highlights of all the games mentioned and are an excellent accompaniment to an enjoyable listen.