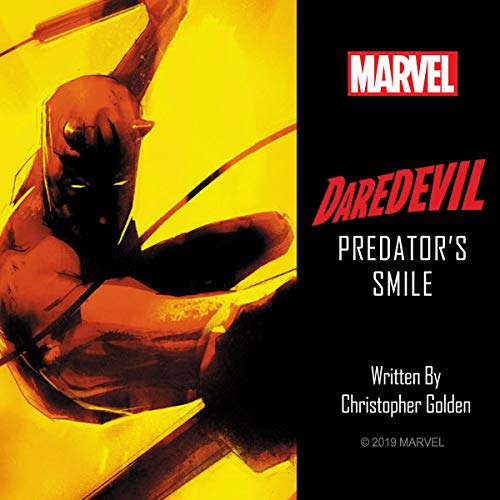 An arsonist's twisted handiwork claims hundreds of lives in the roughest neighborhood in New York - Daredevil's turf. Daredevil digs up the root of the problem and comes up with a ruthless crime boss bent on brutally wrestling control of New York's underworld from the corrupt clutches of the Kingpin of Crime. The new crime boss' enforcer? The bloodthirsty Bullseye, master assassin with a pathological enmity for Daredevil. Bullseye takes to his work with deadly efficiency, killing his way toward the Man Without Fear. Daredevil is forced to ask for help from the Kingpin - his deadliest foe - before Bullseye's fatal obsession and an explosive gang war destroy the city he's sworn to protect.

Went through this book quickly because I couldn't pulll myself out of the truck even whenever I reached my destination because it pulled me in.

Predator's Smile is an okay (even if a little padded) outing for The Man Without Fear. The book's biggest drawback though is how underdeveloped the main villain is and how much of a non-threat he is to The Kingpin's empire.

Dion Graham's performance is very good and his voicework is great for the most part, since he does falter a bit when it comes to doing accents and female voices.