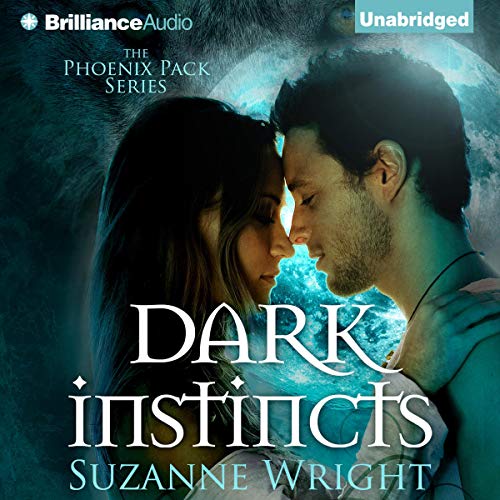 It happens whenever wolf shifter Roni Axton is near Marcus Fuller: a crackle of sexual awareness that's intoxicating...and deeply annoying. Marcus is a pack enforcer who oozes power, but Roni is lethal in her own right - nothing like the flirty females who flock around him. Even still, his possessive gaze makes one thing clear. Marcus has singled her out for seduction, and he wants to make her sit up and beg.

No matter how aloof and unfazed Roni acts, Marcus can tell she wants him. When a brutal attack by a jackal pack forces them to work together, it's the perfect opportunity for Marcus to chip away at her defenses - until he falls into his own trap, completely unprepared for the intensity of their connection. Roni is the only one who's ever seen past his shifter charm and discovered the man hiding beneath it. And for Marcus, claiming Roni once will mean needing her forever.

What listeners say about Dark Instincts

The Best One in The Series!

So far, this is my favorite story in the series.

I like these stories because there is a plot and action but they have a lot of steamy romance. However, the other books in the series seemed to have more bad language during these scenes and the male characters had to be dominate. In this story, it was more balanced which has made this my favorite book in the series.

Loved it! Now I just have to wait for the next book!

Another hot book by Suzanne Wright. The pages were steaming with this book. So if you are a fan of the series pick it up. I still love the first book best, with the third my least favorite. I wish there was a little more action, but for a romance it is great. I love the characters in this book and can't wait for the next couple to have their book, I'm hoping it's Ryan's book. Since it has been awhile since I read the other books and I did need a bit to remember all the characters, but the one I forgot most was Roni (Nick's Sister from book 3) although it came back quickly. I got this book/audio for $5.98 total using the Whispersync feature. Narrator does an awesome job.

The wolf pack versus the jackels....

Two packs, lots of characters, hard to keep up. This listen was ok for me, the storyline was a bit different but the mating continues, this time it is Marcus and Rony. Jill Redfield does an amazing job trying to keep all the characters recognizable but it is becoming difficult to keep up with everyone. Sale buy only!

This is a great series and the narrator is great!
These books are a real treat and well done! This book is as good as the other three and has a great story, well worth a credit,

prefer the first ones

This one was not bad but I preferred the first ones much more. I love how they are always cracking jokes and this one was just not as funny. The characters in this one lost some of the spunk that I enjoyed.

With all the good reviews I was hoping for something interesting. I have been struggling to find anything of value to listen to on Audible, and this was not it. The characters were abrasive and unlikable and the story line was flat. Couldn't finish

This series is becoming depraved. Last book had shifters hunted and brutally killed. This one is much worse.
And Marcus who was diddling Trick in the first book is suddenly the romantic hero? Yah right.

I like the series but feel as though the first book (Taryn & Trey's story) was the best. Nick & Shaya's was just ok and Roni & Marcus had such potential but it was fell flat. I am taking a break from the series for a bit.

The narrator was great as always, I highly recommend her to Branch out to other authors because she has a gift. It seems as I buy these books from the series the storyline is the same. I have to say this is the last book from the series will read or say listen too.

Another Good Book about the Phoenix Pack

Where does Dark Instincts rank among all the audiobooks you’ve listened to so far?

In the Phoenix series I would say it is one of the better ones - as for series as a whole I think book one is the best.

We first met Roni Axton in book three. Book four goes into detail following how Roni builds a permanent relationship with a member of the Phoenix pack. This book contains a fair amount of graphic sex. If I were to make a negative comment it would be an error made by Suzanne Wright. She changed the personality of Kathy who was a love person in book three and appears to be a harridan in this book. I am not sure I will buy the next one in the series as I feel they are becoming formulaic.

another great book in the series.

I love listening to the Phoenix pack and mercury pack series. so far have read all but the latest of each series but i think this one had a lot more humour in it what with the odd facts and practical jokes played but one of the characters. although all the books are equally good

I just love reading this series. I feel like I am part of the pack. I feel anger when they do and happiness too. Next book, here I come!!

one of my favourites!

I absolutely love this series. well written and very well read. I couldn't stop listening. I need more of Greta's wit!
can't wait to read the next one.

I love all the books so far in this series. they are well written and well performed. anyone that loves shifters, their lives. their loves and their battles, this series is a must read.

Another excellent story, love these strong females, perfect narration again, now for the next one

Good story? Check. Romance? Check. Humour? Check. Do I highly recommend it? Check 😁😁😁
Well worth the credit and my favourite in the series.

Favourite one so far!

A little different from the first 3 but well worth a listen! Ronnie and Marcus rule!

Clear audio sound, great storyline, just what I would have expected from Author Suzanne Wright

loved this one ronnie she was gutsy

as always the humor is great and Jill delivers greatly. loved that we are getting different shifters intergrating

An explosive story of a playboy and a tomboy, it's fast paced, an absolute thrill ride from beginning to end. Suzanne your characters are fictional but you tackles realistic issues, from sexual assault to trauma and i applaud you for that. Jill thank you for another amazing narrative. xox

This was my first experience with audible and will be using the app again.
The story line was fantastic, bery engaging.

I felt is was well presented and all characters portrayed to a high level.

i loved it. all of Suzanne Wrights books i have loved. i cant wait for the next