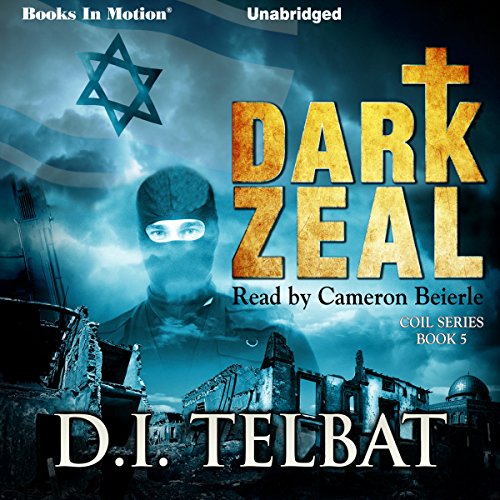 In Dark Zeal, the fifth book in the COIL series, D. I. Telbat takes us into the heart and heat of Gaza, Israel. Agent Corban Dowler infiltrates Gaza City for a routine medical op but soon discovers an international plot by Hamas terrorists to destroy Israel, forcing him to respond as a soldier of Christ.

Wounded and captured, Corban gathers his wits to attempt winning over greedy arms dealer Titus Caspertein in order to save Israel from destruction. Corban's mission is further complicated when UN humanitarian American Annette Sheffield is kidnapped, and he defies government orders to stage a rescue.

Meanwhile, Luigi Putelli, ex-assassin and family guardian, searches for his friend in the war-torn city to offer his services once again. With Hamas militants closing in and the Israeli air force targeting extremists, Corban calls in other operatives to help complete his mission and prays they aren't all mistaken for terrorists.

Bullets and missiles fly all throughout this book. You'll experience tunnels, drones, and the horrors of the Gaza war zone. But where darkness seems to thrive, God has placed his eternal light in the heart of faithful servant and bold spokesman Corban Dowler. Join us for this continued saga and learn again that there is no redemption without sacrifice.

What listeners say about Dark Zeal

Best ever! No compromise!!!

I enjoy Christian fiction. This author writes books so well and grabs my attention that I don't even know how to put it into words. The author states clearly and without compromise the Gospel message and the truth of the persecuted church! Packed with suspense, action, and a little of everything.... kept me wanting more! I'm saddened to realize book four was not avail in Audible. I hope Books in Motion, Audible and the author (the narrator too) can collaborate and provide the Coil Legacy series!!!!!! Several years ago I started listening to books while I work ( I am an artist). It is part of my creative process.... many pieces were made during this series and as I look upon them I am reminded of parts of these books..., mostly reminded of the gospel truth was shared unadulterated!!!! Keep up good work and we will continue to support the persecuted brothers and sisters through the world... also keeping in mind that the American believers are starting to experience the persecution here in this post Christian society......