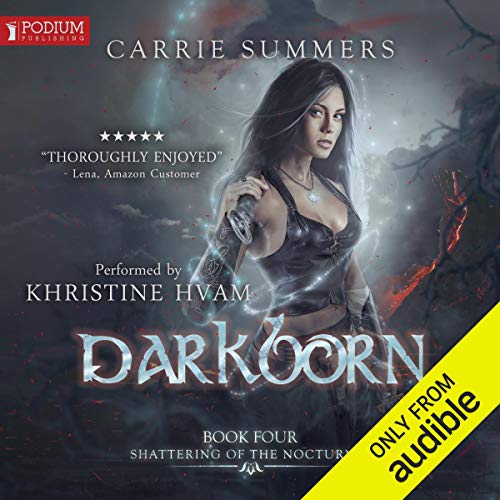 Lilik is on the warpath. Behind her, House Ulstat is a smoking pit. Ahead, Mieshk Ulstat wields terrible magic from within an impregnable fortress. The battle approaches.

Never mind that Lilik's fighters are actually a ragtag assortment of smugglers and thieves. Forget that something is terribly wrong with the aether, leaving Lilik's magic unpredictable. Lilik is the last hope for stopping Mieshk's cataclysm.

What listeners say about Darkborn

Khristine Hvam is one of my favorite female narrators. She has such range, female and male characters alike. The trilogy kept my interest more by her narration than the story line. However, the books were fun and I enjoy this author. I hope to hear more from both soon. -AM

Fantastic and read it because of the narrator. It sounds like another book could be made. Would definitely buy it!!!! You need to have the same person partner with you on it and all your books.

I wanted to kill both channelists myself

Finished the story after struggling through the childish stuff. if I ever read some harlequin fantasy romance novel again, I hope someone just gives me pillow therapy.

Good book, with some annoyances

Okay, if you've made it this far you know what's going on in the story. Most of the series is very good. In my opinion not worth a re-listen, but still worth a listen and purchase. There are some really cool original concepts in the series, and this book is no exception. So what's my complaint? The main protagonist, and to a lesser degree her counterpart. She is faced with tremendous challenges, but at every turn, the people that love and support her are ignored for their advice. Consistently she gets wrapped up in doubt and anger and charges ahead, often times alone, and makes things worse. Yeah, I can understand it early on, she's coming to terms with... all of it, but still, there are a ton of people around her, even when she's alone, that are there guiding her and supporting her. The phrase that comes to mind is "You need to get out of your own way." Now if this were an occasional behavior it wouldn't have bothered me, she's facing an immense challenge, as well as the burden of leadership on very young shoulders. However it really got to me. To the point I wanted to yell at her. As to her counterpart... All I've got to say is when the world is coming to an end, and you *know* you're part of the solution, don't curl up in a ball and hide from the reality of the situation WHILE the feces is hitting the fan. Perhaps this is my former military training, but two very apropos sayings come to mind, "Do something, even if it's wrong." and "If you're going through hell, keep going." Of *all* the things he could have done to sabotage things, inaction is by far the most harmful. Yes, I know, going through a lot, young, overwhelmed, etc. It still annoyed me. Now these annoyances aside, these characteristics in the two of them serve a very important purpose to the story line. So to some degree I'm willing to ignore them, but any time I want to yell at not one, but two of the main characters, I'm going to bump the story down a star. On principle. Khristine Hvam is an excellent narrator, but I found occasions where it was difficult to tell which character she was speaking for. Not often because the context provides many of the hooks necessary, but some of the voices were just too close to one another. She's no Wil Wheaton when it comes to narration, he's pretty hard to beat in my opinion, but I think she's almost on par with the narration quality of Nick Podehl.