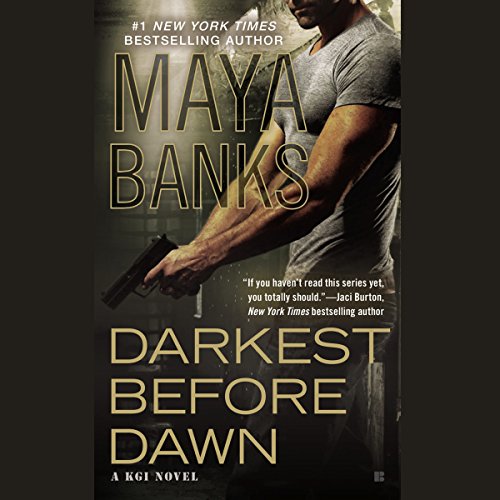 The enigmatic Hancock has been both opponent and ally to the KGI teams for as long as they've known him. Always working a deep game, Hancock's true allegiance has never been apparent, but one thing is for certain - he never lets anything get in the way of duty.

But now, his absolute belief in the primacy of his ultimate goal is challenged by a captive he's been ordered to guard, no matter how much she suffers in her prison. She's the only woman who's ever managed to penetrate the rigid walls surrounding his icy heart, but will he allow his perplexing feelings for the beautiful victim to destroy a mission he's spent years working to complete or will he be forced to sacrifice her for “the greater good”.

What listeners say about Darkest Before Dawn

JUST AS SPECTACULAR AS THE REST OF THE KGI SERIES

WOW. Long awaited; almost 16 months since the last KGI book. Of all MB's books/series, the KGI are my favorite and this one did not disappoint, more than that, it was the best in a long time. I loved this book. I loved the drama, suspense, sex (what little there was of it), romance (that too was sparse, but when it was portrayed, it was heart-wrenching). I loved the strong heroine and, of course, as all MA's books, tough alpha males. But the thing that drew me into this book was a storyline that was multifaceted and kept me on my toes. I dislike figuring out the "who done it" or what's going to happen next. I want to be surprised, intrigued and baffled, only to have something revealed that I didn't ever suspect….this was it.

I admired the heroine as did everyone in the story; I felt her fear, her anguish, her sympathy and empathy and her suffering. This is what I expect from a good storyline, and again, this had it all.

As For Mr. Branson's performance, well, it was spectacular as well. The many male voices and especially accents were differentiated and distinct; his female voices were done well also and he glided from one persons voice to the next seamlessly.

All in all, this was a great listen. I would recommend it to anyone who loves the romance or mystery genres. Now, MA, lets not have to wait almost a year and a half to hear what's happening next. There is Joe Kelley left to be brought to his knees by a woman; what about Resnick or the rest of the disbanded & reassembled Titan Group?

The characters were fairly one-dimensional, and there wasn't as much of a story as I had expected. Although there was a lot of angst, it didn't do much to move the story along. The ending was especially contrived. Although I have read and enjoyed other books in this series, it may be time to retire the KGI series. This seemed to be an independent story that was shoved under the KGI umbrella in the last few chapters, and in my opinion, the author didn't pull it off.

I'm having a hard time trying to think of how to describe how I felt about this book. The story was VERY dark. I think it was also pretty unrealistic. Even knowing it would turn out with a happy ending, a lot of it was hard to read. There was very little romance. It was more like Stockholm syndrome. The only real romance was during the epilogue. Thankfully, most of MB's books are much better than this one.

this is the 1st KGI book I have read in a couple of years .Maya Banks was my favorite author at one time but no longer. I had a very hard time reading this book it was so very depressing with people's death that goes on an on . I understand this is real life the vile things people do to others is in my life but I read to escape the horrible thing I have been exposed to in working ER. I never like giving a bad review but I wish the summary had been more detailing in what Honor went through less about Hancock. But on the other hand it was a very well written book suspenseful just not something you want for a light Sunday afternoon reading.

What happened to Maya?

I don't really leave reviews, but this one really made me...mad. Confused, maybe? This edition of the KGI series just doesn't seem to fit in. It feels like it was written by an entirely different person. I certainly don't want to spoil it for people, but the plot just dragged on an on... or should I say 'drugged' on and on? The premise for the story has some teeth, and I can see it as a KGI novel... but this isn't it. I don't believe that Maya wrote this book. If she did, it feels like a haphazard project that she put out because she had a deadline and was under pressure to put out another KGI book... but her heart just wasn't in it. If I had to hear 'for the greater good' one more time I might have screamed. Actually, I may have screamed. I rarely yell back at an audio book, but this one had me saying, 'Are you kidding me?' multiple times.

I like the rest of the KGI books but this is so dark. So very unhappy.

I liked the book there were some moments when the internal monolog board me a lot I kept thinking go on with the story!!!!! But overall it was a good book

I enjoyed this KGI story.

I was really surprised about how much I love the book I've always loved the Kellys and not so much Hancock so it took me by real surprise when the story was really something to get into and not want to put it down.

What an Experience Darkest Before Dawn

Hancock's story felt like an experience for many reasons. He's a man with all the right ingredients to be a hero. However, he is so much more than that by the end of this book. What I like the most is that he was not too alpha to ask for help when needed. Honor, is a fire cracker who is well matched for a man like Hancock. Her ability to adopt to a challenging environment in order to survive was inspiring. She didn't crumble in a corner crying while waiting for someone to rescue her. She took charge of her out come while experiencing some horrific things but remained strong. It was quite an emotional read at time and didn't disappoint as the latest addition to the KGI series.

This is very different to the rest of the series in that KGI only appear in the last 1/3 of the book. But there is info on the current state of things within KGI family if that is what you want. This is a departure in that this is all about Hancock and Titan with the death of a titan member. It is very dark in tone so not an easy read at times with all the torture and mind games that is part of the story, but having said that it sets up things for the end. so overall a dark and painful read but well worth it

Conrad was a fav character. He kind of kept Hancock from imploding a few times and was Honor's safe harbour and in the end he saved the day in his own way.

What aspect of Tad Branson’s performance might you have changed?

he cant do female voices!!! he had little change between the male voices so hard to follow at times.

One gripe: when KGI go enmasse to see Honor confront Hancock, you get the build up with them all in the house and she goes upstairs to confront him and you expect there to be something when she comes back down and KGI ripping into Hancock and teasing him but there is NOTHING!!! That is the biggest let down ever!!!

Don’t bother with this KGI novel

Truly terrible. I had the feeling the author had to fill in words and am sure copy and paste was used again and again. I’m starting to think Maya Banks is a male, the misogyny is embedded in the language, the ridiculous sex scenes and the plot.