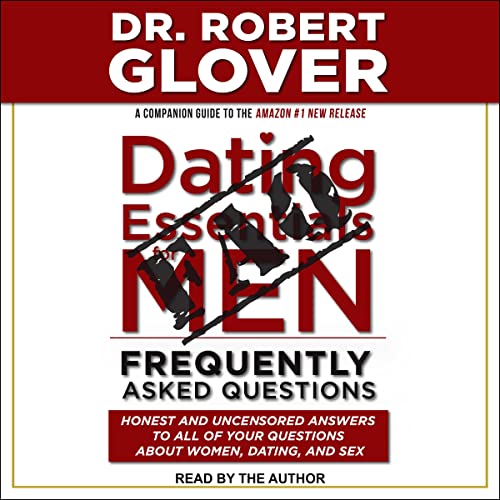 If you struggle with dating, welcome to the club. Dating is not in our human DNA and ninety-eight percent of all men struggle with its most basic aspects. This struggle is often fueled by the fear of: Doing something wrong; Looking foolish; Getting rejected; Becoming a #MeToo casualty; Getting into a crappy relationship with no escape.

These fears typically manifest in playing it safe and doing nothing at all, or at best, in clumsy, ineffective attempts at approach. The all-too-common outcome of repeated failure leaves many men feeling frustrated, defective, unlovable-even resentful.

For most of his life, Dr. Glover, the author of the groundbreaking No More Mr. Nice Guy, was what he calls a "bad dater."

But this all changed when he got divorced in his mid-forties. Dr. Glover decided to approach dating as if it were a scientific experiment. To his surprise, he quickly found that talking with women, getting numbers, and getting laid was nowhere as difficult as he had thought.

Dating Essentials for Men was born of this experiment. Dr. Glover has since taught thousands of men how to interact confidently with women and find the love and sex they have been seeking.

It works if you work on it

Really happy to see FAQ version of DEFM book. These are some practical advice from Dr. Glover and it works if you work on it. The most important thing about it is it's not typical pick up book but it's more than that and advices you to be an honest and integrated person.

Dr. Glover is a genius

I am a fan of everything and anything that Dr. Glover puts out. He is a true master of his craft. This is just another example of his genius. I loved this book!

Although its titled dating essentials, the content applies to all aspects of your life and relationships. I am married and am always interested in learning different ways to improve our relationship and keep things fresh, staying engaged and playful is a great way to maintain a strong relationship. This is the 3rd book I have purchased from Dr. Glover, his guidance and advice can be life changing if you are willing to put in he work.

Dr. Glover is the MAN

You’ve done it again Sir Glover. Your name will go down in history. Bravo. Another classic. Just listen to this audiobook men. It will change your life alongside NMMG. Thank you Dr. Glover, you’ve made the world a better place.

Valuable advice & wisdom for all men

Very happy to have a new book from Dr. Glover. Having already read his previous work, Dating Essentials for Men, I found this to be an excellent compliment. I think his advice is both expertly explained and practical, with benefits beyond romantic relationships. he is able to dissect questions from men to reveal the the flaw in their thinking and with his years of experience provide examples of other men have faced the same problem in the past. Also, I appreciated how open and candid he is with his own personal experience. The question and answer format is great as it reminds the reader that they are not alone, other men are facing the same challenges. Overall, I highly recommend that men read this book as it will help them not only in their romantic relationships, but relationships in general.

It will change the way you engage with the world

When I listen to or read Dr. Glover's books I always unpack something new and learn more about myself. The insights and advice ring true because it's grounded in observations about human nature and not just some method to hook up with women. This content is essential for any man who is uncomfortable in his own skin when it comes to interacting with others. It goes way beyond just getting dates with women. It teaches you how to become a more integrated, social being that can enjoy the abundance the world has to offer. This is the perfect companion to No More Mr. Nice Guy and Dating Essentials for Men. It will help you walk the planet with more integrity and confidence. Listen to it and then listen again.

This book by Dr Glover is a must for every man. The information and tips in this book will help you at any stage your in whether it’s Dating or a serious relationship with a woman. I highly recommend it.

Get this book and "level up" your love life!

Dr. Glover's follow-on work to Dating Essentials for Men is great as a stand-alone book or along with his other books (No More Mr. Nice Guy and Dating Essentials for Men). This book of Frequently Asked Questions (FAQ) provides more answers of over 97 topics! It's full of insights, great mindsets, and lots of advice to become more confident in yourself, your decisions, and leading in life and love.
As a recent Divorcé after 22 years of marriage, Dr. Glover's work has helped me to thrive and flourish in this newly "single again" phase of my life.
The audiobook reading by Dr. Glover is well-done, He gives a lively performance with superb vocal variety, conveying sincerity and authenticity. If you're dating or in a relationship, make the investment in yourself and your happiness and get this book!

Excellent information and well told by the author. Felt as if I was in a group meeting.

Another output by Dr. Glover that is full of valuable information. An excellent companion to Dating Essentials For Men and his Positive Emotional Tension course. If you really want to take your life to the next level pay close attention to Dr. Glover and what he is sharing.

I am a Big fan of Dr G great follow on from
No more mr nice guy!!

A must for all men

Dr. Glover's work helped me to understand myself better, to know why I am a nice guy and to make the first steps towards recovery. I would definitely recommend DEFM and DEFM:FAQ for all men who aren't happy with their lives and struggle in their relationships with women. I have started following the information given in DEFM and DEFM:FAQ and slowly but steadily I am getting results which I never thought would be possible. As Dr. Glover said many times: it works if you work it.

great book with some great advice ! well read too. would recommend if you like no more Mr nice guy

I'll be honest I've only gone through a few chapters very quickly, however from watching good videos of him on YouTube and also having the dating for advice book (previous book) plus having no more Mr nice guy (both audiobooks), this one should be good.. I'm still working my way through those books and I find the advice is that good that I want to just stop, listen and not miss anything to take it all in.

checkout the sample and go from there.. he has a no bs approach to things, where a lot can waffle etc

What Can I Say

Another down-to-earth, realistic, and extremely helpful book in an interesting Q &A format covering all aspects of dating where you can easily listen/read from start to finish or go to the chapters you think you need! You don't need to have read his previous work as there are gems galore in this work but I believe you will want to after completing this. I will be buying a physical copy for my sons over the next couple of years as I truly believe that if I had this in my early years I would have been a better partner and reversely not put up with so much S%$^.

On a final note, check out Dr. Glover's pivotal work(in my opinion) No More Mr Nice Guy, even more of an eye-opener, I don't know how many friends and people I have suggested to and the feedback is the same "oh he describing me and my situation" it so uncanny. Over the last 20+ years, I have done many forms of "improvement" but Dr. Glover's work has had the most impact and tangible benefits.

Essential companion to the original text

Great for a broader understanding and drilling in the fundamentals of DEFM. I have the audible version but will add a paperback to my collection for quicker and easier reference.