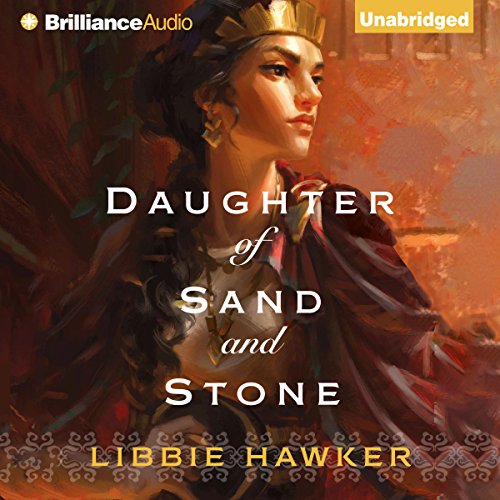 Daughter of Sand and Stone

When Zenobia takes control of her own fate, will the gods punish her audacity?

Zenobia, the proud daughter of a Syrian sheikh, refuses to marry against her will. She won't submit to a lifetime of subservience. When her father dies, she sets out on her own, pursuing the power she believes to be her birthright, dreaming of the Roman Empire's downfall and her ascendance to the throne.

Defying her family, Zenobia arranges her own marriage to the most influential man in the city of Palmyra. But their union is anything but peaceful - his other wife begrudges the marriage and the birth of Zenobia's son, and Zenobia finds herself ever more drawn to her guardsman, Zabdas. As war breaks out, she's faced with terrible choices.

From the decadent halls of Rome to the golden sands of Egypt, Zenobia fights for power, for love, and for her son. But will her hubris draw the wrath of the gods? Will she learn a "woman's place," or can she finally stake her claim as Empress of the East?

Narration was a snoozefest

Sigh this took forever to get through. I am an audio book lover the longer the better. But this narrator drove me insane. Her baselime voice is extremely monotone and basically boring. Itried to like this audio book but she just ruined it for me. It took me 3 months to get through this book when I have finished others that were 18 hours and up in just 2 days.
The book itself is good, characters are well done, good descriptions but this narration is so beyond boring I don't even know how to describe it.

The book is well written and does a great job of using imagination to breath life into the story of a real and triumphant woman for whom not enough is known. As a writer of historical fiction myself, I highly recommend this book.


If you have misophonia (a strong dislike of certain sounds), you may find the voice actor's voice rather troublesome. Her voice is quite nice, but she has an elongated s sound which can cause trouble listening to the book.

The rise and fall of a women

The story is all about one women's rise to greatness only to fall losing all that she coveted . It was daring and courageous for a women to be anything more then a pawn in political gain or a means to a son. This story follows the legend on the warrior queen. Zinobia, the main character is both likable and courageous. I received this book at no charge in exchange for an honest review. Great history lesson. Do listen to the authors history lesson at end. Extremely interesting.

Terrible inflections. Story read like a script from a newscaster, or someone reiterating a book report.