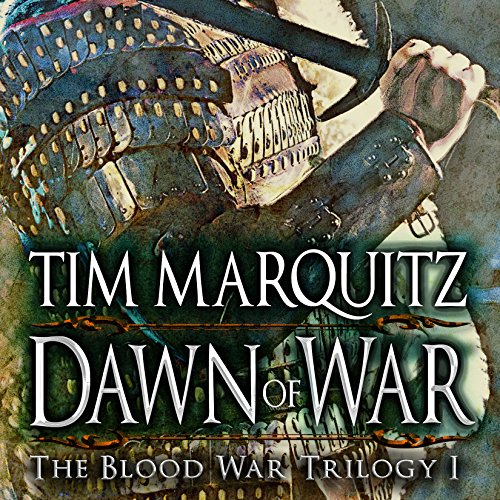 For hundreds of years, the bestial Grol have clawed at the walls of Lathah without success. Now armed with O'hra, mystical weapons of great power, they have returned, to conquer. Witness to the Grol advance, Arrin can abide his exile no longer. He returns to Lathah, in defiance of death, with hopes to save his beloved princess and the child born of their illicit affair. He finds her unwilling to abandon her people.

At her behest, Arrin searches for a sanctuary for them only to be confronted by the Sha'ree, a powerful race long thought gone from the world. Through them, he learns it is not just the Grol that threaten the land. Empowered by a magic never before seen, the savage nations spread chaos and ruin across the realm.

With Lathah under siege, and the world on the brink of cataclysmic war, Arrin must strike a deal with the Sha'ree to take the fight to the Grol, or forever lose his one true love: his family.

What listeners say about Dawn of War

Not a bad story

I actually liked this story. I tried super hard to listen consistently, but the narrator’s voice keep putting me to sleep. If you can stay awake long enough there is a good book in here.

A sprawling Epic fantasy in the best sense!

I was a big fan of the authors Demon Squad books, as well as his other work, so When I had a chance to listen to this one, I jumped at it. I can't say enough good things about it It is a sprawling world, With multiple different original races, Magic that is rare enough that when it's used, it is a shock to the characters, and fully fleshed characters with actual motivations that make sense. The main character, Arrin, a disgraced guardsman exiled after an illicit affair with his charge, The Princess of Lathah, which resulted in a child. He has no plans to return, until he witnesses the bestial Grol (think beast form werewolves), destroy a city a few days away from Lathah. He knows he must warn the city, even if it means his death, to ensure that his love and their child can escape. The story only takes off from there. There are other story lines, leading a diverse group of characters to meet with members of the worlds elder race, long thought dead, who themselves are declining due to magic that has become poisonous to them. If this sounds intriguing, believe me, it is, and only got better as the story progressed. The characters are rich, fully fleshed out people, with realistic motivations, who are trying to survive in a world gone mad, or are the ones trying to make it go mad, in the case of the villains. The magic of the world is mostly invested in items, except for the elder race, who can personally wield magic, which is slowly killing them. This book should appeal to any fan of Mark Barnes Echoes of Empire books, or any fan of sprawling epic fantasy. I listened to this at 1 1/4 speed, since John Pruden's narration seems to have longer pauses in it, and this made it much more enjoyable. That's just a preference thing, though. I can't wait to get to book 2 of the series.

A lot of characters with weird names. Got confused couple of times. Otherwise it was good
I like stories that are creative but need to be longer

No idea what this is about

Listened to the whole book and I have no idea what it was even about.

It started the good out matched. A the middle they we’re hopeless. I don’t like this kind of storylines.

Honestly, I don't know whether it's the somewhat disjointed storytelling or the stiff narration which is more responsible for my abandonment of this book. The author is trying but he really needs to realize that if you're going to use the "multiple viewpoint method of story telling you first must keep us interested in each point of view and not simply "shift" to another at no interesting point, but you also need to develop each point of view.

As for the narrator, again he's trying but his delivery is stiff and he's apparently not familiarized himself with the text (at one point he read "sacred" as "scared".

Nope, not finishing this one. Some of you may be a bit more tolerant but as I'm abandoning the book, 1 star.

too disturbingly dark/violent for me

slaughtering infants in their feces is too much for me and the matter of fact explanation of some characters' back story the second you meet them in the book seems hasty, but otherwise a curious world and magic system o would have listened to learn about if disgust didn't haunt me from earlier chapters. others will probably not mind.

You'll here 3 "voices": a bad John Wayne impression, a bad Zapp Branigan impression and an adequate robot; all delivering dialog with the emotion of that robot. Do you know how hard it is to get immersed in a story when you're expecting the narrator to say "pilgrim" all the time? Well, give this a listen and find out.

Multiple Hero's Journeys not better than one

If you like cast of characters that last more than half a book, this story is for you... And the rest is one melee after another.

Fantastic start to a new series!

The story turned out to just get better and better!
I'm so glad I tried this!