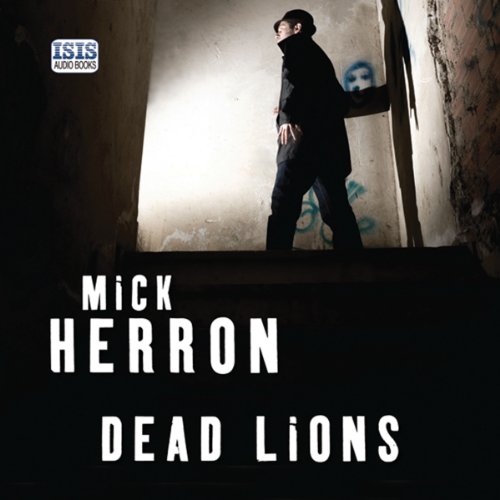 London’s Slough House is where disgraced MI5 spies go to while away what’s left of their washed-up careers. Now they have a chance at redemption. An old Cold War-era spy is found dead on a bus outside Oxford, far from his usual haunts. Slough House’s head honcho, the despicable, irascible Jackson Lamb is convinced Dickie Bow was murdered.

As the agents dig into the circumstances, they uncover a shadowy tangle of ancient Cold War secrets that seem to lead back to a man named Alexander Popov, who is either a Soviet bogeyman or the most dangerous man in the world. How many more people will have to die to keep those secrets buried?

What listeners say about Dead Lions

Every moment a joy. Buy it. I loved it. If you love intelligent, sharp, original, dark, witty thrillers

Everything fits. The characters, the writing and the plot work perfectly together for an immensely satisfying read - or in this case - listen. The narrator is an excellent fit. Highly recommend it for anyone who enjoys flawed heroes and cares about the coherence of the plot twists.

I re-listened to this immediately after watching the new TV treatment of it (desperately disappointing casting in season 2 after the excellent work in all respects of bringing book 1 to the screen).

The original story here (if you’ve watched TV first) is far tighter, the Slow Horses far more an ensemble group (all are living breathing highly individual characters, each flawed in a different style, with unique implications). The story while superficially similar is different enough from the teleplay to be worth experiencing both. For my money, though, the highlight has got to be Molly Doran (a long running character) to whom absolutely no justice was done on the screen and Shirley Dander who the tv turned from “all the sex appeal of a traffic bollard” into a 21st century americanised (boring and entirely unbelievable) ideal of a pretty but kick-ass girlie heroine (take liberties with the stories, guys, but leave my favourite characters alone!!!)

So, whether you’ve seen the show first or not, listen to the book - the Sean Barrett reading if you have a choice - you’ll meet new friends and have a great time.

"What this place needs is a cat"

Can't recommend this series enough. the Characters are so 3 dimensional and Sean Barrett handles them all in style.

One of the sharpest, wittiest writers of spy thrillers. Dead lions continues the Slow Horses series in brilliant style, with anti-hero MI5 spook Jackson Lamb running his bunch of weirdos and wash-ups who find themselves in compromised situations, either of their own making or because of their position as has-beens, copping the blame for others’ cock-ups.

There is a plodding nature about the series about the Slow Horses of Slough house which is captivating. It is a little like Le Carre, with more humour. I enjoyed it.

A small beginning to get to the bigger picture

As always an excellent narrative by Sean Barrett who smooth, rich voice eases the horrors of sudden death or near deaths.

Mick Herron's Slough House crowd, all of whom have lost the right to be active agents, are a bunch of losers and misfits resentful of their outcast status from the frontline spies or spooks in Regent's Park. Lamb's instincts and his "team's" fishing expeditions build a far from benign picture that, almost despite themselves, they rescue the City from the brink of disaster. Strangely or sadly, yet again they are unable to claim the credit or cover themselves with glory; they are the "Slow Horses" and unlikely to the heroes of any story or so Regent's Park think!

There is also a keen humourous streak that keeps you amused and laughing despite everything.

I am enjoying this series!

I would definitely recommend this book. It was my first thriller in some time and was a great choice. Sean Barrett is a fantastic narrator, bringing enormous character and humour to the dialogue. I will definitely be seeking this narrator and author again,

I liked the idea behind the book, it was a good premise, but failed to follow through. I disliked some of the characters and found others badly drawn so had no interest in them.

Would you listen to another book narrated by Seán Barrett?

He was pleasant enough.

Did Dead Lions inspire you to do anything?

Return to quality writers of the genre. Re listening to Le Carre confirmed how sketchily written this was and how little I cared for the characters.

I struggled a little to get all the characters straight in my head to start but as the story unfolds the different roles became clear. Very clever, lots of twists, I couldn't put it down.

Another good one in the series

I enjoyed this as much as the first one. I like the characters, who are somewhat flawed, and the story is good. I would suggest reading them in order so that you get to know the characters. The writing is excellent, too. The narrator, as ever, is first class.

Good, but not great.

I downloaded 'Dead Lions' immediately after finishing 'Slow Horses', which I reviewed was a "slow burn". Having established the characters, I was hoping the pace of this story would be a bit quicker. However, it's another 'slow burn' story, though as well developed and as excellently narrated as the first novel regarding the 'spooks' of Slough House.

However, what let it down for me was that regardless of the clever plotting there was a glaring plot flaw and an ending that I found anti-climactic after 8+ hours.

I'm sure I'll return to this series, but for now it's time for a break and a change of pace.

I just gave up

I dragged myself through the first 5 chapters and then just gave up. Too many characters and nothing really happening. More than enough exciting books to listen to.

Not as good as book 1. Bit slow

I quite like this series but I found the first book a lot better, more tense, edge of the seat type stuff. I found this one a bit slow and struggled keeping listening in places. That said, the narration is very good.

I was originally thinking I would follow the full series but not sure if I will now. Certainly need a break from it so gone on to Once a Pilgrim which I'm loving!

This book is excellent and follows a complete series. The characters are rich and human beings in their actions .The story is easy to follow and understand but remains believable . The story teller has a voice which adds much. Easy listening.

Nicely narrated but short gaps at times meant that it was easy to get confused about who or where the story was.

That said, it was well told and I did enjoy it

I am looking forward to the next instalment

Jackson Lamb is a great character and I can’t wait to see Gary Oldham play him . It’s a well put together story the characters are solid with good personality and the narrator did a good job

British spies down on their luck aren’t fired but engaged in tedious busy work at Slough House. Sharp minds and independent thinking are reignited by a political kidnapping. Poor editing makes this difficult to follow at times. Scenes jump abruptly to new locations or conversations without any indication in the narration, such as a pause or a musical tone, which is confusing to the listener. These are signposted by a space in the written text. A good book, well narrated, let down by production shortcomings.

Announce your chapters though. Admittedly, it’s just so I can find my place after I’ve fallen asleep, but Jackson Lamb wouldn’t put up with it.

I really enjoyed this book. On one hand I'm sorry I won't be able to watch season 2 of the show without knowing what happens but on three other hand glad I didn't spoil the book

I have loved all of the series. Mick Herron is a great author and the twists and turns keep you wanting to know more. All of the books have had me looking forward to the next of the series. Sean Barrett is such a fantastic narrator and has the ability to change his voice for all the characters perfectly. I have the next one ready to start. If you love a bit if espioage you won't be disappointed with any of this series.

Each story in this series just keeps getting better, if thats possible. Sean Barrett does a wonderful job as usual with the telling. Thanks again for hours of entertainment and pleasure.

I didn't think this book as exciting or interesting as the 1st book. It had a complicated storyline leading to a disappointing ending.
I thought the narration was good but because there's not a lot of differentiation between character voices it can be difficult at times knowing which character is speaking.
I also wish the chapters were numbered or there were pauses between scenes or locations because it can be confusing keeping up with what's going on and with whom.

Page turner couldn’t put it down

Fantastic tale of spy craft the twists and turns the characters and the language so descriptive.So much in the le Carrie vein. The main characters are so life like. The narration is superb Barrett is a master narrator. Looking forward to the next book