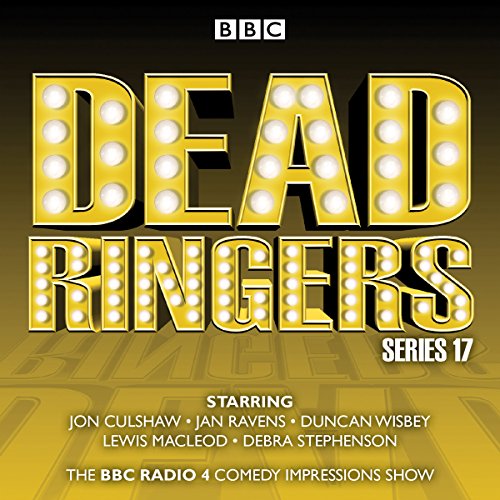 Dead Ringers returns with more sharp, topical comedy in these eight shows, featuring all six episodes from Series 17 as well as the two 2017 Christmas specials. Impressions and caricatures are the charming courtiers of explosively satirical truth bombs as Jon Culshaw, Jan Ravens, Lewis MacLeod, Debra Stephenson and Duncan Wisbey take on the worlds of politics and entertainment.

The two Christmas editions feature HM The Queen, Dame Joan Bakewell and 'Brexit Bulldog' David Davis as well as taking a look at how Britain's media would cope if Donald Trump pushed the button.

What listeners say about Dead Ringers: Series 17 Plus Christmas Specials

I've been a fan of Dead Ringers TV programme for ages, this is just as good. Topical, hilarious and brilliantly delivered humour. Clever writing and superb impressions. Would definitely recommend.

Excellent! I laughed my socks off. One of the best shows on BBC Radio in my opinion.

Highly amusing and worth every penny. Highly recommended and guaranteed to banish any blues away

I thought that the impressions were fantastic...really enjoyed it and would definitely recommend it to anyone who has been following politics lately and wants a lighter take on it.🙂

Sharp political satire with brilliant impersonations ,one of the best things from BBC radio four.