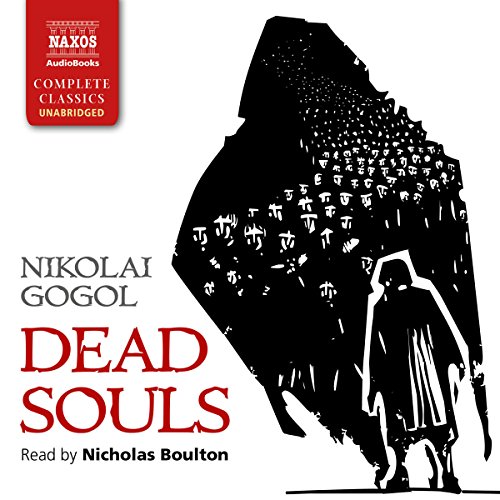 Gogol's great Russian classic is the Pickwick Papers of Russian literature. It takes a sharp but humorous look at life in all its strata but especially the devious complexities in Russia, with its landowners and serfs. We are introduced to Chichikov, a businessman who, in order to trick the tax authorities, buys up dead 'souls', or serfs, whose names still appear on the government census. Despite being a dealer in phantom crimes and paper ghosts, he is the most beguiling of Gogol's characters. Gogol's obsession with attempting to display 'the untold riches of the Russian soul' eventually led him to madness, religious mania, and death. Dismissed by him as merely 'a pale introduction to the great epic poem which is taking shape in my mind', Dead Souls is the culmination of Gogol's genius. Translator: Constance Garnett.

What listeners say about Dead Souls

It is a fun absurdist book.

It is too bad the story will remain unfinished. This is a wonderful comedy of the absurd. It has a great antihero. The performance was great.

I have never truly been struck as an American,

as i have by this book. this story SCREAMS across the ages, not to all maybe, but to me. I would give anything, anything at all for it's completion. and I thank all that that were responsible for the work they poured into it.

Hilarious and well done, but massive sections of the manuscript are missing?

The book is well performed by the reader, and the text itself is perfectly wonderful. I didn’t expect it to be so clever and comical. It’s fantastically funny.

Sometimes, audio books from Audible (elsewhere too?) contain glitches which seem to sometimes result in missing phrases/passages, or duplicated phrases/passages. The character of the glitches vary, but a glitch is a glitch. In this book, there are several instances when the reader says something like (paraphrasing) “an extension section of the manuscript is missing here.” It’s a difficulty of the audiobook format that we cannot easily know, I’m the moment, whether the author has written these words directly and means to imply somehow that he has been conveying a story whose true source is some unnamed 3rd person, which is how I took it, or whether there is some other problem with the book itself. And there’s a question as to how such problems might have arisen. Who knows! It’s not explained. At first, these missing sections, for me, added to the comedy, and added mystery and I wondered whether Gogol might later explain to us (he often speaks as the author directly to his audience) why the sections are missing. It seems, however, that sections of the actual manuscript are simply missing. After finishing the audio novel and researching my question online, I see that it’s common knowledge that the book simply ends mid-sentence. I haven’t seen, however, any explanation of the several other noted missing sections. There is one break in the story that is quite unsatisfying, unfortunately, a break after which our putative hero (or antihero) is suddenly apparently wealthy, and seemingly no longer traveling at all but is quite established. This is altogether confusing. Some greater warning, I think, is warranted.

Even so, this novel is truly excellent and excellently performed. I do not at all regret having bought it or listened and plan to listen again before long. A true joy and delight.

Enjoy traveling to a different time and place

Well done, pacing problems between books I and II

Very well done. The pacing in the middle dragged a bit for me, Chichikov's backstory is great, but there's a lot of impromptu poetry and descriptions of nature that slow things down.

Nostriov is entertaining and Boulton's performance alone to put a big smile on my face.

Classics can be entertaining even with dead souls

I enjoyed the book which I find oddly amusing. I was a bit disappointed by the sermon at the end. I can empathize with the author indignation with a corrupt bureocracy but his stand against it, in my opinion, weights down the novel. Mercyfully the moral of the story is at the end and not too long so it is bearable.

You simply couldn’t ask for a better audiobook version of this classic of Russian literature. So lucid and enthralling it makes you question whether reading the book in the traditional method would have actually been far less of an experience. One doesn’t want to actually say, but one can’t help but think it.

The life of 19th century entrepreneur

First of all, I have bit of a soft spot for Russian classical literature, maybe because I still haven’t read one bad book from this genre. Second of all, Dead Souls is yet another stunning classic. The story revolves around character named Pavel Ivanovich Chichikov who perfectly fits description of modern day entrepreneur except he lived in different time of our history. He goes from town to town, trying to execute his master business plan and meets un-ending variety of characters. And this is where the biggest strength of Gogol and this book lies.

The unimaginable attention to detail Gogol gives to every person, town, or anything mentioned makes it very easy to use your imagination and construct this places in your mind and start living the story like you were there. The character stereotypes he portrays are so true that I cannot fathom out how he could know all of this back in 19th century. After you read this book you will come to understanding that we as people haven’t changed that much in last 200 years. All character traits and stereotypes are the same today. We have advanced technologically but not as humans. Our mindsets are still the same. If you let it, this book will teach you a lot about how people behave and how to deal with it.

For some people these constant descriptions of details might get boring after a while, and story can get confusing as a result. But, I have enjoyed everything thoroughly. And yes, the book is missing a lot of pages in second part and ends mid-sentence. The usual explanation is that Gogol went mad and tried to destroy this book. However, me personally I like the theory that he didn’t go mad but quite the opposite. That he did it all on purpose to fit the overall theme of the book which I don’t want to spoil. The audibook narrator Nicholas Boulton is simply amazing. He handles all the different characters perfectly. So, get this audiobook and indulge in it, enjoy every second.

Wonderful reading - Nicholas Boulton does justice to the eccentric and brilliant writing of Gogol. I love Garnett’s translation as well.

150 years later and the world looks the same

Great book! I highly recommend it. It's impressive how little we have changed in the last 150 years. I was impressed by how well, with such subtle details and very fine irony, Gogol described the human nature.