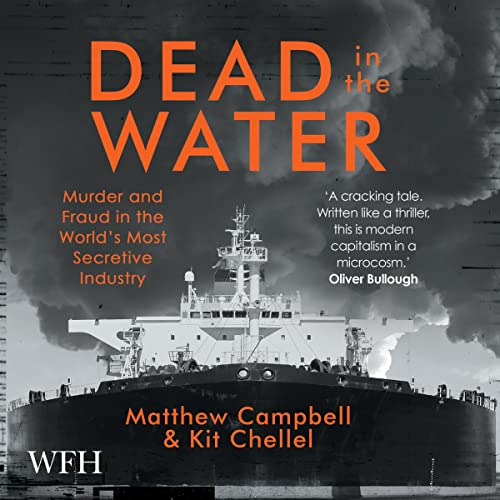 Dead in the Water

In July 2011, the oil tanker Brillante Virtuoso was drifting through the treacherous Gulf of Aden when a crew of pirates attacked and set her ablaze in a devastating explosion. But when David Mockett, a maritime surveyor working for Lloyd's of London, inspected the damaged vessel, he was left with more questions than answers. Soon after his inspection, he was murdered.

Dead in the Water is a shocking expose of the criminal inner-workings of international shipping, an old-world industry at the backbone of our global economy. Through first-hand accounts of those who lived the hijacking—from members of the ship's crew and witnesses to the attacks, to the ex-London detectives turned private investigators seeking to solve Mockett's murder—award-winning reporters Matthew Campbell and Kit Chellel piece together the astounding truth behind one of the most brazen financial frauds in history.

What listeners say about Dead in the Water

This will make you go wow

This book starts innocently enough, with David Mocket going to Yemen to work and live. In the middle of the book, we discover a car bomb has killed him. In the first chapter, we also learn about the threats to his life.
From there, Kit Chellel and Matthew Campbell take you on a journey into the murky world of shipping, scuttling, fraud, insurance, and how the ruthless get away with every criminal act.

The tale is fascinating, and I applaud the authors for keeping me on the edge of my seat for the entire duration of the book.

In the audiobook, Tim Bentinck's narration is marvelous. He is never over the top, yet he pulls you along as the book progresses.

This is brilliant. I picked it up on a whim and loved it. Am I shocked? Yes, and no. Have I been enlightened, and did I learn something? Yes.

One would think that this was a script of some thriller movie, without realising that it was based on true events. Couldn’t stop listening once I started.

Had to remind myself this is Not fiction

This is an amazing story. From beginning to end. Reads like a thriller I had to remind myself that this was fact.

I downloaded this as a recommendation from audible. The book summary does it know Justice.

Addictive listening while effortlessly delving into an insightful account of how both global shipping and large scale insurance actually works.

l looked at this title for quite a few weeks before purchasing it. l was not disappointed.
A fascinating up to date story that is well researched & narrated. lt highlights how morals within the historic shipping insurance firms in the C.o.L are so disappointingly scarce.
l wasn't surprised!
lt is after all common knowledge these days of what goes on within this toilet of humanity!

Excellent! As someone who works in the insurance industry and deals with Lloyd's I found this fascinating. An excellent account of the circumstances that lead up to the murder of David and an amazing summary of the dreadful inaction by Lloyd's, Police, Investigators. Money makes the world goes round, sadly, even at the cost of good people's precious lives. Will be 100% recommending this to my insurance colleagues!

One of the best business books I’ve ever read

This is a really superb tale of a colossal insurance fraud involving murder, blackmail, ex cops with hearts of gold and shady characters. I loved it. Reads like a thriller but with a Dickensian amount of characters involved. Brilliant at breaking down the many complex layers of the shipping world too. Well worth it.

Very well written and concise. Great to get a good insight in to this mainly private world.

Dead in the Water by @kitchellel & @MattCampbell. This book is an example of journalism at its finest that uncovers deadly corruption within the shipping industry. The depth of research is astounding and the writing skilfully crafted. A top notch read for all 📚5/5🌟 #bookreview

a well written sorry that read like your latest police novel, expect as far as we know, it is real.
Easy going and really interesting for anyone that is willing to look behind the curtain of the shipping industry.

What an eye opener

Very interesting, book. Sad that wealth consumes the conscience of some people. , ,

Fascinating insight into a world most people know very little about. Enjoyed the book on a long drive. Thanks for all the research.

Fantastic book but scary when see people flaunting the law with no problem with inflicting pain and death on innocent parties. Also highlight that $$$ is everything. And lastly the lack of moral fibre in supposed law enforcement agencies.
Congrats to the author and pvt investigators.