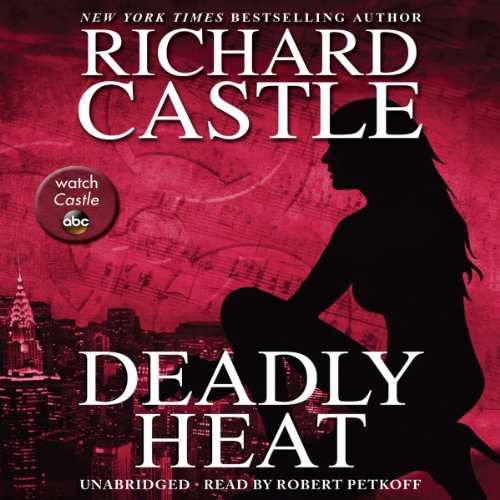 Nikki Heat and Jameson Rook race to stop a deadly threat from Heat's past as well as an all-too-present serial killer, in Richard Castle's follow-up to the New York Times best-seller Frozen Heat.

Determined to find justice for her mother, top NYPD Homicide Detective Nikki Heat continues to pursue the elusive former CIA station chief who ordered her execution more than a decade ago. For the hunt, Nikki teams once again with her romantic partner, Pulitzer Prize-winning investigative journalist Jameson Rook, and their quest for the old spy and the motive behind the past murder unearths an alarming terror plot, which is anything but ancient history. It is lethal. It is now. And it has already entered its countdown phase.

Complicating Heat's mission to bring the rogue spy to justice and thwart the looming terror event, a serial killer begins menacing the Twentieth Precinct, and her homicide squad is under pressure to stop him, and soon. Known for his chilling stealth, the diabolical murderer not only singles out Nikki as the exclusive recipient of his taunting messages, he names her as his next victim.

Can the heat rise much higher

If you could sum up Deadly Heat in three words, what would they be?

Sorry more than one

Would you listen to another book narrated by Robert Petkoff?

Yes but hope it will not be from this series. Nothing personal Mr. P

It just keeps getting hotter

GREAT follow up to the last book. This series always leaves me wanting more.....heat. Read other reviews about the book knocking the narrator. I can understand the comments but I do feel Petkoff did do a fine job with my only caveat being that Heller did a better job with the differences (voices) of the core ensemble. Why I do not know as the other characters in the book were affordered their own unique inflections, accents and well life. I do hope Mr. Heller will return for the next Installment of Nikki Heat as in other series read many times by a particular actor we learn to identify with the "sound" they have created for each character. That said I will be anxiously awaiting Mr. Castle's (who ever you are) next book either it be stormy or hot..

Would you try another book from Richard Castle and/or Robert Petkoff?

Another book by Richard Castle, YES. Another story by Robert Petkoff ..Probably not. I was eagerly awaiting this book. Very disappointed in the narrator. There is no voice difference between characters. It all just sounds like him "reading". Thank goodness I read the previous book and can still picture the different voices, so I still feel like I know the side characters as they are speaking.

Who would you have cast as narrator instead of Robert Petkoff?

I would have used the previous narrator, Johnny Heller. Some people didn't care for him, but at least the characters came alive while you were listening. There is a reason they call it a "performance".

Yes, once on dvd or cable.

I love the banter back and forth between characters and the family like feel I get from the interaction.

5 minutes into the book and I was wanting Johnny Heller back. He did a better job of bringing the characters to life.

Was Deadly Heat worth the listening time?

If Johnny Heller were reading it!

Peykoff is okay as a narrator but I think Heller does a better job overall.

Would you listen to Deadly Heat again? Why?

Yes, because I enjoyed the story. Wish there were more in this series.

Who would you have cast as narrator instead of Robert Petkoff?

I really enjoy the humor in this series. I also like the fact that it keeps you on your toes and is not something that is easy to figure out.

A Fitting End to the Journey

Yes, I would definitely recommend it. Anyone who's a Castle fan will see the characters come through in the pages of the book and enjoy a satisfying conclusion to a storyline that run almost from the beginning of the series/book.

It's a close call, as all ways, between Rook and Heat, but I have to go with Rook. Rook's boyish enthusiasm over the crime as well as how his source connections are legion and always seem to give him some advantage that amazes and confounds Heat.

Yes, I listened to and from work as well as fell asleep to it each night. I'm restarting it right away.

I loved the Acknowledgements and his thanks to the Castle characters and the actors themselves. Amusing Castle finish to a good read.

I can't decide which book I love more. All of these books are amazing. Perfect for road trips.

I love this book series. It is well written and has good character development. I love the Firefly reference in the book.

More twists and turns than an English country lane!

Another cool Nikki Heat book by "Richard Castle" (btw, who actually writes these, as I'd love to read some of their own books!), this time with Nikki torn two ways - between hunting for a serial killer nicknamed the Rainbow Killer, and finding the remaining elements behind her mother's murder and stopping whatever plot they have planned. All whilst battling interference from her Precinct Commander, a mole in her team, problems caused by the ever-useless "Defective" Hinesburg, and DHS (especially Rook's ex, Agent Bell!). But when is Nikki's life ever easy?!
I love these books, which are a spin-off from the Castle tv series, as they're well-written (unlike some tv spin-off books!) and really keep you hooked with all their twists and turns. And this book definitely doesn't disappoint on that front - it's more twisty than an English country lane! I have the audiobook of this book, and it's brilliantly narrated by Robert Petkoff, who's great at bringing out the drama and characters in the stories. I think I must have listened to this book at least 50 times! I cannot recommend these books (and audiobooks!) enough for all Castle lovers, or for people who just enjoy a murder-mystery.

It's a spin-off of the hugely successful TV series Castle, so it was great fun to meet again the characters I already knew and laugh at their familiar banter. The detective story kept me interested, as well as the developments around the heroine's mother's murder but it's the growing love affair between the two main characters that's the main draw.

What other book might you compare Deadly Heat to, and why?

Rising Heat, Frozen Heat - all the Nikki Heat books supposedly written by a character in a TV show. I've read them all.

Marketing GENIUS to publish books supposedly written by a central character in a TV show! This 'fiction within fiction' keeps the reader on his/her toes all the time, mentally separating the two genres, and the ABC television people pulled a winner here, I reckon.

Richard Castle at his best! A fantastic listen, plenty of plot twists that keep you hanging on right to the very end, just when you think you know whodunit you are proved completely wrong. The book never lost pace and is very well narrated.

The way it wines through and gives little hints about the ending.

What does Robert Petkoff bring to the story that you wouldn’t experience if you had only read the book?

I only listen so I cannot say

if you have not read or listened to previouse Nikki Heat books, take the time to do so it is a great series.