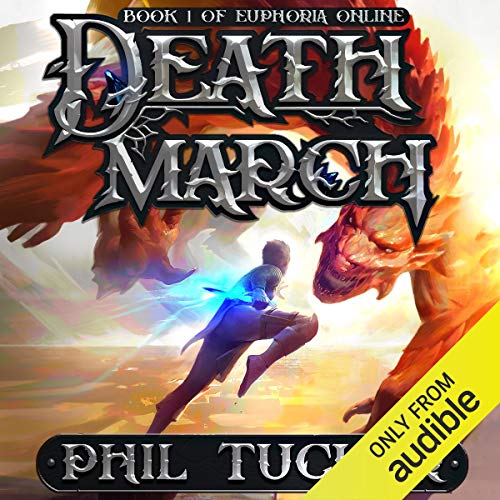 Narrator Vikas Adams pushes the boundaries of LitRPG to the next level, bringing this immersive VR gaming drama to nerve-jangling nirvana.

Pro-gamer and eighth grade teacher Chris is preoccupied by thoughts of how to save his brother when he gets an invitation he can't resist:

Want to play Euphoria for free?

The free pass brings him to a portal for the newest and most awesome game in the universe. Chris agrees to play Euphoria Online in Death March mode, a secret and deadly level of the game. The real-life consequences of the game mean that if Chris can emerge victorious from a virtual six-month battle with necromancers, ogres, and wyverns, his brother goes free. But if he loses, well, game over.

Well then. I finally got some time to sit down and listen to this badboy, and while it’s only 9 hours or so long, it still took me a while because of so, so many other things happening in my life. I hate when that happens, but c’est la vie!

However this is one of those books that you just fall into for a while and you don’t realize how much time has passed since you started. I had an afternoon at work just fly by here, and before I knew it it was time to go home. That’s always good!

This is the story of Chris, who is a teacher and sometimes-pro-gamer, and in a rather untenable position. All he has left of family in the world is his brother, and his brother is in prison. He was caught scavenging off the coast of Florida, which in this world is partially flooded, and scavenging is a big no-no. There’s word that he’s going to be given the death penalty as an example to others as well, so Chris is scrambling to find out how to help him.

Suddenly and in seemingly the nick of time, Chris’ ex-girlfriend calls and says she has a free weekend pass for Euphoria Online, and would he like to have a go at the newest, most awesome game in the universe? Well, yes he does, because he has a brilliant idea!

Euphoria Online is a game that brings you right into the world. Your brain is hooked right into it, so it’s a much more real experience than any of these VR games that are all the rage. But, as such, it costs several thousand dollars for a weekend in the game. Good news though! One weekend in the real world feels like 6 months in the game. So at least you feel like you’re getting your moneys worth. There’s also a hardcore mode, like in Diablo for example, which in this game is called Death March. You get to die one time. Period.

Of course, with your brain all hooked in there and stuff, Death March is going to really for realsies kill you too, so there’s that. :D

Of course, that’s not going to be as easy at it sounds.

I really enjoyed this one. I liked Chris as a character and I really wanted him to succeed in his quest. I liked that his character, while being suitably awesome enough to… yanno, not die immediately, was still fallible at times. He makes poor decisions at times, and he pays the price for doing so. It was quite fast-paced and the adventure was hair-raising when it needed to be, and took a bit of a break when needed as well. The addition of another character that he runs into, Lutharia, was neat. There was a bit of a romantic subplot here, which was actually really cleverly done, since charisma checks will often subvert a chance to be flirtatious in a way that doesn’t sound cringeworthy. Other characters Chris meets on the way are also fun. I especially liked the goblins.

Many books in this genre focus on stats a little too much for my liking, but this isn’t one of them – it seems to focus more on abilities than stats for many things. While the constant repetitive nature of some of the details of character sheets and what have you doesn’t always translate into audio well, it didn’t bother me overmuch here. This one is certainly repetitive when it’s time to look at stats, but I find that I could listen to Vikas Adam repeat things several million times and not really get sick of it, so it’s got that going for it, which is nice. ^_^

Guys, honestly, finding a narrator you really enjoy listening to and then getting *super* excited when you learn that they are narrating things by your favorite authors is one of those things that makes life worth living. :D

I am admittedly rather hesitant to jump into most of the LitRPGs I see (and there are very, very many to choose from at this point), since I had some real not-great experiences with a few of the first ones I ever listened to. I have been trying to choose far more carefully than I did a couple of years back. Thankfully, this is one that I never worried about not liking. Phil Tucker has never disappointed me thusfar, and so I was quite glad to hear that his kickstarter was a success.

This one gets 5/5 stars from me. I would totally play Euphoria Online. But not on hardcore mode. Man, that never goes well for me… my deeds of valor have absolutely been forgotten forever. :D

I can’t wait for the next audiobook in this series. ^_^

I deeply enjoyed this book. Went through it in about a day or two. I enjoyed the story. Will get the second book. Character depth is sort of there. But dialogue at times leaves a lot to be desired along with silly emotional responses. At other times is strong and enjoyable. Also, at times very repetitive in the sense of when he uses adrenaline rush. Like we get it. Please stop saying the same response every time.

Found this book not only wonderfully performed by Vikas Adams, but incredibly nostalgic and engaging. I was reminded of my youthful days of playing MUDs, Magic: The Gathering, and numerous RPG games. Tucker has an amazing ability to create characters with depth and introduce the LitRPG genre in a way that appeals to both experienced players and the newbies. Couldn’t wait and had to start Book 2, Nightmare Keep, before I could start this review....

Unlike many new LIT RPG books, this one gets you really hooked into the plight of our hero as he does everything, even risking his life, for his brother. His motivation pushes him into what appears to be a weekend of immersive VR gaming, only to find everything has been shattered, and his plan for quick easy leveling quickly turns into life or death decisions at every step.

Once I started listening to this, I could hardly bare to stop! A really good book, and I'm looking forward to the next in the series.

I can't wait for the next two books. I knew I was hooked by chapter five. I really liked how there wasn't endless updates to the stats.

Only complaint was that it ended too soon.

Narration was great, the story was exciting and griping. I can't wait to listen to the sequels.

MC is an idiot. ProGamer who is always tricked.

Interesting world developments both in and out of the game, plot, and characters. But huge potholes with an idiot for the MC. A Pro Gamer who bets his life on a game, that he could not be bothered to research. Who falls for obvious tricks his rich manipulative Ex-girlfriend sets to limit and trap his gaming avatar.
Could not get intontje story with such a poorly thought out Character and ever other paragraph going on about how he will die for real if his character dies. And how about finally actually explaining the brother's crime that is earning him a death sentence... Not little memories scenes, but the whole story...
What should have been an interesting plot hook and motivation for the MC, just makes less sense the further it goes on.

I tried to give this one a try. Truly I did. The narrator is very talented but I don't believe he was the right choice for this series. He is overly dramatic in a novel that is already written in an overly dramatic way. The leveling and exp are too arbitrary as are the extreme luck of tye main on not being squashed. Also remember the brother who's actual life is at risk while the main cries and risks his actual life as well as his brother's salvation for his less than a week's acquaintance friend's completely respawnable characters. Not to mention that the main is only altruistic for his own feel good emotions and is both suicidal and emotionally unstable. Really just an asshole with a hero complex.

the main character flips between severe suspicion and unwavering faith towards a particular character but has 0 reasons, none whatsoever for 1 of those.
hint: it isn't the suspicion he needs to give up.

have not had much experience with litrpg genre, but hated that the book was over. I just wanted to keep going! narrator did a great job as well!

Flippin' fantastic & on a par with RP1!

I'm a new reader to LitRPG books, but loved both the Ready Player One audio and movie. I loved this equally so - both story and narration.

Pacing, scenes, characters and combat were spot on. None of it dragged on or dragged out. I was apprehensive re the stat upgrades, but that awoke the gamer in me and I was excited to see how the protag would proceed.

Cinematic and clever setting coupled with witty banter and a compelling plot. I cannot wait for books two and three!