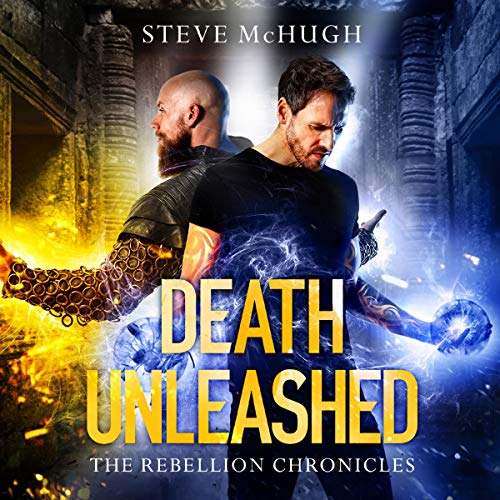 A deadly venom. A looming rebellion. A vicious siege. And the clock is ticking.

For sorcerer Nate Garrett, the stakes have risen. If Asgard falls, he may lose much more than his home - he may lose the thing dearest to him. To stand a fighting chance against Avalon, he must be ready to go to war. But when his best friend and father are poisoned, Nate must race against the clock in a desperate quest to find a cure.

Layla Cassidy is tasked with gaining the aid of the Valkyrie in Valhalla, but once there, she finds herself involved in another rebellion and must pick a side.

Meanwhile, Mordred finds himself on a hunt for Excalibur, a weapon of incredible power that would aid the rebellion in their fight against Arthur and his allies. But to retrieve it, Mordred must face uncomfortable truths about himself.

War looms over the rebellion, and the battle for Asgard is at hand. Time is running out as Avalon's forces threaten total destruction. But Nate can't be in two places at once. Can he find the cure, and can he, Layla, and Mordred save the realms before it’s too late?

What listeners say about Death Unleashed

Steve does it again!

This latest chapter is everything we’ve come to expect from Steve! I can’t wait for the next installment.

Alright, I'll read the last book when it comes out in December then I'm done with books that are a constant on-going story of the same story! I like Nate and Selene and Mordred and Hades and Persephone, and I really like Remy. BUT I just can't keep waiting for the next book while I've read 30, 40 or 75 books since the last one about Nate and his team of men and women doing all they can to kill Arthur and Merlin. *******

According to the list all four of these people narrated the book: Simon Mattacks , Elizabeth Knowelden , Shaun Grindell and Steve West. I couldn't tell you who was who but I can tell you that when the women read everyone, men and women alike, sounded the same.

I love this story, an amazing addition to an already great series. Steve brings it yet again with this book, you'll get more of your favorite characters on a rollercoaster ride of death.
Can't wait for next book.

sooo worth the wait!!!

i love Everything about this series! throughout, ive laughed, cried and been genuinely moved. props to mr mchugh and his narrators=))
💗💗💗

... another thought ... you know how when a series that's gripped you, that you've Loved the Entire way thru, ends, and you're left with that feeling of emptiness, of feeling bereft, and wondering what to read/listen to next bc nothing could Possibly compare??

well, i know i only just finished this one last night, And that there's a new book waiting for me in (very) far off December, but That is how i feel today. i can't stop thinking about Nate and co. and how they will stick with me long after today, and how December feels like an unattainable future ...

on the bright side! when December finally Does roll up and im hating life bc it's, yes, December, i will then restart this series from book one and listen all the way thru Again, until i reach the long-awaited Horsemen's War, and go thru these feelings all over again. it will be well worth it!

Good but could have been better!

If it wasn't part of the series....
I would probably RETURN IT!

Death Unleashed
The Rebellion Chronicles, Book 2
By: Steve McHugh
Narrated by: Simon Mattacks, Elizabeth Knowelden, Shaun Grindell, Steve West
Hera is trying to kill as many of the "children" as she can. A great deal of action with Mordred and Nate. Odin also had a big part. Interesting plot, quick and intense pace! Love the characters! Some losses occur😑, some twists, and good things develop. Loved it.
Love all the narrators! Preordered the next book!

I can't get enuff of this author. i'm going to pre order the next book on that alone

Showdown of the gods

at least 2 big battles, heros and villains die. Excited to continue this saga. You will find yourself rooting for these characters. fun read.

Not as great as previous books.

Whilst Steve is a fantastic writer and I love his work this book felt somewhat lacking in places. it was as if the writer was not ready to push forward with the story but the publishers were insisted he did. Saying that the story do work better towards the end of the book and does still leave you wanting more. The naration while pretty decent is never the same if you change voices in the middle of the series and I miss the grittyness of James Langtons portrayal of Nate.
if you have kept up with the series you will know what I mean once you listen to this book

Please guys, seriously stop letting Ms Knowleden ruin any more books. She doesn’t know how to articulate her sentences, when She lists people who are working together on something it is particularly horrible.

the story is good but similar character voices

The penultimate story in a gripping tale.

Great story from book one. The characters are honest and believable. The progression the story takes you through, introducing new story lines and satisfactoraly ending others, keeps the narrative fresh and interesting. Baddies you love to hate, enemys that become friends. Strong ethical role models of all genders species and sexual orientations. What could be a very macho, "look at how cool this glock 17 with silver hollow tips, whilst I deal super manly death and destruction" set of books, it is open and accepting, and at its roots, upholds honesty, moral values and looking after those you love. (Whilst dealing death and destruction, with a glock 17 filled with hollow tip silver rounds) to those that stand in your way.

Great narration by all involved. A couple of mildy dodgy accents but believable all the same... Who am I to say what an ancient Mesopotamian sounded like....
Can't wait for the last book.

I've really enjoyed most of the hellequin novels, but this one didn't quite hit the mark for me. It was good, but had some cliche moments simply to allow events to occur and for some reason I felt the swapping of narrators jarring.

Possibly the best one yet !!!

Amazing story yet again!!! I got more into the new narrators this time round and throughly enjoyed all elements of the book.

Another thrilling book. Excellent writing, the descriptions, dialog and action all spectacular. Even though the situation is dia humour and courage are maintained. Love the descriptions of all the different realms. Can't wait for the next book.

I’ve loved all the other books with a passion, this one was a bit of a damp squib with me. Don’t think my brain copes well with multiple narrators. It took me a couple of goes to actually get going
Each individual narrator is great but together in the same book made it a struggle

The guy doing Mordred's voice narration always takes the enjoyment of the story out of it whenever he comes on.