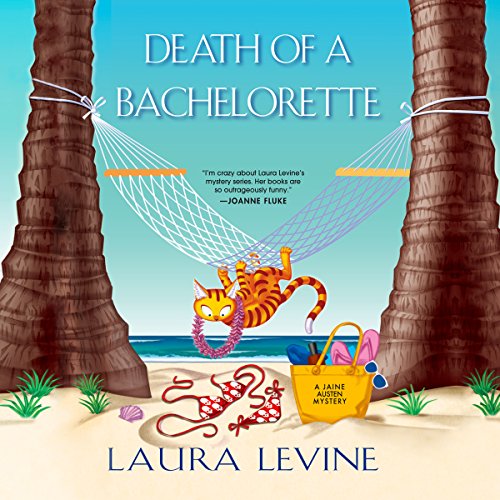 Death of a Bachelorette

Since she started penning dialogue for Some Day My Prince Will Come - a cheesy dating show that features bachelorettes competing for the heart of Spencer Dalworth VII, a very distant heir to the British throne - Jaine's life has been a royal pain. She's been fending off golf-ball-size bugs on the sweltering tropical island and having her patience tested by an irritable production crew and the fierce contestants who will do anything to get their prince. But Jaine never expected murder to enter the script. When one of the finalists dies in a freak accident, it's clear someone wanted the woman out of the race for good - and the police won't allow a soul off the island until they seize the culprit. Terrified of existing another day without air-conditioning, Jaine is throwing herself into the investigation. But she better pounce on clues quickly - or there won't be any survivors left.

What listeners say about Death of a Bachelorette

I love this series!

This series never fails to entertain me. I can't wait for the next one in the series!

I always enjoy the books where Jaine goes abroad somewhere a little more than the ones where she stays at home. Here Jaine flies off, with her kitty Prozac, to a tropical island. Prozac is your typical cat. Mischievous, hungry, a diva haha!! Cat lovers will definitely find her amusing.

Jaine is now the writer for a reality tv show. A job the previous writer left in a hurry! You'll quickly find out why when you meet the cast and crew. All interesting and unique characters. This author writes the best characters - quirky but believable! When one of the cast members winds up dead - murdered - Jaine must find out who did it! The local police are unqualified for the job - as they like to fish instead of investigate ha!

While this is all going down, Jaine is receiving messages from her parents who live in a retirement community and her neighbor, Lance. Her parents always are an interesting side story - so many entertaining mishaps that will make you laugh out loud! And Lance is such a bad friend that you can't help but laugh at poor Jaine's expense.

Not only that, but Jaine is being forced into a romance with a local tribe leader. This is one of her most entertaining "love interests" yet!! Wearing a tassel loin cloth and his rotting teeth on a string around his neck - he is not really her type haha!! But he won't take no for an answer and this leads to several hilarious and cringe-worthy meetings.

Jaine is able to solve the mystery in the end - and live to tell about it despite of her close brushes with death due to her sleuthing. As always, you will be surprised with the big reveal! Good luck figuring who the killer is and why. This series is perfect for anyone who likes a good laugh, cats, and cozy mysteries.

There should be more of these books. I have read them all and each one is better than the previous book. I strongly recommend this series.

I Love this series and this books is as enjoyable as the others. Highly recommend.

another fun one with jaine Austin and her cat Prozac. I have to admit there were several times when I knew what was coming and I knew the killer pretty early. I still love these as they are super fun.

I’ve listened to all the previous books in this series. They are a delight from the lead character, amateur sleuth and copy writer, Jaine Austen to the regular appearances of her neighbour, Lance, her best friend, and the emails from her parents. The ‘main’ character is of course Prozac her imperious demanding cat. The narrator does an excellent job and Jaine is an endearing character balancing her waistline with her love of food. She has various romantic entanglements and each book is hilariously written and narrated.