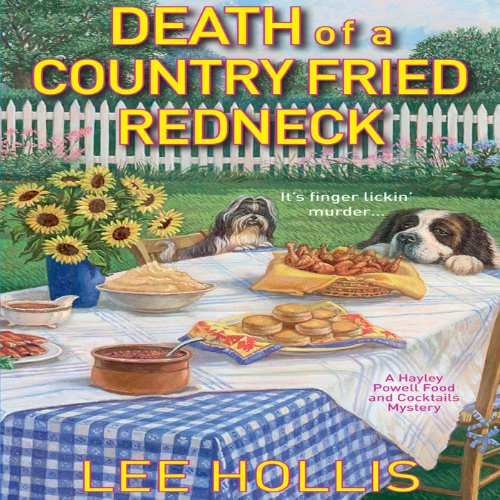 As a single mom, Hayley Powell already has a full plate - she's got deadlines to make and a teenage daughter with eyes for an aspiring singer-songwriter. But when country music superstar Wade Springer rolls into town, Hayley spies an irresistible side gig: Personal chef to her all-American idol. After he tries her home cooking, Wade's so impressed that he hires her on the spot - and invites her to dine with him alone.

Hayley and Wade are hitting all the right notes…until a body turns up. Wade's tour bus was torched overnight and a roadie named Mickey Pritchett came out well-done. But the real cause of death isn't barbecue: Mickey was shot, his mouth stuffed with one of Hayley's trademark chicken legs. An ornery drunk, Mickey had already made plenty of enemies in town, but Wade's reputation is on the rocks. Hayley reckons it's up to her to settle this mess - a charbroiled mystery with all the fixin's.

What listeners say about Death of a Country Fried Redneck

I really enjoyed this cozy mystery, and I especially liked that it had fun recipes and mini stories tucked inside the main story. It meshed well together and helped to develop more of an understanding of our main character and detective extraordinaire, Haley. She is busy balancing being a single mom, a new job, dating, and solving a mystery that happened to fall into her lap. It's a good cozy, pretty believable and enjoyable overall. Worth a credit!

This series is such fun and most recipes are ez and quite good. However, as a Mainer born n bred, I get very annoyed that the narrator cannot spend a few minutes to learn the proper pronunciation of even town names. It is jarring but not uncommon. Please- editor, do a bit of research to help out this otherwise pleasant voice!

This is better than the first but I couldn't get into it. I don't like the characters.

I do like the narrator for the most part, but someone needs to research the correct pronunciation of the names of the towns. Banger (instead of BanGOR with a hard G in particular.

What disappointed you about Death of a Country Fried Redneck?

the pronunciation of Bangor. It would have taken two minutes to google the proper way to say it.

What character would you cut from Death of a Country Fried Redneck?

None, I would have developed the main characters more.

I should have chosen more wisely, this is pretty 'bubblegum' silly. Did listen to the whole thing but would not bother with any more of this series.

Loved it. Kept me interested from the start and was full of plenty plot twists til the very end. As a cozy mystery fan, I would encourage others to try this series if not already familiar with it. It won't disappoint.