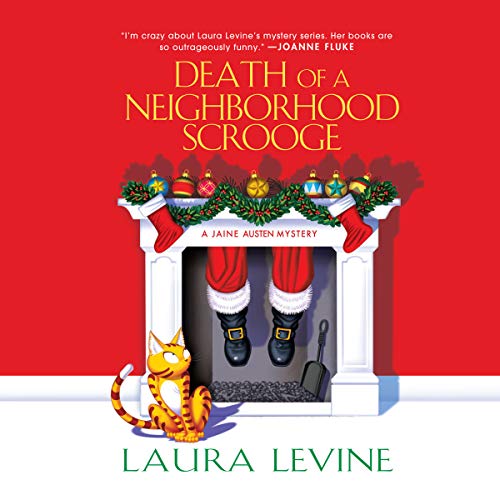 Death of a Neighborhood Scrooge

Scotty Parker is a former child star who once played Tiny Tim, but now he's grown up into the role of the neighborhood Scrooge. He cuts the wires on his neighbors' Christmas lights and tells local kids that Santa had a stroke. And his miserly bah-humbug attitude lasts year-round - a fact known all too well by his current wife, his ex-wife, his maid, and many more.

Scotty thinks he can stage a comeback with the screenplay he's working on (The Return of Tiny Tim: Vengeance Is Mine!), and Jaine's been reluctantly helping him edit it. So when Scotty is bludgeoned with a frozen chocolate yule log and the police start making a list of suspects and checking it twice, Jaine's name is unfortunately included. True, she's been under some stress - with Lance trying to set her up on dates and her fickle feline taking a sudden liking to someone else - but she's not guilty of murder. Now she just has to prove it - using her gift for detection to figure out who committed this holiday homicide.

What listeners say about Death of a Neighborhood Scrooge

another great one by Levine. i was glad Prozac was mostly out of this one. sometimes the cat antics gets to me. twist at the end. never had a clue.

These books have everything I love: mystery, humor, and cats! This one did not disappoint. Jaine is a relatable character. Not a perfect heroine, but a flawed individual whose quirks and mishaps leave you laughing and wanting more. This mystery keeps you guessing with a colorful array of suspects. The ending of this one left me in shock!!

death of a neighborhood scrooge

entertaining
enjoyed the characters. I didn't expect the ending of this one. it was fun to guess.

Best in the series

I have read every book in this series and I think this one is by far the best. As always, Jane gets the short end of the and is forced to give her writing services to a despicable former child star. When he is murdered, Jane has to clear her name. Lance isn't as annoying in this book. He's actually a pretty good friend in this book. Prozac once again proves that Jane would be better off with a dog. Daddy provides several laugh out loud moments. And, Jane snoops her way through the book to discover the killer. All in all this is an incredibly entertaining book and I look forward to the next one. Brittany Presley dies a great job bringing the characters to life and making this book an enjoyable listening experience.