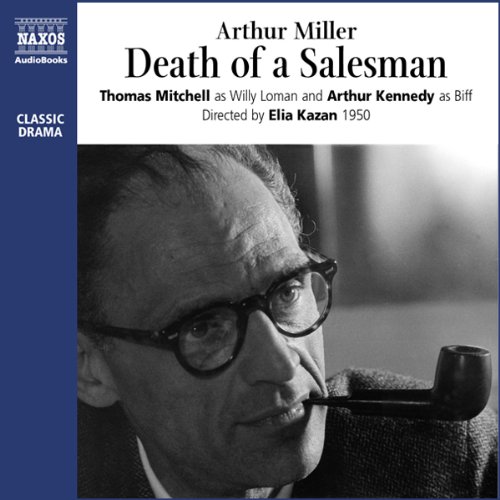 Death of a Salesman

Arthur Miller’s most famous play, Death of a Salesman, has become a key text in Western literature. This unusually powerful recording, made for radio in 1953, was directed by Elia Kazan who premiered the play. It features Thomas Mitchell and Arthur Kennedy as father and son.

Willy, a travelling salesman, based in New York, relentlessly chases material success. As the disappointing nature of his reality crowds in upon him, Willy and his family suffer the tragic cost of his delusions of greatness. A domestic tragedy, a cynical indictment of materialism and the American Dream, and a profoundly moving story of one man’s struggle to maintain his dignity in the face of continual adversity - Miller’s play is essential listening.

What listeners say about Death of a Salesman

Had to finish this at one go - it was so gripping! the actors have truly brought it to life.

The audio does not follow the text word for word. So if you plan on reading along with the audio, forget it. It skips a bunch of lines.

The performance in this audiobook is the best I've ever heard so far. Well worth the listen.

Early 1950s production, so the acting is of that era, and might seem a bit dated. The recording quality is not great, which I found very distracting. Good play, but as presented I wouldn't say great.

Could have been closer as certain things missing e.g. tape recorder in Howard’s office, etc.

It's great, but it's such a shame it's abridged.

Given how short the play is, I really wish this was unabridged. It's still very good though.

This audio book is extremely resonant. The voice acting was superb and the flute sounds played throughout were marvellous and gradually more heartbreaking. Although many lines were missed out, it was a very good listen. Sound quality wasnt amazing but nevertheless the story and the sheer emotion in which lines were delivered was extremely captivating and helped evoke immense tragedy. I cried.

A book of it's time

This is an interesting perspective of a man on the verge of a nervous breakdown. Desperately trying to maintain his status both among his work colleagues and within his own family whilst he becomes older and apparently unable to adapt to the changing world he lives in. He appears less able to command the respect he feels he deserves.

I found the narrators voices quite 'grating' at times, although perhaps this reflected the nature of the desperation the characters felt. I was also unable to feel great sympathy or empathy toward the main characters as they were too set in their ways. I think this book was probably very appropriate when it was first published, reflecting a world where the patriarchal society was changing. However, I feel it is now a little dated.

For something so short it's amazing how much it speaks out, I wasn't sold on it at first but by the end I'm really glad I gave it the time

This is one of the great modern plays, so needs no commendation from me. This production was first rate.

good use of background music

the music effectively substitutes the lighting and stagecraft specified by Miller's stage direction therefore clearly conveys to the readers when Willy Loman is imagining things and when he is speaking about the present.

I read this book years ago, and I am really pleased to have downloaded this copy. Very well read.

the great American dream in tatters

the acting is terrible, much too fast, clanky voices. They way Willy's dreams destroy him - brilliant portrayal of modern obsession with advancement and making something of yourself.