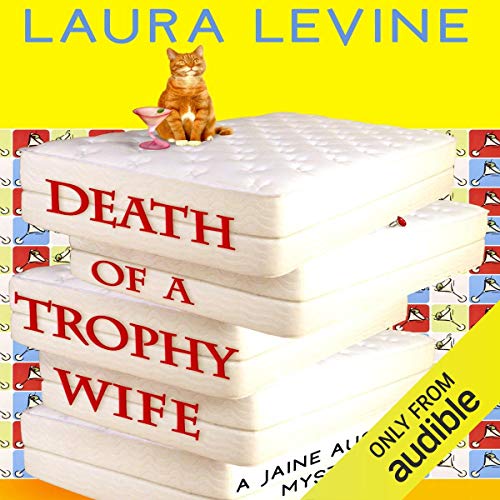 Without a job or a date in sight, freelance writer Jaine Austen is equally out of luck in finance and romance. So when her friend Lance offers to treat her to brunch at the Four Seasons, Jaine leaps at the invite. They've barely made it through the menu when Lance spots his friend Bunny, who is the new trophy wife of mattress maven Marvin Cooper.When Bunny generously offers Jaine a gig writing Marv's new advertising campaign, Jaine accepts the job, and an invitation to her upcoming soire. But at the party Bunny cruelly rules the Cooper mansion and before the evening is over, someone poisons Bunny.The police arrest Lance, but Jaine knows his murderous urges end at her closet door. Setting out to clear his name, she soon discovers a list of suspects longer than Bunny's credit card bill.

"Zany. . .series fans will find Jaine as funny as ever." ( Publishers Weekly)
"If you love a good mystery, this book is for you." ( New York Journal of Books)

What listeners say about Death of a Trophy Wife

I am thrilled that I started to listen to these books. They are incredibly funny and entertaining. I enjoy all of Jaine and her father's hijinks. The mystery is well plotted and fast paced. Anyone who likes light mysteries will love this book.

Would you try another book from Laura Levine and/or Brittany Pressley?

I would consider buying a book by Laura Lavine in print. Not an audiobook anymore.

Has Death of a Trophy Wife turned you off from other books in this genre?

I made it about a chapter in and I had to turn it off. I felt like I was in elementary school again being read to by my fourth grade teacher. The narration is awful.

If you could sum up Death of a Trophy Wife in three words, what would they be?

I like that there was more Lance in this story. Although I don't love the narration for him, I enjoy his character - even when he frustrates me haha!!

She always does a fantastic job. I love the sarcasm in her voice

These books always make me laugh out loud!! Outrageously funny