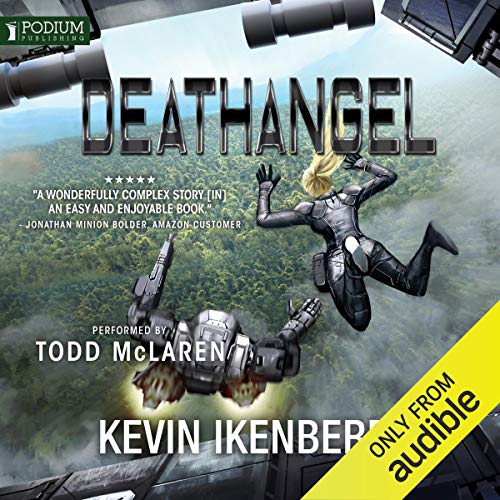 Peacemakers. The Galactic Union’s most capable enforcers and resolute negotiators, their name alone elicits fear and awe among the Union’s citizenry. When necessary, the Peacemaker Guild deputizes citizens to carry out special missions of great difficulty and danger.

The only person ever to land a Combat Assault System, Personal (CASPer) from high-altitude free fall without a parachute, Tara Mason’s career as a mercenary showed promise, but it crumbled under poor choices and even worse leadership. Given a chance to clear her name and restore her reputation, she’s agreed to undertake a mission of critical importance to the Guild.

With two Peacemakers, the near-AI Lucille, and new allies at her side, Tara Mason and Force 25 seek out the tested professionals of the Victoria Forces, who face a serious threat from a shadowy adversary. The Victoria Forces, though, are no pushover, and when threatened, they respond with CASPers, tanks, and flyers at the ready.

Taking the field alongside their friends, Tara Mason and Force 25 charge into battle, unaware that events throughout the galaxy are shaping the race to recover Jessica’s father and his secrets. The time to fight has come, and Force 25 must win the day - against overwhelming odds - or the Galactic Union, itself, may be the next casualty of the Omega War!

What listeners say about Deathangel