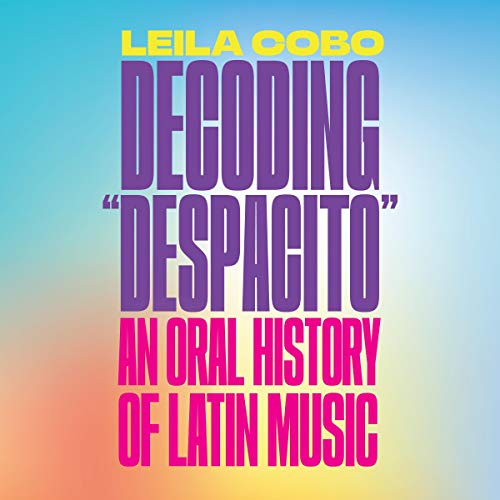 A behind the scenes look at the music that is currently the soundtrack of the globe, reported on and written by Leila Cobo, Billboard's VP of Latin Music and the world's ultimate authority on popular Latin music.

Decoding "Despacito" tracks the stories behind the biggest Latin hits of the past 50 years. From the salsa born and bred in the streets of New York City, to Puerto Rican reggaetón and bilingual chart-toppers, this rich oral history is a veritable treasure trove of never-before heard anecdotes and insight from a who's who of Latin music artists, executives, observers, and players. Their stories, told in their own words, take you inside the hits, to the inner sanctum of the creative minds behind the tracks that have defined eras and become hallmarks of history.

“An up-tempo journey through some of Latin music’s greatest hits.... The narrative is rapidly paced, just like the music that fills its pages, and is best served while playing the songs it chronicles. At its core, this is a book about believing in what many considered impossible: “It’s too much Spanish,” said American radio programmers about the titular megahit, which demonstrates the power of music to change attitudes. There is something special about learning the magic of this music from the people who were there and how seemingly niche sounds like salsa, which began in the streets of New York City in the 1960s, would end up resonating in places as far-flung as Japan. The organizer and host of Billboard’s annual Latin Music Conference, Cobo is a highly knowledgeable guide, and she delves deep into the canon to make a convincing case for Latin music as a significant driver of American culture at large. An entertaining oral history of the songs that put Latin culture on the map.” (Kirkus Reviews)

What listeners say about Decoding "Despacito"

A delightful and insightful look into the Latin music industry spanning five decades worth of history from the early 1970s covering its rise to popularity, resonating beyond niche markets, and becoming part of the pop culture mainstream and our contemporary social constructs.

Leila Cobo, a pianist, novelist, journalist, TV host and executive editor for Latin content and programming for Billboard, delivers a rigorous and carefully constructed historical outline using 19 songs as its vehicle, each becoming a stepping stone in the fabric of the Latin music’s industry.

As we read through the book and listened to each of the songs (something which we highly recommend), we found a much larger sense of appreciation, thanks to Cobo’s technical insights into the tunes, arrangements, and melodic quality, as well as the carefully outlined backstories that provided the appropriate context to better understand their origins and what made them so unique.

Decoding Despacito is a history lesson on what makes Latin music so fascinating. Each of the songs representing a major milestone towards becoming familiar sounds in the mainstream. These were songs that served as flag bearers for the Latin culture, written by pioneers and innovators, sometimes staying dormant for years until finding their voice.

The book presents a unique perspective of each of those who fought to bring the song to life and into the market; songwriters, artists vocalists, producers, arrangers, spouses, and the anonymous stories that inspired some of the lyrics.

The beautiful and poetic narrative full of colorful and rich stories are evidence of Cobo’s mastery as a seasoned storyteller and her extensive knowledge of the music industry. It all makes for a beautifully written, timeless, and extremely relevant read.