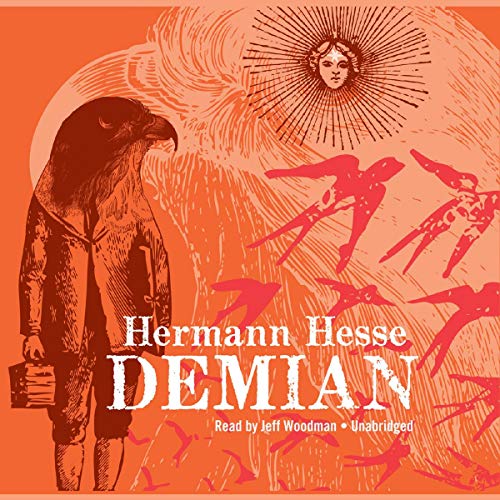 Here is the dramatic story of young, docile Emil Sinclair's descent - led by precocious schoolmate Max Demian - into a secret and dangerous world of petty crime and revolt against convention and eventual awakening to selfhood. A brilliant psychological portrait of a troubled young man's quest for self-awareness, this coming-of-age novel achieved instant critical and popular acclaim upon its 1919 publication. A landmark in the history of 20th-century literature, it reflects the author's preoccupation with the duality of human nature and the pursuit of spiritual fulfillment.
©1925 Fischer Verlag; 1965 Harper and Row, Publishers, Incorprated; 1948 Holt, Rinehart & Winston, Inc. (Introduction) (P)2008 BBC Audiobooks America
Classics
Show More Show Less

What listeners say about Demian

I loved the end very much.....I am struggling to express the various emotions I felt while listening to this story.... the way Franz Kromer was included in the end.... too good ....loved it ❤❤

We listened to Demian on a long car journey. It is a very dense, complex piece of writing...but we greatly enjoyed it! We still have a few chapters left, and we tried to listen to it on the hifi at home but it's the type of story that works best in the car - just you in the pod with the narrator! It would make a good companion on a long flight, for example. The introduction, giving biographical information about Hesse, was also useful. I'd remembered him from school (Siddhartha) but didn't know much about his life. The story of Demian is interesting, because the path it's going to follow isn't obvious. The imagery and characterisations are well-drawn, I think - certainly I have pictures in my head as the narrator relates the story (I hasten to add that I am the passenger in the car!). In short, it's worth investing the time in Demian.

Moralist sounding Narration overdoes the story for me

Demian is marked as “Cain” of the story “Cain and Able”. Using that story as a jumping off point this is a reversal of “chosen ones” born with secret knowledge. Demian is a kind of guide for Emil Sinclair. If you read Carl Jung, you’ll quickly see that much of the story was drawn from that. The problem for me isnt so much the story but the telling of it. Something about the Jeff Woodman’s reading for this book was off. It feels very pretentious especially when there isn’t a story being told but Emil Sinclair’s thoughts being hashed out. I wanted to vomit in these sections - reminded me of narration on Christian Right Wing radio. So, for me, a better narrator who could temper the story without coming off as preachy would have served this project better. I usually am careful listening to the audible reading samples, I missed this one. Listen to Carl Jung’s “Memories, Dreams and Reflections” instead. You’ll get the exact story with far greater depth and insight and far superior narration.

hard to understand but really such an amazing story that really is personal. thanks kim namjoon #btsarmy

Books that make you a better person.

This book is a guide and a journey in which you will re-discover yourself, beliefs, religion, and maturity..

No doubt this book must be read more than once through your life...

this little book has taken me six months to get through. every so often, a passage or phrase would hit me a little too closely to home, and i would need to put it down. i don't even have the words to explain why this book has affected me so deeply, but i know it's one i'll be returning to again and again over the course of my life. thank you, namjoon, for the recommendation.

Absolutely new favorite book, an absolute master piece, and the reader's performance is amazing too., but God, this book...

I understand BTS would find so inspiring

Beautifully written. It touched my soul. Hesse has a way with words. I'm forever changed.

great in its time but dated

this book had great meaning to me in the 1960s, but I am now much older and it no longer makes for important reading. Perhaps it still works for current day adolescents because the themes remain significant for that age group. But I'm doubtful.

When I was a kid, this book was one of my favourite ever. Now, ages after, I bought this audiobook. I was amazed again.

A thoroughly engaging and thought provoking story from onset to completion. A really wondrous tale. The performance of the narrator is filled with vitality, energy, and spirit. One of the best I have heard.

Really a great book, especially for someone interested in psychology and depth psychology more specifically.

Some of the best narration I’ve heard too

This is a wonderful tale, full of words of wisdom. My only slight complaint about this audio version is the American accent of the narrator. He doesn't do a *bad* job, I just can't get over his accent.

What on earth did I just read? Self-indulgent pseudo-religious adolescent witterings of a spoilt little boy. I don’t know what this book is for. Nothing really happens, none of the characters are interesting, the best features of this book are that it was short and it was free.

Gripping from start to end

Engaging and fascinating from the start, this shortish story covers a lot of ground at pace and with depth, and builds up many memorable multidimensional images along the way.

An interesting read, with a very spiritual theme

Demian is an enjoyable book. It is heavy on the spiritual and religious imagery and themes though (if you are not a fan of either of those, you might want to steer clear). At times I felt the book would meander a little, but there were parts that gripped my attention and fascinated me.

It's definitely not for everyone, but it is good to experience nonetheless. The reader is also very good and conveys the story with plenty of emotion and sound articulation.