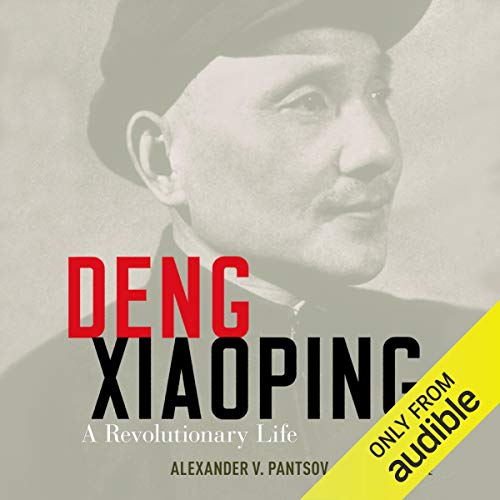 Deng Xiaoping joined the Chinese Communist movement as a youth and rose in its ranks to become an important lieutenant of Mao's from the 1930s onward. Two years after Mao's death in 1976, Deng became the de facto leader of the Chinese Communist Party and the prime architect of China's post-Mao reforms. Abandoning the Maoist socioeconomic policies he had long fervently supported, he set in motion changes that would dramatically transform China's economy, society, and position in the world. Three decades later we are living with the results.

China has become the second-largest economy and the workshop of the world. And while it is essentially a market economy ("socialism with Chinese characteristics"), Deng and his successors ensured the continuation of CCP rule by severely repressing the democratic movement and maintaining an iron grip on power. When Deng died at the age of 92 in 1997, he had set China on the path it is following to this day. Alexander Pantsov and Steven Levine's new biography of Deng Xiaoping does what no other biography has done: Based on newly discovered documents, it covers his entire life, from his childhood and student years to the post-Tiananmen era.

Thanks to unprecedented access to Russian archives containing massive files on the Chinese Communist Party, the authors present a wealth of new material on Deng dating back to the 1920s. In a long and extraordinary life, Deng navigated one epic crisis after another. Born in 1904, Deng, like many Asian revolutionary leaders, spent part of the 1920s in Paris, where he joined the CCP in its early years. He then studied in the USSR just as Stalin was establishing firm control over the Soviet communist party.

Overall it's a good book. I picked up some information previously unaware. The biggest question that I have is how the author could possibly gain access to a lot of private conversations. Much of that would not be in written form anywhere. I have serious doubt that the Russian archive could have such private conversation between the most senior and secretive leaders of China. That's a huge issue for me because it deals with the credibility of the entire book.

Deng Xiaoping was a devoted member of the communist party. Unlike Mao Zedong, Deng Xiaoping left almost no paper trail which has made it difficult for historians. He was noted to be crafty, and an obsessive bridge player. Deng Xiaoping was educated in France.

Pantsov, a professor of history at Capital University in Ohio, has done extensive research into the life of Deng Xiaoping. Steven I. Levine is a research faculty associate in the Department of History at the University of Montana. They spent years combing Russian achieves, obtaining access to Chinese documents and interviews with people. Obtaining as much information as the Chinese would allow.

The book is divided into three parts. The first part covers Deng’s life from birth in 1904 to meeting Mao in 1927. The second part covers his life with Mao up to 1950. The third part covers 1951 to his death and includes his denouncement during the Cultural Revolution. He gained control of the Communist party after the death of Mao. Deng Xiaoping was the one who ordered the Army into Tiananmen Square. Pantsov states that Deng Xiaoping was responsible for reducing poverty in China by over 50%.

The biography is well balanced and primarily well researched. The book also covers some of the history of China during this timeframe. The book is somewhat long at 22 hours. George Backman narrated the book.

Amazing performance, I hope the narrator has done more books on China. I am a fan.

A well-balanced portrait of an important figure

This was a long book, but it could have been even longer and I would have kept listening. This is a good portrait of Deng that neither deifies nor demonizes him, but rather uses a wealth of sources to paint a complete picture of the man, warts and all (probably as Deng would have wanted it). This book does focus on Deng, recommend that potential readers/listeners go into this book with some knowledge of modern Chinese historical events like The Great Leap Forward and The Cultural Revolution so that they have an idea of the bigger picture.

Mao Zedong is said to have written–one must find truth from facts. The authors of “Deng Xiaoping” infer that Mao’s aphorism is institutionalized by his thrice demoted follower, Deng Xiaoping. Deng becomes the eventual supreme leader of the Chinese communist party. As shown in this biography, Deng’s truth is drawn from Deng’s selected facts. Deng’s pragmatism leads to the meteoric rise of China’s economy after the Cultural Revolution.

Alexander Patsov’s and Steven Levine’s research and writing supports an argument that Deng Xiaoping changed the course of the Chinese revolution by pragmatically applying the aphorism of “truth from facts”. Deng Xiaoping’s leadership quadruples the gross national product of China in a twenty year period from 1980 to 2000.

Though the authors offer great insight to Deng’s role in China, the deaths consequent to Communism’s rise to power, and Deng’s participation in those deaths, are glossed over. With the exception of Tiananmen Square and the brutalization of Deng’s family, the horror of the Communist Revolution is treated clinically rather than literally. Aside from the brutal part of China’s twentieth century history, this biography is a revelation to the uninformed.

Good as an intro to modern Chinese history

Narrator was great, very pleasant and at least made an effort to pronounce Chinese names correctly.

Whether or not you support China's path, you should be aware of it.

As a Chinese speaker, I was very pleased that the narrator was able to accurately pronounce the various names and other words in Chinese--well done!

One drawback, the audio begins with the list of characters in the book--Super boring way to start the book, just skip it. The rest moves along pretty well.

If you believe that Chairman Mao is NOT responsible for the murder of MILLIONS of his people, that he is innocent of starving, persecuting, enslaving the people of China, then this book is for you.
If you are THAT DELUSIONAL than Deng is your scapegoat, along with others that Mao didn't brainwashed, terrorized, and secluded the Chinese from the rest of the world.

How the author's can claim this is an in-depth researched book is beyond me!

For the TRUE story read Jung Chang's book on Mao! A woman who LIVED while many of her family & friends didn't because of the psychotic megalomania of ONE man that was insidious enough to enslave a population.

A well written, scholarly, and interesting romp through some of the most turbulent years in Chinese history.

Being interested in this topic I found this book very enjoyable... narrator is most suitable

was a really good in depth biography, but I would only suggest it to those who are really familiar with chinese history. Without that history you get lost within all the names of the chinese party cadries.

Mao's cultural revolution was inflicted upon Deng and China. For me the book provides insight on how this quiet administrator reversed its effect firstly upon himself and ultimately on China. He was not going to let the students revolt stop him... but I don't want to give too many spoilers;-)

This is an extremely interesting book that really explains all the facets of Deng Xiaoping's life from his childhood onwards. It helped me to understand the reasons why Deng Xiaoping is still greatly respected in China in spite of the suffering he inflicted on his people due to his policies and experiments. The book was very well read with great pronunciation of all the Chinese names.