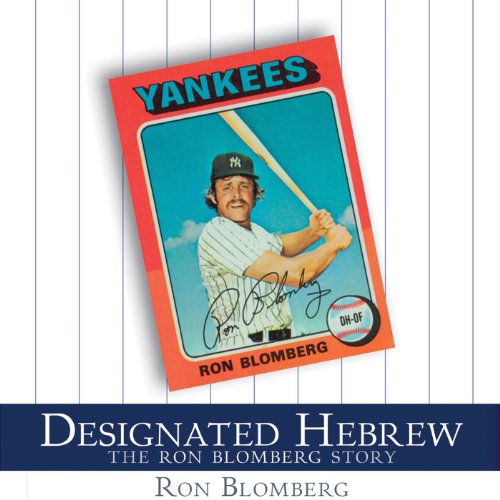 In 1967, "Jewish" and "Major League Baseball" were nearly mutually exclusive terms, but a young player named Ron Blomberg helped change the face of the league for good when he was drafted to the New York Yankees. In this performance of Blomberg's autobiography, Designated Hebrew: The Ron Blomberg Story, listeners experience the rise of baseball's first designated hitter. Performed by television and voice actor Alpha Trivette and co-written with Blomberg by respected sports writer Dan Schlossberg, this memoir inspires with its tale of an unlikely sports legend.

When young Ron Blomberg told his friends he wanted to be a Major League Baseball player, they practically laughed him out of town. Jewish kids just did not do that in the late 1950s, with the exception of a rare superstar like Sandy Koufax. Fortunately for Blomberg, his parents were a different story. As long as he was happy, they had no problem with their son growing up to be a doctor or a lawyer or a ballplayer. So, with his parents blessing, he prepared to ride his athletic skills as far as possible.

Some 45 years later Ron Blomberg is viewed as a trailblazer. In addition to being the first designated hitter in the history of Major League Baseball - an accident of fate - he was also the first significant Jewish player for the New York Yankees. The only lantzman who preceded him to the Bronx hid behind the pseudonym of Jimmie Reese. Blomberg did not believe in hiding, either from pitchers with overpowering fastballs or from the baseball fans of New York. A witness to cross-burnings and synagogue bombings in his youth, Blomberg felt relieved when New York's large Jewish population embraced him. He loved people almost as much as he loved to eat.

Blomberg wore his religion on his sleeve and jumped at any offer of a free lunch from the beat writers assigned to cover the Yankees. As long as there was a corned-beef sandwich in it for him, he was there. Unfortunately, corned beef could not do for him what spinach did for Popeye. He had great hand-eye coordination, a powerful left-handed stroke, and a willingness to work hard - but he failed to avoid the injury bug. Once billed as "the next Mickey Mantle," he managed only 52 home runs in his career. During his time in the Bronx from 1969-77, however, Blomberg witnessed the arrival of both George Steinbrenner and Billy Martin, and watched the Yankees battle themselves as well as their opponents in 1976 as they won their first pennant in 12 years and their first World Series in 15 seasons. Ron Blomberg's story is more than a baseball tale, but also more than a religious tale. It is the story of a Designated Hebrew - and there is no other tale quite like it.

What listeners say about Designated Hebrew