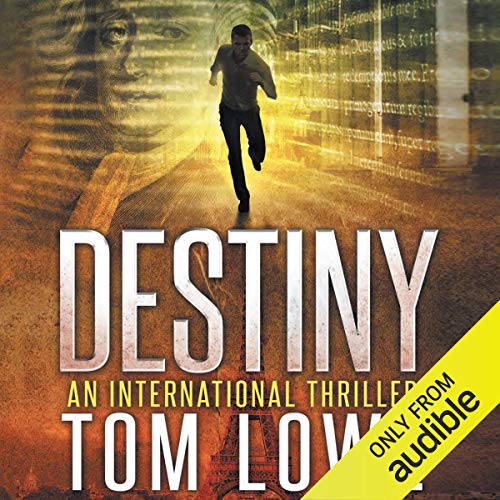 Editors Select, June 2015 - Destiny has all of the elements you could want in a thriller – political intrigue, code-breaking, ancient prophecies, a hint of mysticism, and of course, murder. Tom Lowe puts it all out there in his latest standalone novel. When Paul Marcus - a former CIA code breaker still mourning the tragic murder of his wife and daughter - is called to Jerusalem to decrypt the lost papers of Sir Isaac Newton, he finds himself caught the midst of an international political and power struggle. Destiny is a fast paced can't-put-down thriller that requires the listener to suspend belief... But only just a little. Laura, Audible Editor

When former CIA code breaker Paul Marcus receives the call, he thinks it's a hoax. He's asked to analyze a cache of papers found locked in an old trunk. They were the last manuscripts written by Isaac Newton. Using Newton's math and notes, Marcus begins to see a pattern leading to a prophecy so frightening, to reveal it will change world events.

At the time of his death, Newton was searching for ancient biblical codes that may open a locked window into future events. Newton helped explain gravity - but could he do the same for human destiny?

What listeners say about Destiny

A Good, but not Great Thriller

With mystery, adventure, conspiracy, and the potential end of life on earth as we know it, this story has all the elements of an epic novel. It doesn't quite have the writing to carry it off. This is "The DaVinci Code" meets "Raiders of the Lost Ark" with a bit of "The Bible Code" thrown in for good measure. Paul Marcus is a former NSA code breaker who took time off to break the genetic code is asked to carry on the biblical scholarship of Isaac Newton. He does so, but we're never sure how. Equal letter spacing is briefly mentioned, but the primary method of determining ancient prophecies is to put Newton's writings into a computer and expect magic. Marcus gets help from some wise sources, but their wisdom is never explained. Were these advisors ordinary mortals or something more? One clue requires the full moon each November to be in the exact same position in the sky. (I hate to break this to the author, but this doesn't happen.) The book treats some biblical passages such as "Now I see through the glass darkly, but then face to face" and "They shall beat their spears into plowshares" as obscure texts that would only be familiar to biblical scholars. I'm no biblical scholar, but they are very familiar to me. The former passage is a partial metaphor for this book. We see key prophecies through a dark glass filter, but they are never fully explained.

I'm not sure where the other commentors were coming from, but I really enjoyed Destiny, narrator and all. It's an exciting adventure, with all the elements for an entertaining listen. Hidden codes, murder, deception, conspiracies.

The narrator did a fine job too in my opinion! Listen to the sample, you can tell for yourself if you do. It moved at a good pace. Lovely escapism fiction!

Starts off with an interesting plot, but drags on and on. Very repetitive story telling.

In the space of about 5 minutes the deputy director of the NSA explains to the ex CIA analyst what collateral damage is and the Secretary of State explains to the same analyst that Iran is a terrorist state - your disbelief will not be suspended!

What disappointed you about Destiny?

Contrived, over published... So far fetched it exceeded the limits of my easily entertained mind...

Would you be willing to try another book from Tom Lowe? Why or why not?

Stick to one major catastrophe and you might be on to something... Oh, and drop the excessive adjectives. (in the wake of the earthquake... "the blue azure sky") Really?

simply too much emotion. Woke me up a couple of times...

It was long - lots of commute time

I'm really not as much of a butt head as I come off here. This one simply pushed me over the edge.. Sorry Tom

I so wish I had not bought this. The dialog is horrible. I gave this a good try (listened to an hour and a half). Decided this is definitely not worth another 15 hours of my time.

Horribly written book - Returning this one..

What disappointed you about Destiny?

It had a lot of potential but the writing style was that of a 12 year old student rushing a homework assignment to his teacher.

This book qualifies as one of the worst ever written, in every respect. The story is so ridiculous, filled with cliches, and loaded with duplicative dialogue that the only mystery here is why anyone published it. The writing is childish - no, that's an insult to children; the writing is dreadful--as is the unintentionally-hilarious narration. At best, this book (shortened considerably) reads like a child's bible story. But how do I really feel? Terrible for wasting a minute or a cent on this so-called "thriller."

I can't take any longer!!

If you're looking for a book with religious references back to the bible, possible ties to Issac Newton and able to allow for some leaps of faith on how did they figure out that..

This book had potential for me. Based on the description, it sounded like a Dan Brown sort of thriller. Smart main characters, intriguing idea and 'an international thriller' to boot!! I really got into the parts where the characters were exploring and investigating.

What killed me was the dialogue. I couldn't take it!

What do you mean?

Well, I could never relate to the two main characters inner demons. And those demons came up in almost every chapter. "Oh my, you just have to help me with ____." to some character that should have absolutely no part in it. How is the coffee shop owner going to know why that thing happened to you 2 years ago??

What else is there?

Oh man, the repetition. We have the main character, basically repeating himself to two/three people in a row. Once to his former boss, again to his former (the female lead) co-worker, again to the coffee shop owner. I got it, really, I did.

What are you not telling me?

Lastly, one of the main dialogue mechanics used over and over and over, is asking "what?". One character will be revealing some important information to the main guy. He'll then ask "What do you mean?" and the first will go into a long description of how something they are looking at is related to the coming apocalypse.

I think the narrator tried to create excitement in the dialogue of the characters, but it only emphasized the points I reference above, repetition.

If you could play editor, what scene or scenes would you have cut from Destiny?

Scene 1: Main characters are in catacombs under Jerusalem. It's pitch dark, but they have a trusty flashlight.

Earthquake (aftershock) happens, she drops the flashlight and they are plunged into darkness.

Lights torch from wall sconce and they continue to explore; finding an awesome artifact.

(note: Earlier in the story, same male character used the 'torch' app on his phone as a flashlight, now he's completely forgotten it??)

I made it 10 hours into this 17hr book. The action scenes kept me going on (oh it's getting better), then they would talk...

Started great, about 10% in (this is EXTREMELY LONG) I checked to see how long this book was, it is 17-1/2 hours. I began thinking I was not going to make it. I kind of push myself to finish books unless they are just horrendous. This is not horrendous, it is just tedious. Had this book been about 1/3 shorter and tighter I think it would have been good. I found myself "skimming" (bless that fast forward) just to get through it. You also have to have some knowledge of history and current events to understand some of what is going on.