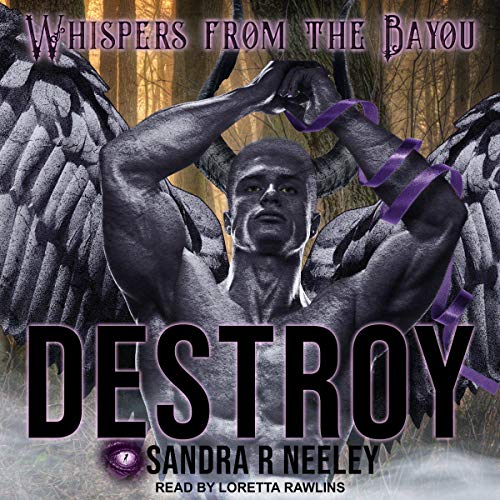 Destroy is beautiful, strong, charismatic, and charming. He is also selfish, shallow, petty, and jealous - or is he? One misunderstanding centuries ago resulted in his being labeled as not good enough, untrustworthy, self-serving. To hell with them, he knew who he really was! A strong, dependable, good male of strong character who was very pleasant to be around and even more pleasant to look at. If only he had a female or even friends to notice those things. He'd been alone for so long the bitterness had begun to seep in. Why did no one give him the credit he deserved? Why could no one see him, the real him? Other males had friends, other males had found their females - why not him? It was maddening to watch it and not be able to experience it.

Then suddenly, out of the blue, there she was - all he had to do was be himself, allow her to see his magnificence and convince her that she's not evil. Her gifts are of no consequence to him. Yes, he feels her gift - her radiance, the light pouring from her. But that's not why he's drawn to her. It's because she's his, his very heart, his soul. Now if he can manage to keep her alive long enough to love him back, while he's also trying to prove that he's a male of value to his community, he may have a shot at this mate thing.

What listeners say about Destroy

The 1st book was AMAZING, the 2nd book was AWESOME. Another book I truly enjoyed, the characters in these 2 books are Sooo Great. I usually don't like too many outside stories, but these support characters and side stories complete these books. And Lily, OMG, I love her. I can't wait for the other books.

Book two of series was also pretty good, although not as good as the first book. I hope the next book is about Lore and Enthrall. I love the character names. Rowan’s character just didn’t seem to mesh with me and even though I loved Destroy’s character; I think Enthrall and Lore were more deserving and more interesting for a second book. Hope these two will be main characters of the next book.

This series could go on forever and I'd be happy!

Destroy ended up having more depth than I had imagined, but he and Rowan still felt somewhat like side characters for some reason. This book felt more like 1.5 to more than book 2, like we were just reading the prologue to Enthrall's story. That's just my own take though, and it gave me no less laughter and enjoyment than the first one. I have found that this series has quickly become a favorite for me, and the writer... wow. She needs to write more! I know she's written other seires and I will read those two, but I'm too invested in this one for now and the grand finale is going to be freaking epic.. Lore. I just can't wait for that and to see what happens with Lily and her dragon. This writer gives you enough to keep you guessing and interested, but doesn't put you so far toward the edge of the cliff that it feels unbearable. Telling the stories of multiple characters at once as their lives inch forward bit by bit is a fantastic strategy to make the flow of the plot feel natural and feasible. I was also worried about Carolina dying early because she's human, so I was glad that was addressed in this one as well. Again, like in the first book, the narrator was awesome and I love her voice and the beautiful range of characters. I'll be sad when I won't be able to hear it as I read the rest of the books, since there aren't yet audiobooks for the last three books, but I don't think I can stand to wait for those to come out on Audible and I have to read them ASAP! Love this author, love this series, 5 stars all around!

I've just finished Destroy! I've found myself falling in love with these characters! But why aren't the other two books in Audible?!

I have really enjoyed this. The story is unusual and that makes it so much fun to hear! Loving this series.

I love this series. I so very much want the next book right now!!!

I love Destroy. I will admit in the first book I did not like him very much. If it wasn’t for Carolena actually being such a great person and talking to him no one would have known and he wouldn’t have been able to show what a great gargoyle he is.

I love how this is the 2nd book and I usually have something that I do not like about the main female character, they are usually to bitchy or whiny. But not in either of these books, they have strong moral compasses and compassion while having backbones.

I love this world and all the characters, I'm truly sorry to have finished the two books available.
I do hope that more are to come.
just wonderful.

I have enjoyed this series so far so I am hoping that there will be another one on here soon... Hint Hint !!!...xx

Destroy is the second book in Whispers From the Bayou series. And I am kind of speechless when it comes to telling you how much I enjoy the series, and how much I love the characters. Love the first book, and this one too. This one has more humor, but keeps on telling us about the same characters as before. Destroy and his lady love being the main focus, but barely so. As it is more as the story just keeps on flowing. Continuing to build up atmosphere for more to come. For me this is the perfect set up. Seemingly effortless and at the same time intense, joyous and thrilling journey of the characters, keeping me at the edge of my seat. As in the first book the storytelling is gripping and wondrous, the worldbuilding effortless and perfect. The story is a world of it´s own, delightfully engulfing with it´s luring mysteries. To add to it all, Loretta Rawlins is the perfect narrator for the story.
By now I have both the audio books and all the series on kindle. Is there any hope the rest of the series will become available on audio?