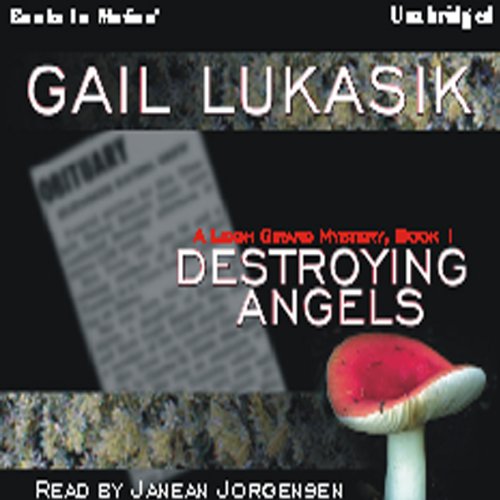 An amateur naturalist dies of mushroom poisoning, a day later the local librarian kills herself, then the buried bones of an infant are discovered. Chicago native Leigh Girard is finding life in a small town can be fatal. Determined to start a new life after her mastectomy, Leigh flees to Wisconsin's Door County peninsula, where she takes a job as reporter for the local newspaper. Her first assignment, the naturalist's obituary, turns into a hunt for a murderer.
©2006 Gail Lukasik (P)2009 Books In Motion

"The stark beauty of the Door peninsula provides the backdrop for this riveting debut thriller. Plan on an all-nighter." ( Kirkus Reviews)

not as good as I thought it would be

The story crept at a snails pace and the characters were not very likeable, even the main one that was a breast cancer victim. ( this may sound unsympathetic but I got tired of hearing "the bright pink scar") The narrator seemed at times to be more interested in e-n-u-c-i-a-t-i-n-g than just reading the story.

I don't think the author knows anything about being in Door County in the fall/early winter. It just wasn't credible on several levels.

The narrator had the flattest monotone I've heard in a long time. Not someone I'd ever have read a book again.

Kept our interest for a whole trip.