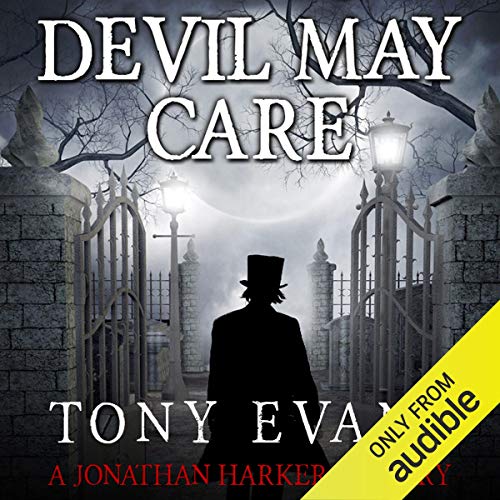 Two years have passed since the dramatic destruction of Count Dracula. And Jonathan Harker has settled down to a quiet life as a junior partner in a law firm. But his reputation is about to catch up with him.

As word of his abilities spreads, clients are turning to him for help with problems which appear to have an involvement in the supernatural. His first case takes him to Cornwall, where the Haywood family are worried about the imminent marriage of their daughter, Flora, to the elusive Sir Owen Velland.

Flora had been engaged for two years to the amiable Doctor Goodwin, before suddenly breaking off the relationship in favour of Sir Owen. Yet Sir Owen had been recently widowed under very suspicious circumstances and rumours are circulating in the small Cornish town that his unnatural powers and abilities may have some involvement with devil worship.

Are these rumours just idle gossip? Or is there a dark truth behind what people are saying? Can Harker use his knowledge of unusual and the occult to befriend Sir Owen and discover his secrets? Or has he come up against an opponent even deadlier than Dracula himself?

Devil May Care sees the return of Jonathan Harker, the hero of Bram Stoker's classic Dracula, in a chilling new historical mystery series. Tony Evans is a full-time writer. His other publications include the Hester Lynton Mystery series and adaptations of classic novels [for the “Real Reads” series]. He lives with his wife in the Yorkshire Dales.

I could do better

Can't believe this was recommended by Amazon. Predictable, mundane, not worth your time or money.


This was an excellent original story featuring Jonathan and Mina Harker from Dracula as they encounter more supernatural intrigue. Beautifully capturing the era and the characters, this was an entertaining adventure. Do Jonathan and Mina stop the nefarious Baron and his evil deeds? You will have to read and find out. I read this book using immersion reading while listening to the audiobook. Narrator Peter Noble was superb, his beautiful accent embellishing the narrative.

Devil May Care
By: Tony Evans
Narrated by: Peter Noble
Used my Kindle Unlimited to get this book and it was a great use of it. I really enjoyed the book, I felt like I was back in time. This was a good supernatural mystery and the narrator was perfect for the feel of the book- for the time, the people, the experiences... Great job!

A good start to a new series.

If you could sum up Devil May Care in three words, what would they be?

What was one of the most memorable moments of Devil May Care?

The hero and villain's first confrontation.

Which character – as performed by Peter Noble – was your favourite?

The hero, Jonathan Harker, although his wife, Mina comes a close second.

I hate it when books are turned into films, so this question would be irrelivant.

I really liked the idea for this book, and I understand it's to be the first in a series. It's great to find a story that concentrates on a mystery element rather than lots of grizzly detail and graphic violence, and the fact that it was set in Victorian England was so much the better. It lent a good atmosphere to the story. The book is perhaps a little short. I felt there were some scenes the Author could have done more with. He could have showed us what happened instead of merely telling us. It would have helped to increase the suspense and a bit more emotion wouldn't have hurt, but all in all, a good book and I'm looking forward to reading more of this series.