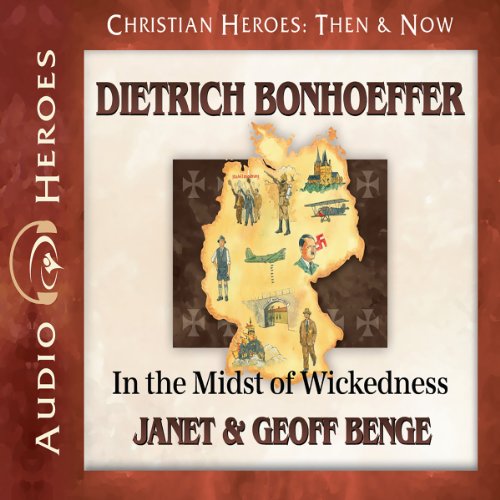 Born into a loving family, Dietrich Bonhoeffer (1906-1945) pursued a life as a pastor, teacher, theologian - and spy. He spoke out about the trouble in Germany when Adolph Hitler came to power, urging the Christian church to rescue disparaged people groups and resist Hitler’s evil empire. Accused of being a troublemaker, Dietrich continued on fearlessly in the midst of wickedness. His work as a spy in the German resistance and participation in a plot to assassinate Hitler led to imprisonment and eventual execution. But the lesson of his life story remains: "Not to speak is to speak. Not to act is to act."

What listeners say about Dietrich Bonhoeffer

It was a very good background story of one of the most prominent modern day Christian evangelicals. His life, though very short, spoke volumes of what it means to walk the talk of Christianity.

magnificent man who was brought life, a must read for history buffs or Christians alike.

I would surely recommend this audiobook. Why? As far as I am concerned it should be mandatory for all people in America and in the Free world. This book is a great history lesson as to how people can be led astray by bad leadership, and what can happen when freedom is removed. Bonhoeffer has some great spiritual writings,, but this is not one of those. This is history from a unique perspective, of someone living through WW1 and WW2 (well almost to the end of WW2)

It read like a history book from an insider!

The untimely death (right before freedom came) of the main character.

"May I be like this man, O Lord" such a blessing.

The history aspect alone makes this my Benge fave

I know, this story isn't a fairytale ending in any way, shape or form. But, anyone that serves God with all their heart knows that life isn't always a bowl of cherries. Ok, so you've been warned, this isn't a happy-happy story.

After saying all that, it was interesting to hear about the 2 world wars from a German prospective. At the beginning of WWI, even the kids thought it was a happy, wonderful time to begin a war. But, as soon as you lose someone in a war, it's not so happy anymore. When Hitler began his march towards WWII, the attitude in Germany that wasn't pro-Hitler; was a very sad, here-we-go-again-attitude.

Although, hearing the line-upon-line march towards Nazism is hard to hear; hopefully it keeps us watchful for the same mistakes in our future. Hearing this story, reminds me to not always take the easy and safe road. Sometimes, you have to take the hard road that doesn't end in a happy ending, except it does end in an eternal happy ending. This bit of history is well worth your time and money to listen to.


I learned of the depth of Bonhoeffer's resistance to the Nazis and the ultimate price he paid, all the while serving our Lord Jesus Christ. A great audio book, informative, enjoyable, and a very sober ending.

This book was AMAZING and HEART- WRENCHING! EVERY single person should learn from history and the dangers of not learning from history could be detrimental to millions of souls!

We must remember that Adolf Hitler's hate and prejudice destroyed the lives of millions of people. We must not allow that to ever happen again. Great book.

This was a compelling story with an engaging performance. Intriguing and entertaining for all ages. Bonhoeffer is an example of someone who had a deep and personal relationship with God and it was manifested through his dedication and service to his family and his church.

I studied German history for gcse but this puts a human and German, as well as a Christian face on it.