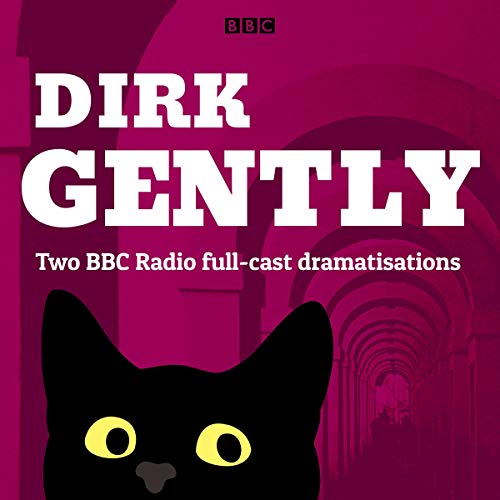 In Dirk Gently's Holistic Detective Agency Dirk Gently has an unshakable belief in the interconnectedness of all things, but his Holistic Detective Agency mainly succeeds in tracking down missing cats for old ladies. Then Dirk stumbles upon an old friend behaving bizarrely - and he's drawn into a four-billion-year-old mystery that must be solved if the human race is to avoid immediate extinction.

In The Long Dark Tea-Time of the Soul Harry Enfield exuberantly returns as Dirk Gently, who, fallen on hard times and dressed as a gypsy woman, is using his irritatingly accurate clairvoyant powers to read palms. He is saved when a frantic client turns up with a ludicrous story about being stalked by a goblin waving a contract accompanied by a hairy, green-eyed, scythe-wielding monster. When Detective Superintendent Gilks decides a headless body found in a sealed room is the result of a particularly irritating suicide, Dirk is plunged into a mystery where the interconnectedness of all things is tested to the limit.

Pleasantly surprised by narrative, folded into the dialogue. Most entertaining arrangement. Adams would have approved!

Absolutely fun from start to finish, everyone is great, as are both stories, but The Long Dark Teatime really shines.

Good for listening in the car. Got hooked and finished on the couch. Ran out of drive time. Couldn’t wait to finish. Well played👏

Mostly enjoyable. Fans will recognize the unnecessary changes and added relationships/plot elements in LDTotS, though.

Dr Who in Theater of the Mind

This was a little too chaotic for my taste. I am usually looking to relax.

this is NOT the actual books.

Very disappointing. although the title seemed odd, the description led me to believe this was both books however it's some radio show adaptation.

Didn’t enjoy as much as expected (knowing the stories well). A bit disappointed... almost like the tone was a bit off from the original, a bit forced rather than as witty?

The story is great, the cast do a superb job of bringing all sorts of life to the strange characters and situations you expect from Douglas Adams. However, the whole thing is made difficult to listen to because of bad digital artifacts in the audio compression. This title really needs to be remastered.

Audible have ruined this great dramatisation with some of the worst sound quality I've ever heard.

Will try to refund and buy the orginal CD. Burn a copy and send it to Audible. 😉

Adams himself would have loved this dramatisation. Great cameo references to H2G2, as a special appearance of Marvin.

Sorry and production excellent. Distorted sound makes me want to shoot off!

As with all things Douglas Adams, an excellent tale. Dirk Maggs doesn’t disappoint as the production of this adaptation is first class. But the distortion of the recording ruined it for me. Tried returning the title for this reason, but it’s not permitted due to licensing restrictions, or something like that.

Great radio play lovingly produced and a true homage to the original Hitchhikers guide to the galaxy Radio show.
If you are a purist and find any deviation from the text to be an affront then its probably not for you but I loved it and found the updates harmonic. Great performances, fun wacky story, good, clean fun. my only bugbear is I wish you had the option to play it through as one program rather then with credits every hour or so but then this is easily skipped through and where else can you hear an Oscar winning actress playing a vending machine.

I can’t recommend this. The audio compression makes it sound like listening underwater. Detracts from the story.

harry Enfield is a disaster as quirky Dirk, bad

Dirk is quirky and mystical, Harry only knows one output, dopey! shame shame the leading role needed someone mystical. the guy that did the tv versioning dark curly hair, he was quirky and whimsical. poor casting

the audio book itself was really good, the only thing that ruined it slightly for me was the 'credits' being read out after every chapter as it disrupted the flow. Other than that everything was great