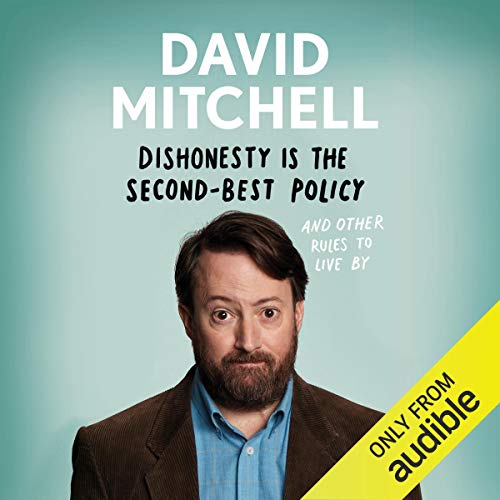 David Mitchell’s 2014 best seller Thinking About It Only Makes It Worse must really have made people think - because everything’s got worse. We’ve gone from UKIP surge to Brexit shambles, from horsemeat in lasagne to Donald Trump in the White House, from Woolworths going under to all the other shops going under. It’s probably socially irresponsible even to try to cheer up.

But if you’re determined to give it a go, you might enjoy this eclectic collection (or eclection) of David Mitchell’s attempts to make light of all that darkness. Scampi, politics, the Olympics, terrorism, exercise, rude street names, inheritance tax, salad cream, proportional representation and farts are all touched upon by Mitchell’s unremitting laser of chit-chat, as he negotiates a path between the commercialisation of Christmas and the true spirit of Halloween.

Listen to this book and slightly change your life!

What listeners say about Dishonesty Is the Second-Best Policy

It's possible that David Mitchell isn't expecting to have all that many fans in the US. This book is cobbled together from think pieces he does for a British publication - so there are many references that just shoot over my stupid American head.
My husband and I listened to parts of it together and did laugh at the stuff we did understand. We love Mr. Mitchell's humor and see him quite a bit on various British quiz shows and Upstart Crow. (not a fan of Peep Show, but my husband surely is) It was disappointing to me that not enough of it was 'gettable' though it's certainly not the fault of the author. As I said, I'm not really his target audience.

If you are up to date on all things UK, this could be for you. even if you are American.

Agree or not, Mitchell rants are great

I thought about giving four stars but then realized it was only because as an American, I didn’t necessarily know all his references. That would be wrong because I love listening to David Mitchell talking about current events, conspiracy theories etc. you don’t even have to agree with him to enjoy the rant.

I enjoyed his pearls of wisdom in Peep Show and Would I Lie to You. Highly recommend if you like The sarcastic British humor.

David Mitchell is not a comedian he is Rene Descartes bizzaro! In a very positive way! He makes the art of thinking and analyzing fun!

I really enjoy listening to David Mitchell's comedic writing. Primarily because there's an inventiveness about his gripes, it sort of puts your own values and the stuff you moan about into perspective. In a way it really just makes you think yourself silly.

Love David Michell, he kills it as always.

It's quick, maybe a bit rambley at times, but still enjoyable. I'd say I don't know a whole lot about British politics, so that's one issue I have with the book.

I loved this audio book. Just nodded and giggled along the whole way through. Despite some of this satire being from 5 plus years ago, it was still relevant, articulate and brilliantly written. Serious subjects tackled with heavy dose of Mitchell’s uniquely, nerdy silliness. Going to download another one of his books immediately. Thank you .

David Mitchell is back and just as good as ever

I swear I could listen to David whinge about absolutely anything for hours and hours.

I arrived at this volume directly from 'Backstory' and I have to say that I'm somewhat taken aback by how personally Mitchell deals with politics and the world outside entertainment. Pessimism with technological developments, bitter remoaning, frequent recourse to the idea that all wealth is properly the state's to dispose with. As the Greatest Living Statesman would say, "Sad!"

I love David’s wit and use of language to point out the ridiculous in the mundane!

Being essentially a compilation of Mitchell's Observer columns, the book makes for very 'easy listening' and is ideal for listening to alongside working, as no intense concentration is needed. Nevertheless it's quite funny - laugh out loud funny at times - but mostly dry and sarcastic. Mitchell is a self-proclaimed 'remoaner' so an open-mind/level of tolerance would be needed for those whom lie on the other side of the Brexit spectrum. All in all a good book, but if you are a regular reader of the Observer, bear in mind that it's just a compilation of organised articles that you may well have already read.

David Mitchell is an eloquent narrator and has an excellent writing style. He reasons his way through modern life and even if you don't always agree with him (and I do) you can't deny he has at least thought his view through.

Another excellent British London publish. Sure, there is the odd error... There's always going to be some errors. Considering the ink shortage in Denmark, Mr Micthel did a great job of fronting the £2k just to get this book over the line.

Mitchell is funny but the book is average

I like David Mitchell but this book wasn't that funny or clever. just random anecdotes and political bashing. not terrible but it seems more like a money grab than a well thought-out peice if comedic writing.

Wearyingly panders to Guardianistas in all columns, albeit witty at times. Not David's best work!

David Mitchell Doing what he does

if you like the logical ramblings of David Mitchel you'll love this. A series of his newspaper articles read out in his unique and entertaining way. Great value with over 8 hours of non stop thought provoking comedy.

Thoroughly enjoyable listen! David’s witty delivery makes listening to this all the more entertaining! Well worth the time

I love David Mitchell and if you do you'll likely like this. Would give 10 stars if I could but that's just bucking the social order. which in fact this book does...

Words with which you will certainly agree from a voice you would like to hear.

A refreshing tonic to the madness

I feel like David Mitchell has externalised my own inner monologue! You’ll know him from Peep Show, or Qi or The Times..

David Mitchell seems to take off where Charlie Brooker left off when he went all black mirror on us. His humour and take on all things from Artex ceilings to brexit makes me happy, as a British expat this is right up my street - a hotline to home.

Listen if you know who David Mitchell is, or if you like things like Gruen/ Shaun Micallef / Charlie Pickering /the chaser but with a UK/EU focus.

Please note, i work for Audible but all my opinions are my own.

too much English politics for a New Zealander, do love his voice and the delivery

I usually love David but this book is a non event with only the occasional chuckle.
It’s more like a fruit loops rant.

Really enjoyed it but really could have done with longer pauses between columns to better announce the change.

Glass half empty in a good way

What a great book I love listening to it so much I’m going to listen to it again just to see if I laughed harder the second time round.

David doing what David does best

Sharp, witty and insightful. Might be a bit lost on a native antipodean, but it’s like a postcard from home to this expat. About as British as British gets. Loved it.

Funny and insightful at the same time. If you like soap box you'll love this

I’ve listed to this about 4 times now. It’s hysterical and clever. David Mitchell’s reading of it makes it.