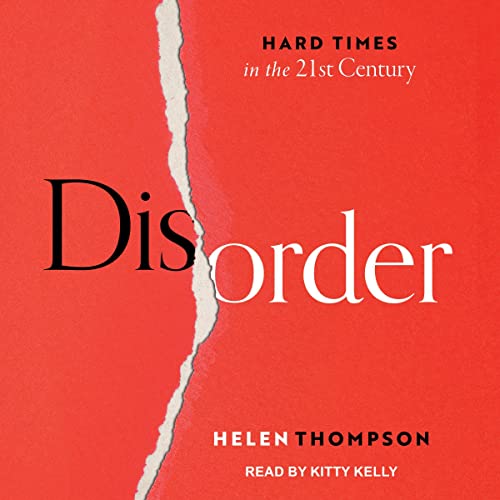 Getting to grips with the overlapping geopolitical, economic, and political crises faced by Western democratic societies in the 2020s.

The twenty-first century has brought a powerful tide of geopolitical, economic, and democratic shocks. Their fallout has led central banks to create over $25 trillion of new money, brought about a new age of geopolitical competition, destabilized the Middle East, ruptured the European Union, and exposed old political fault lines in the United States.

Disorder: Hard Times in the 21st Century is a long history of this present political moment. It recounts three histories—one about geopolitics, one about the world economy, and one about western democracies—and explains how in the years of political disorder prior to the pandemic, the disruption in each became one big story. It shows how much of this turbulence originated in problems generated by fossil-fuel energies, and it explains why, as the green transition takes place, the longstanding predicaments energy invariably shapes will remain in place.

What listeners say about Disorder

I loved the history of energy and geopolitics parts. I found the commentary on current American politics a bit simplistic. IE I think HT just regurgitated back what she read in the liberal biased media articles she read and thought she was dealing in reality.

lost in the weeds

too much detail. impossible to follow on audio. needs better perspective and insights. could have been goid.

Three threads - Geo Politics around the world; Energy; Power of the Central Banks (U.S. Federal Reserve in particular) - are discussed in great detail with extraordinary insight. The biggest 'take-away' is that we've traditionally looked at each of these three threads - as separate 'silos' to be studied. Thompson makes the point that these three threads are interrelated - and should be thought of as impacting one another.

Empires have been; now are; and will be made by their access to energy. Thompson mentions Winston Churchill's (then controversial) decision to move the U.K. Navy from Coal-fired to Oil-fired warships - giving the U.K. Navy an advantage over their principal adversary (Germany) - but also inheriting some responsibility about maintaining supplies of Oil within the Middle East (Countries and protection of the Suez Canal; protection of their Empire).

Likewise if and when there is another Energy transition - to renewables - the U.S. and China will contest for dominance in that age - Geo politics/alliances will change as appropriate.

Rise of Central Banks - U.S. Fed's Rate decisions impact the entire world - with the U.S. Dollar as the World's Reserve Currency. The U.S. Fed is now the 'lender of last resort' - for COVID related payments and other stimulus. The U.S. Fed's low borrowing rates for such a long time - has made the U.S. dollar stronger - and caused some issues with our allies.

Geo Politics - much discussion about Europe - the difference between the European Union (a political alignment) - and the Euro Zone countries that have adopted the Euro as the currency. Thompson indicates that this will be an ongoing Economic Problem for this region - citing the difference between the Nationalist viewpoint and the European wide viewpoint on who pays what level of tax to whom.

Back to Energy - Thompson feels that the upcoming decade will continue to be one of disorder - with an 'expensive' transition to a new Energy System which may keep inflation high; with the Central Banks trying to eliminate inflation - but perhaps may switch to jump starting Economic Growth (lower rates rather than higher interest rates) - and finally the U.S.- China competition - with the extension of the Belt & Road Initiative - and the 'West' not totally sure of its strategy versus China - much less towards Russia and then Iran.

Interesting - complex writing - but 'worth it'.
Should be of interest to those who read current affairs.

The story is fascinating, if somewhat hard to follow without the text in front of you. The narration, however, is extremely irritating. The voice narrator has no sense whatsoever for the pronunciation of foreign names/terms.

It’s hard to know what to rate the narrative of this book because the narration is so bad that it distracts from the text. So many names are pronounced incorrectly that eventually I just gave up, because it became too irritating. de Tocqueville, Francois Hollande, BNP Paribas, Silvio Berlusconi… on and on it goes. It’s not like these are difficult names, or that it isn’t well-known how to pronounce them. But when it’s just one wrong after another, it emphasises the extent to which this book is read like it’s a manual, rather than a narrative. There is no understanding from the narrator as to what is being read, and as a result, if there is substance to the text it just washes over you.

Rarely do I get hours into a book and am unable to tell you a single concept that I have taken out of it; almost never do I give up on a book. But in this case, both of those things were true.

A fascinating and important book

This is a fascinating historical perspective on the current global situation. It breaks down the geo-political world we are familiar with into threads and concepts many of which were new to me, but very useful in analysing where we are and how we got here. Much of the economic analysis is very technical and beyond my understanding, but I found it worth persevering with as the surrounding material is so illuminating. It’s a shame about the narrator who didn’t seem to understand what she was reading and so makes it harder to follow. She mispronounced several words all though the book (e.g. eschew pronounced estew!) but I still loved it and will re-read much of it after some more research. I would like to have heard her analysis of the Jeremy Corbyn phenomenon in the UK but this is sadly missing. Still, you can’t have everything and my thinking has been changed on several things after reading this book.

Superb book. I had to buy and read it in print because the narrator is so poorly educated that there are no end of mispronounced names and phrases. They have obviously never listened to any current affairs. I would have sent it back but the content is so important and thought provoking that it would have sent the wrong message. Author was poorly served

The writing is great. Compelling. I heard two hours of Interview with the author beforehand. I am very disappointed with the audiobook. It is sloppy. Why not a BBC English accent. I find it distracting even as an American who shouldn’t be so aware. Cambridge profs book which sounds like a (herd i show my ignorance) southeast london accent. The voice artist does many accents (I heard her other samples). This just does not sound proper.

Helen is a boss

She is an intellectual titan. Joins a lot of dots coherently and compellingly to explain how we have ended up where we are. Read this book now!

Great book, shame about the reading

This is a brilliantly written, in-depth, yet accessible look at geopolitics, spoiled by a mediocre reading performance. Mispronunciations and badly-scanned readings of sentences regularly made it a struggle for me to understand what the author was trying to communicate. I often wondered if the reading was being done by an AI, rather than by a human being who actually understood the sentences she was reading.

fascinating read, but worth taking into account fair but critical reviews from Howard Davis and Matthew Klein

A broader geographical and historical sweep!

Helen's book broadens the economic and political history of our world, bringing all within the realm of the context of today... Excellent! A post 24th Feb, Ukraine invasion chapter would be a very useful update👍 🐰

An incredible piece of work, that brings together so many elements to empower the reader to make an informed judgment on the current major geopolitical issues.

Wide ranging and suffers for it.

Came across like a thesis. But where a thesis would be focused, this was not. Difficult to follow since it jumped so frequently from year, topic and point. Felt like a badly edited Wikipedia page. Some good info but needed to be pared down and focused.